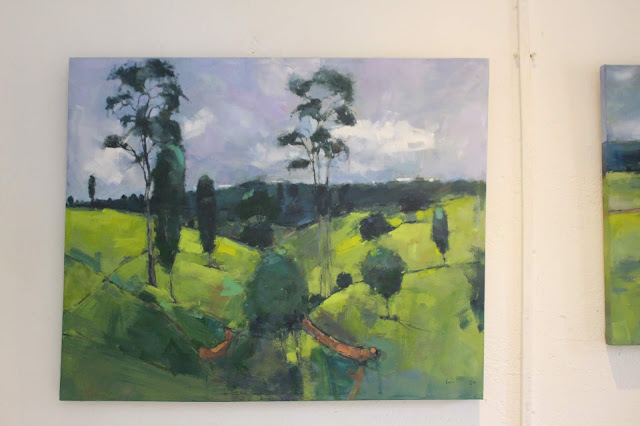 Walking into Polka Dot Gallery two days before the opening of Coster Ojwang and Arnold Jaoko’s exhibition, entitled ‘Tales of Strokes’, the timing couldn’t have been better!
To the untutored eye, one might have seen sheer confusion as the Gallery’s new manager, David Gathumbi was in the process of choosing which paintings to put up where. That meant everything was in flux. Some works were coming down, while others going up. 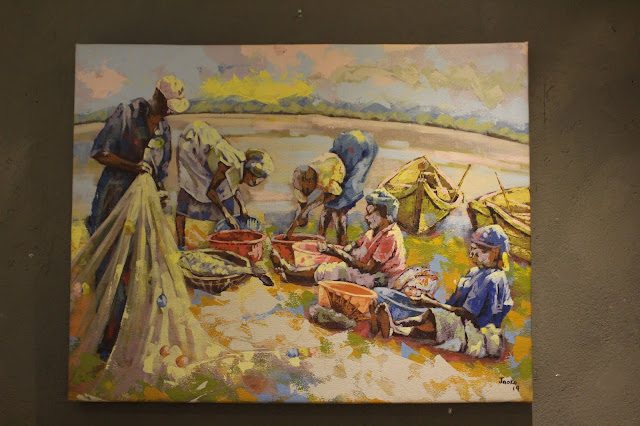 But for someone wanting to see artworks by not just two but several exceptional young Kenyan artists, it was rare and wonderful occasion. That’s because quite a few so-called ‘up-and-coming’ local artists have discovered Lara Ray, Polka Dot’s chief-curator, is especially receptive to ‘new blood’.
She’s given a number of them their first chance to exhibit in a public space where they can not just show off their art but sell it as well.
For the prospective investor in East African art, this means they need to keep a periodic eye on Polka Dot since one can never know what new gems you might find and often, they can be affordably priced. 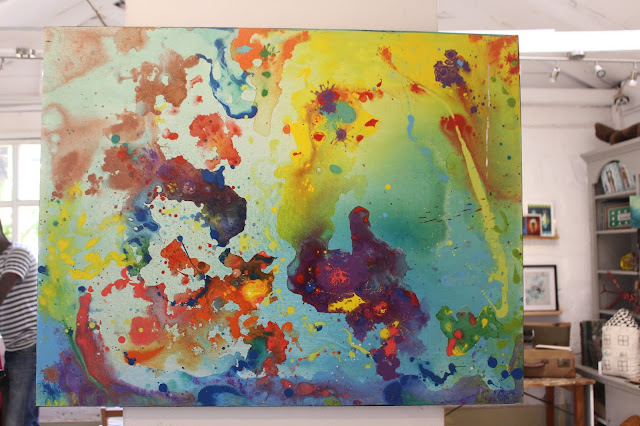 For instance, Coster hasn’t been exhibiting in the Nairobi art world for all that long. But he’s already well established and recognized for his lovely landscapes and labor-filled cityscapes. He’s also exhibited at Polka Dot before. But this time he has brought Arnold Jaoko, his former classmate from Mwangaza Art Centre in Kisumu to share the gallery walls at Polka Dot from last Sunday through 5th May. Jaoko hasn’t exhibited in Nairobi before, but he has a lovely auburn-toned color palette and his figurative subject matter is also well-executed. 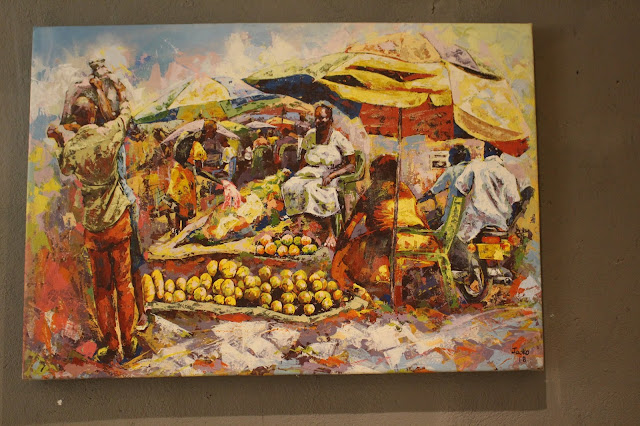 
But Jaoko is just one of a number of ‘newbies’ to the local art scene. There’s a printmaker named Robert Yigo whose miniature prints are attractively colored and filled with rural imagery reminiscent of Rosemary Karuga’s, only hers are in collage and his are print and mixed media. 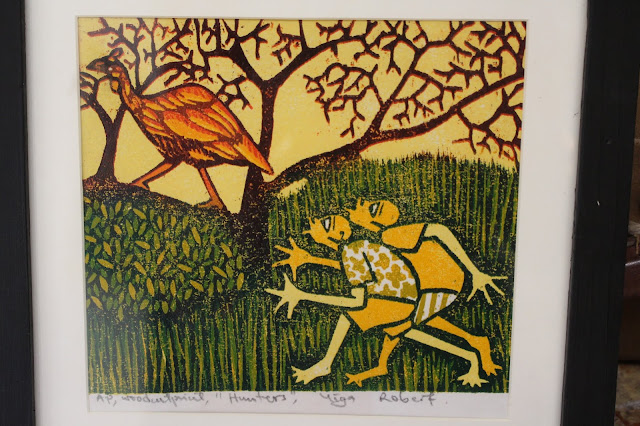 Several artists from Mukuru Art Club have also brought their works to Polka Dot. But Vincent ‘Vinnie’ Kimau, Lloyd Weche and others from the Club didn’t just bring their art to be placed on racks for visitors to thumb through. Lara actually put club members’ art online at the gallery’s website, offering a special ‘Mukuru Art Club Art Sale’ on their behalf. 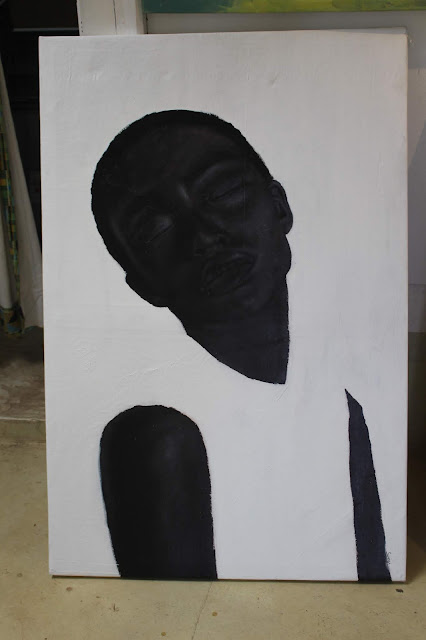 “Lara has already sold five of our paintings online,” says Adam Masava, founder of the Club who adds that online sales will go towards construction of a new artists studio.
But then, it isn’t just inside and online that Polka Dot is exposing a lot of unsung artists to the light of day. Even outside on easel and front wall, one could see artworks that would be gone by Sunday’s showcase of Coster and Jaoko’s paintings. Gone would be Elias Mong’ora’s Untitled urban scene, one of Sarah Sungi’s black and white silhouettes and the halo-ed beauty by Philip Kere who we hear normally exhibits at The Tamarind Restaurant. 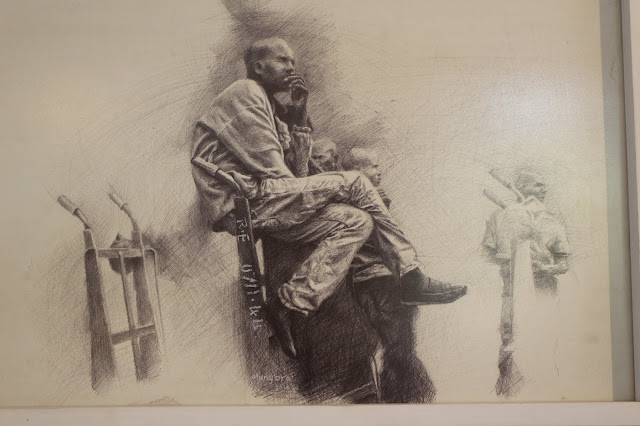 
According to Gathumbi, Mung’ora’s paintings rarely stay at the gallery for long. The Brush tu-based artist’s works tend to go quickly, he says, pointing to just two that remain up for the time being. But they too are just about to come down, as are the paintings remaining from a recent solo exhibition by Nigerian artist, Akinyemi Ajibade. 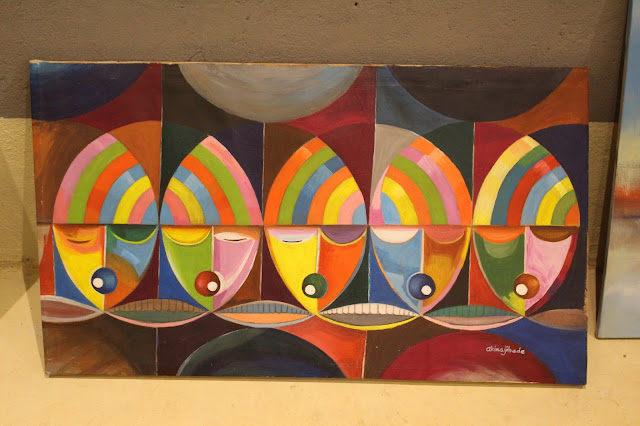 Ajibade has been in Kenya just less than two years, but as he loves teaching, he says he has settled in at GEMS Cambridge School where he teaches art. But the painter formerly from Lagos takes care that he leaves enough time for himself to keep up his career as a professional artist. His first solo show in Nairobi was in March, entitled ‘Shape of things to Come’. It focused primarily on young attractive millennial females. All designed in geometric lines and brightly-colored patterns, his paintings have a familiarity about them, particularly the few remaining in the gallery which contrast the masculine and feminine in both diamond and spherical mask-like forms.
Ajibade’s one painting, a set of circular masks, bears an uncanny resemblance to masks made by the Ngeche-based artist, Peter Kibunja, whose one spherical-faced painting is also at Polka Dot. It’s one of those still propped up against a stool, awaiting dismissal to the Gallery’s storeroom. 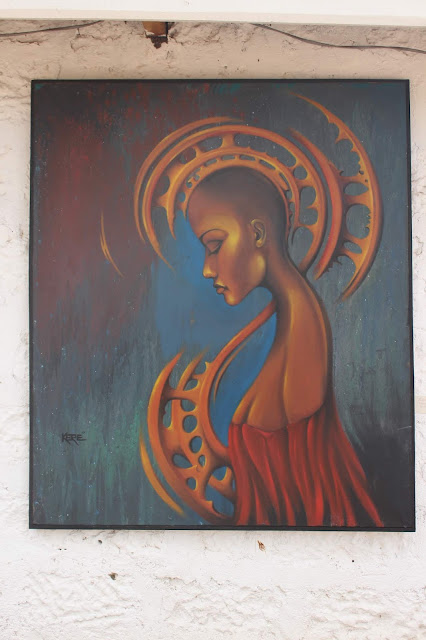 Finally, the two space at Polka Dot that don’t rotate regularly are the cupboards that Lara fills with miniature works by painters like Yony Waite, Anne Mwiti and Drishti Chawla, and the ceiling from which hang mobiles by Isaac and wind-chimes by Evans Ngure. 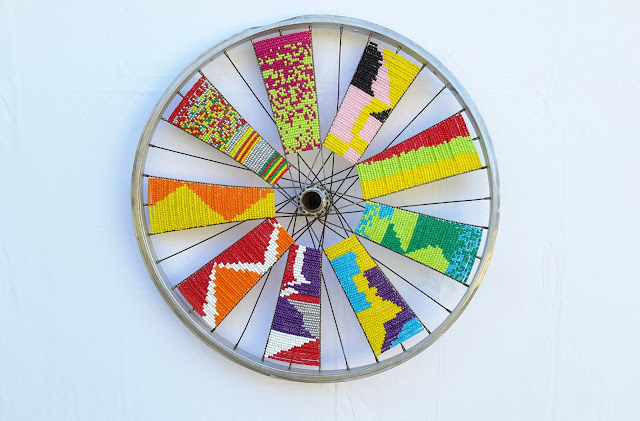 
Posted by Margaretta wa Gacheru at 11:28