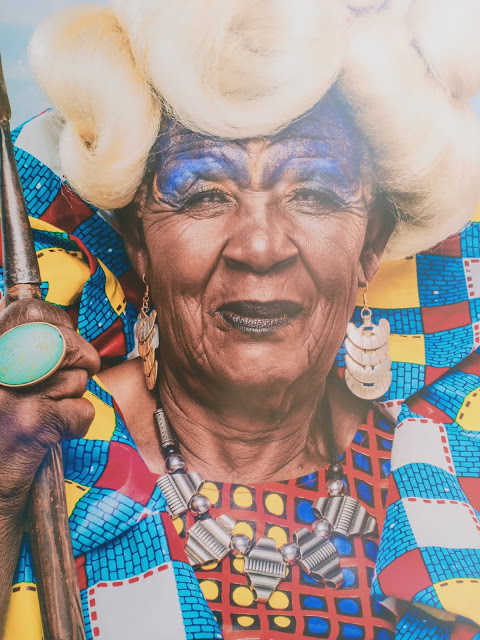 Osborne Macharia and Kevo Abbra are surrealist storytellers currently showing off ‘7 Years of Afro-Futurism’ at Alliance Francaise.
They are also magical mixed media men. One’s a photographer, the other a fashion designer and together they create captivating images complete with caption-like stories that feel like they’re fresh out of somebody’s hallucinogenic dream. 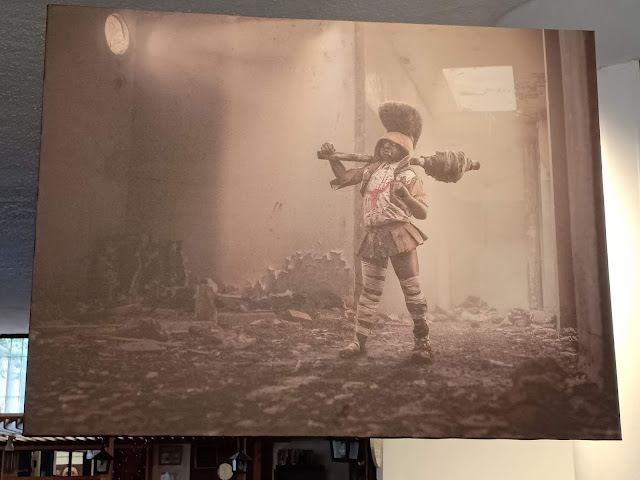 Presented as if the images are anthropological finds, the seven sets of photographs are described as if they are ‘discoveries’ made by the two as they traveled to obscure corners and enclaves of Nairobi.
These never-before-seen clubs, clans and ‘special units’ are all said to be “little known…till now.” That line, found at the bottom of all seven captions apparently translates to mean they all came out of the fertile imaginations of Osborne’s and Kevo’s minds. 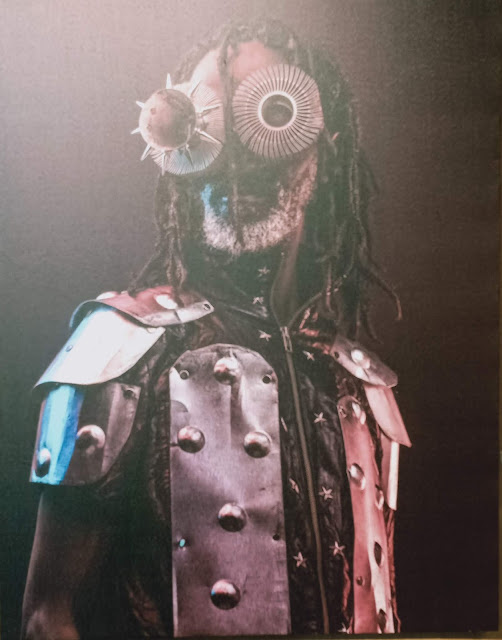 The show is puzzling at first. But once you realize these two are ‘merry pranksters’ having fun being as plausibly outrageous as possible, you have to marvel at their genius.
They seem to take as their baseline of believability, Nairobi’s popular urban culture, including everything from Marvel comics and ‘Black Panther’ references to mitumba and Mau Mau generals including Mau Mau wives. They tune in to youth fetishes for fashion, fancy hairdos and ‘found objects’ transformed into junk art.
But then they take off into uncharted territories of consciousness. They make their ‘discoveries’ everywhere from Kawangware and Kipipiri forest to Kibera, Lake Magadi and unknown sites beneath Nairobi’s CBD. 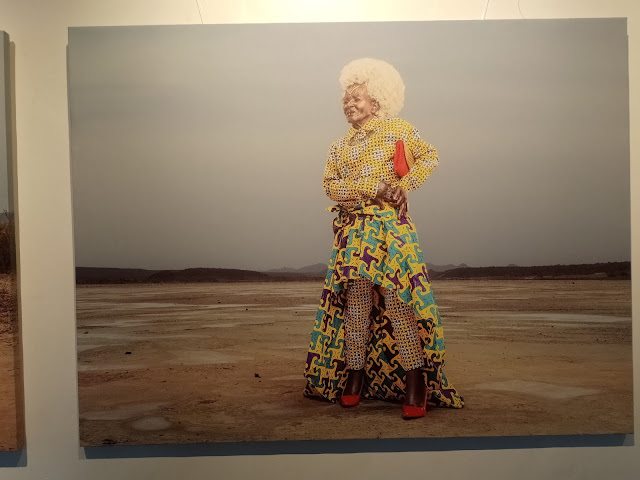 Only two sets of the seven feature women but their women are glorious creatures who you’d love to meet in real life. The four Kipipiri women are said to be a ‘special unit’ of Mau Mau Generals’ wives who, like their spouses are ‘leaders’ in their own right. Whenever there’s a full moon, they emerge with super high-styled hair do’s.
But it’s the Lake Magadi mamas who are even more intriguing. They are “former female circumcisers” who abandoned FGM to now design elegant ethnic fashions and mentor young women in both making and modelling those same fashion designs. Trained to be self-sufficient and able to succeed both locally and globally, the Magadi girls have mainly been ‘rescued’ by the mamas from child marriages. So while the mamas may be antiques, they’re providing an important services nonetheless. 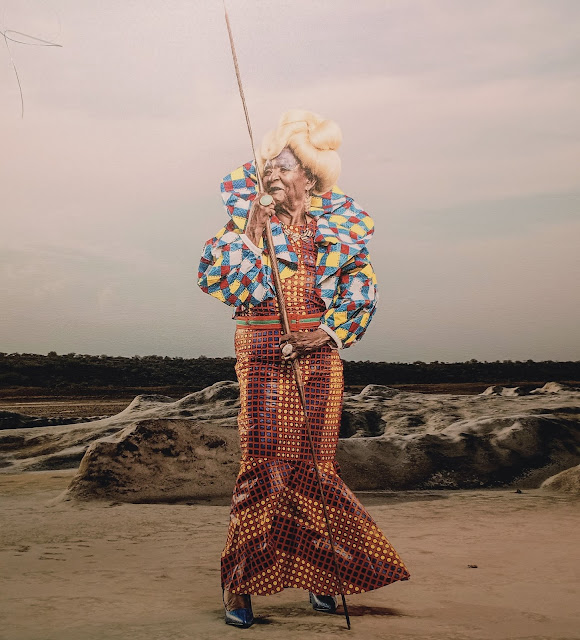 The men’s groups are mainly seers or defensive fighters. The ‘Kawangware Defense Force’ is made up of HIV/AIDS orphan boys who go to school by day and go on duty with KDF by night. Hooked up with discarded boda boda helmets and home-made electronic that can trace criminal prowlers, the KDF’s work is to detect and then relay ‘untraceable’ calls to alert the local police.
Another group of fighters were ‘found’ underground beneath the CBD. Osborne and Abbria only found five midgets who are members of the Nairobi Fight Club. Funded by local elites, they’re involved in intensive training. But the ‘researchers’ didn’t identify what they were being trained to fight for. Could that suggest there will be another installment of their Afro-Futurist ‘documentation’? 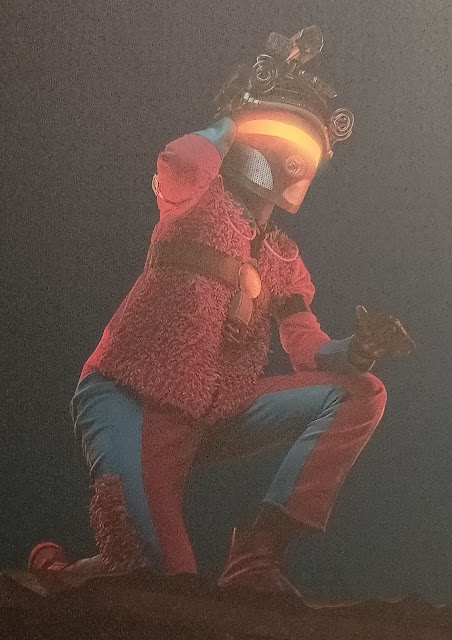 There are two groups of seers. One is the Ilgelunot, blind Maasai elders who were rescued by Wakanda’s King T’Chaka after which they became his trusted advisors with extraordinary powers acquired from exposure to the mysterious metal, Vibranium.
The other group belongs to a secret unit of Mau Mau fighter who also have special powers. Called ‘Macicio’, they are five opticians who create hand-crafted spectacles (similar to Cyrus Kabiru’s C-Stunners) that allow them to have night vision. Their specs enabled the Mau Mau to spot their enemies throughout the night.
Finally, ‘Remember the Rude Boy’ is meant to be a tribute to Kevo Abbra’s father who is said to have been a tailor based in the ‘ghetto’. His tailoring friends created an eclectic fashion collection made out of up-cycled mitumba (second-hand clothes). The collection was staged as a fashion show in tribute to the elder Abbra. The first show is said to have been in Kibera but it’s set to travel all over Nairobi and then ‘across Africa’. 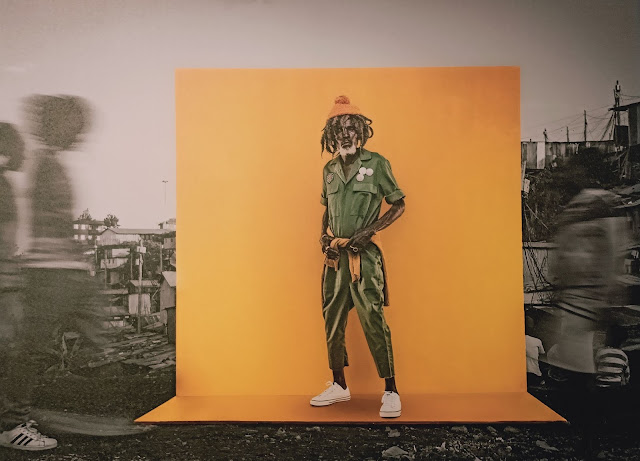 There’s enough fantasy in this Afro-Futurist showcase to assume that all seven stories are pure fiction. Nonetheless, there are many relevant themes sprinkled throughout this remarkable exhibit to make one admire the blurred lines between fantasy and reality.
What’s more, a record-breaking film like ‘Black Panther’ proved that the whole world, not only Kenyans, have a thirst for flights of fantasy that are conceivably true. So why not go for an improbable flight with Osborne and Abbra and delight in their fabulous ‘discoveries’. 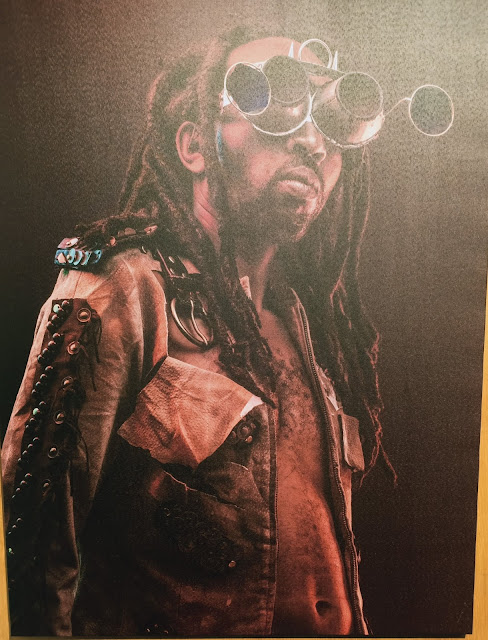 Posted by Margaretta wa Gacheru at 06:28