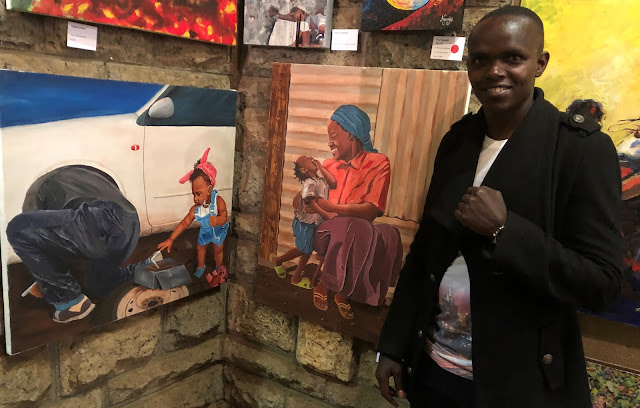 This year’s Kenya Museum Society’s Affordable Art Show was actually bigger and better than ever before.
That might sound hyperbolic but it’s true that in the seven years the show has been running, it has become the ‘biggest art show in East Africa’.
The 2019 edition of the exhibition has broken its own record by displaying more than 430 artworks, (mainly paintings but also sculptures and photography) in Nairobi National Museum’s open-air Courtyard over the weekend.
Even the audience attendance on opening night last Friday was unprecedented. Well over 450 art-lovers attended. 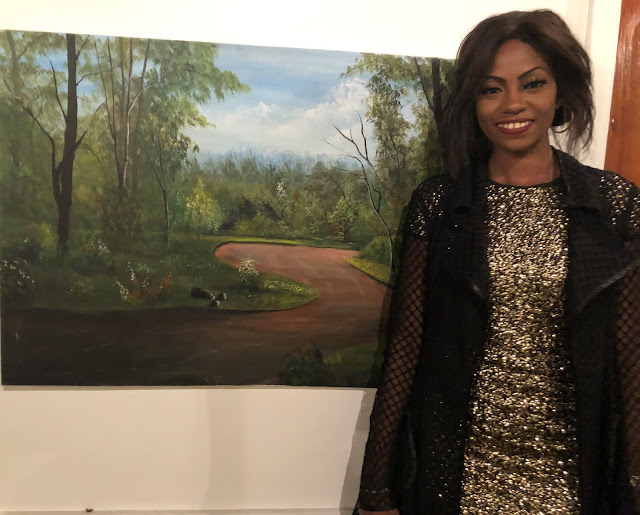 “What I was happy to see,” said Bonnie Donahue, a KMS Council member, “was so many young Kenyans attending the show this year.”
What was also satisfying for the Art Show Coordinator who’s also KMS’s Honorary Secretary, Dr Marla Stone, was the fact that more Sh2.6 million-worth of artworks were sold on opening night. “That is when most of the sales are made,” she said, noting that revenues raised from the Show go towards funding of various Museum infrastructure and exhibition projects proposed by Museum departments themselves.
“The artists retain around 70 percent of the sales,” said Saryoo Shah, another one of the KMS Council members who helped place the red ‘sold’ dots on over 90 artworks on opening night. 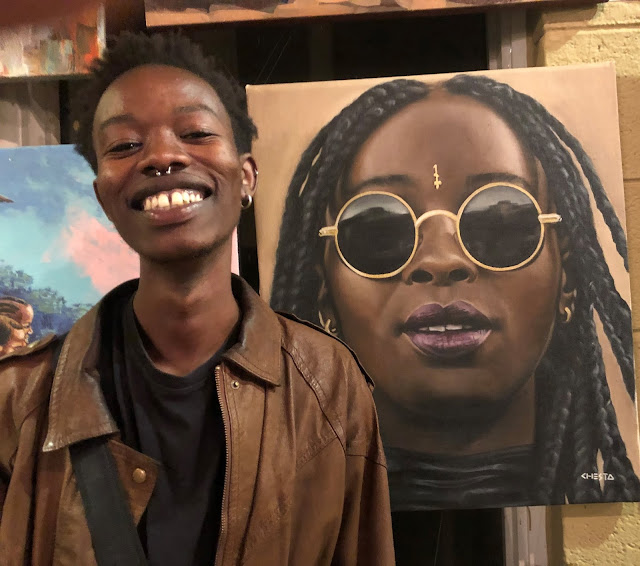 “We artists appreciate the Affordable Art Show a lot since most of us are able to sell something during the event,” said Dickson Nedia who sold both paintings he had brought to the three-day exhibition.
“We also like it because we are paid promptly, within two weeks after the Show ends,” added the award-winning artist who won first prize several years ago at the annual Manjano (formerly Nairobi Provincial) Art Exhibition.
What that appreciation meant was that around 600 artists didn’t mind standing in a long line on October 16th until they got their turn presenting their art to the Show’s curators who included Wendy Karmali, Lydia Galavu and Dr. Stone.
“We took in 900 works of art that day,” Dr Stone recalled. “300 were readily eliminated, but it took some time to select the 434 pieces [representing works of 275 Kenyan and Kenya-resident artists] that we presented at the Show,” she added.
That same ritual has gone on for many more than seven years since the 1990’s witnessed another version of the Affordable Art Show in which KMS got annual sponsors like the ABN-Ambo Bank which no longer operates in Kenya. There were several years when the show was in hiatus after the bank left. But when the Show got re-activated in 2013, many artists were elated. Sponsors like Total Kenya PLC, NCBA Bank and others have also come on board in support of the KMS arts initiative. 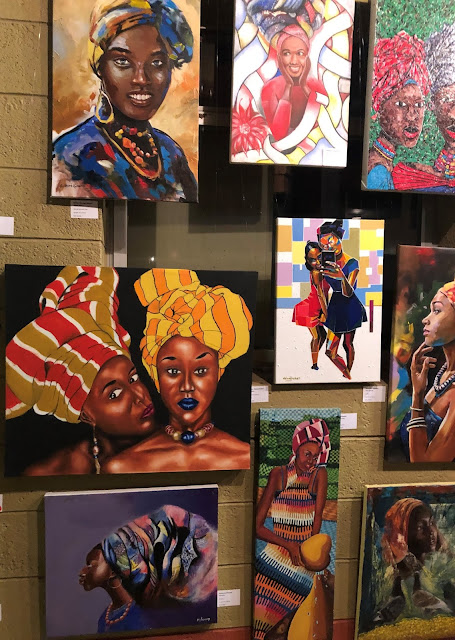 Nonetheless, since KMS has an intractable rule that no artwork can be sold for more than Sh100,000, quite a few established artists stay away since they expect to sell their art for more than that. Fortunately, that is not the case for other well-known artists like Elkana Ong’esa, Geraldine Robarts, Zacharia Mbutha and Alex Wainaina.
Nor did the rule keep away Ugandans like Anwar Sadat and Ronnie Tindi, Tanzanians like Haji Chilonga and Happy Roberts, South Sudanese painters like Deng Choi, El Tayeb Dawelbait and Yassir Ali or even the Kenya-based Nigerian painter Akinyemi Ajibade.
What was also exciting to see was how many new artists came out this year after being mentored by more experienced Kenyans. For instance, several students of Joan Otieno’s Warembo Wasanii exhibited as did some from Adam Masava’s Mukuru Art Club and two from Esther Makuhi’s classes at Darubini and Green Yard Junior School, Ngong. What’s more, the number of former Patrick Mukabi students is uncountable since he’s been filling in the gap left when Kenya’s National Curriculum cancelled art as an examinable subject some years back. 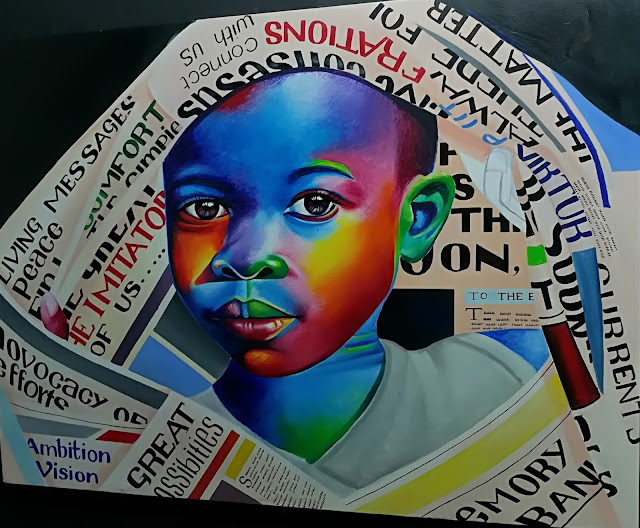 There were a fair number of women participating this year, including artists like Beth Kimwele, Naitiemu Nyanjom, Nikita Fazel, Rose Ohono and Rose Kanini. But the numbers were less than 20 (out of 275) which barely reflects the activism of women artists working in Kenya currently.
For example, Sebawali Sio and Moira Bushkimani are exhibiting with other Brush tu Studio artists at One Off Gallery’s Rosslyn Riviera annex. Florence Wangui, Irene Wanjiru and Naomi van Rampelberg are part of another One Off show in the Stables’ side of the Gallery. And the wonderful watercolors and prints of Mercy Kagia are featured since last Saturday in a solo show at One Off’s Loft. 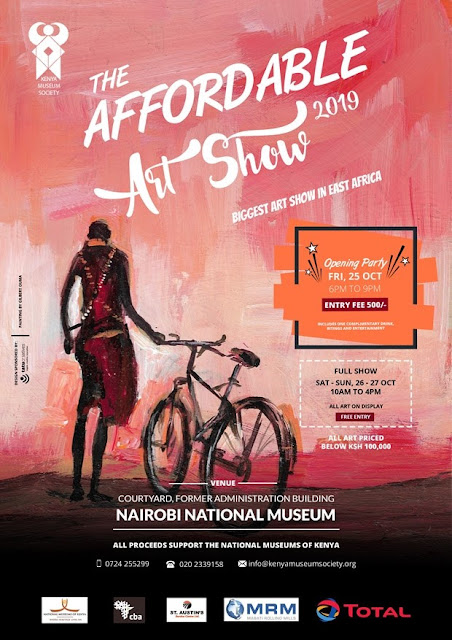 Posted by Margaretta wa Gacheru at 04:05