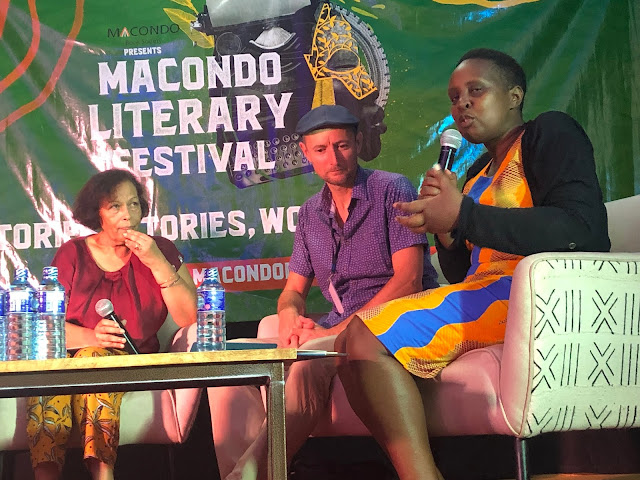 By Margaretta wa Gacheru (posted 2 October 2019 for The EA)

Published writers from all over Africa converged on Nairobi this past weekend to take part in one of two Pan-African literary activities.
They came from Cameroon, Mauritius, Nigeria, Canada and Kenya to attend the Second African Writers Conference. They also arrived from Angola, Mozambique, Cape Verde, Guinea Bissau, Zimbabwe, South Africa and even Portugal to attend the Macondo Literary Festival, both of which were held from September 25th to the 27th.

Coincidentally both were happening right when the 22nd Nairobi International Book Fair was taking place at the newly-renovated Sarit Conventional Centre.
Conveniently, Sarit Centre was also where the African Writers Conference was happening, organized by the Writers Guild Kenya and African Writers Development Trust (AWDT).
Meanwhile, the Macondo Festival was going on simultaneously at Kenya Cultural Centre, organized by the Macondo Book Society and named after the magical place in the novel by Columbian Nobel laureate Gabriel Garcia Marquez, ‘One Hundred Years of Solitude’. 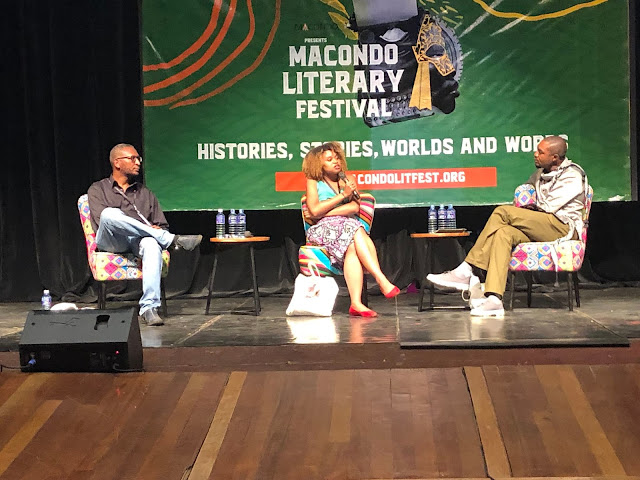 Both literary events had similar themes. The conference explored ‘Cultural Stereotypes in African Literature [in order to] ‘Re-write the Narrative for the 21st century Reader.’
The Festival, on the other hand, aimed at ‘Re-imagining Africa’s Histories and Stories through Literature.’ In both instances, the chief concern seemed to be re-interpreting the African narrative and re-writing it so as to reflect the realities of the region in the 21st century from an African point of view.
But both sets of organizers also have long-term objectives. The chief conference organizer, Nigerian Anthony Onugba, who also heads AWDT, ultimately aims to create a single broad-based organization ‘to empower [all] writers of African descent’. The Macondo Book Society also aims to organize more literary festivals but as a means of breaking down linguistic and cultural barriers among African writers and making African literature more accessible to the wider public. 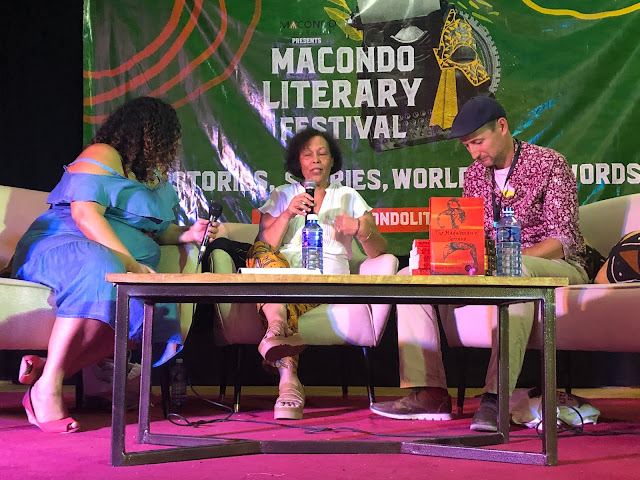 Towards their respective goals, the Conference had organized literary competitions, the awards for which were announced mid-way through the weekend. With the judges coming from Mauritius, Zambia and Nigeria, the awards were for African poetry, short stories, children’s literature and ‘flash fiction.’ No Kenyan won in these categories, but special awards were given to Kenyans for their contributions to the development of literary ‘space’ in Africa. They included Dr. Tom Odhiambo, Jackson Biko (blogger), Khainga O’Okwemba (Literary enthusiast and broadcast journalist) and AMKA, the group focused on developing women writers. 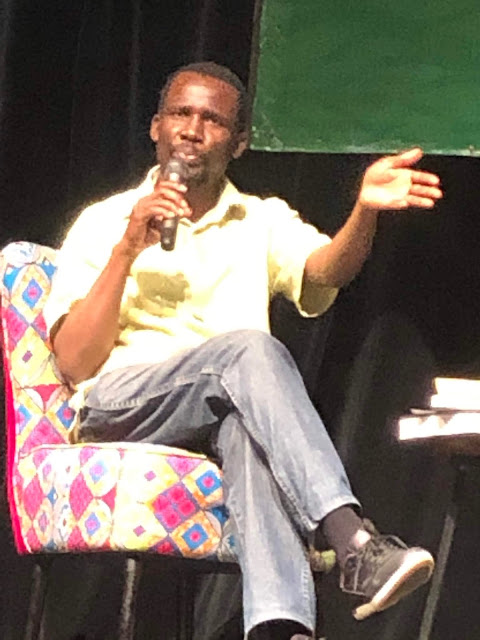 The Macondo Festival had no official awards, just amazing opportunities to listen to and interact with writers who had come from all over Lusaphone (Portuguese-speaking) Africa. There were also filmmakers, musicians, storytellers and translators who actively participating in the jam-packed schedule of panels, workshops, round-tables and book launches.
Organized by the award-winning Kenyan writer Yvonne Adhiambo Owuor and German journalist Anja Bengelstorff, the Festival went like clock-work which was no small feat. But as the program of events had been specifically set out online and in hardback copies, everyone attending seemed eager to be on time to listen to the published authors whose books were for sale right outside the National Theatre, courtesy of Prestige Books which ran a ‘booming business’ over the weekend. 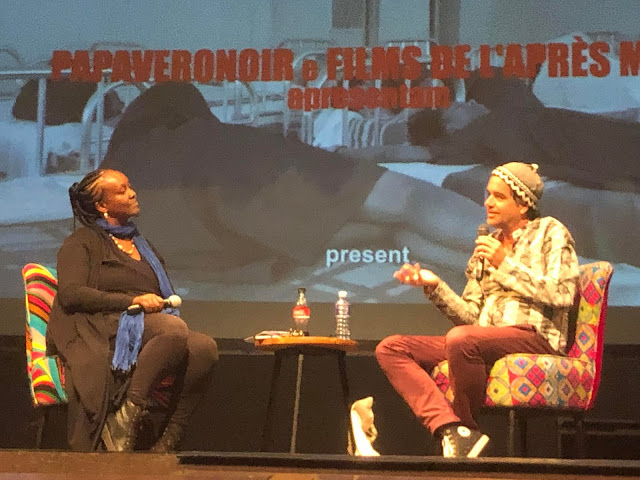 The impossibility of attending all the workshops and discussions was the only disappointing factor of the festival whose preoccupation with history and ‘whose history?’ aroused lively debate at every session. The point was consistently raised that the dominant history (or narrative) of Africa was still filled with stereotypes shaped by colonial historians who had written from their own vantage point.
So just as the key concern raised at the African Writers Conference had been debunking stereotypes, the Festival focused a similar issue. However, it paid more attention to African writers, like Kenya’s award-winning writer Dr Peter Kimani, who is already ‘re-imagining’ African history. Kimani’s historical novel, ‘Dance of the Jacaranda’ challenges the colonial narrative of Kenyan history, replacing it with a story that shines a spotlight on Africans’ perspective on Kenya’s war of Independence and the 19th century ‘scramble’ among the colonizers to grab the fertile land of Africa. 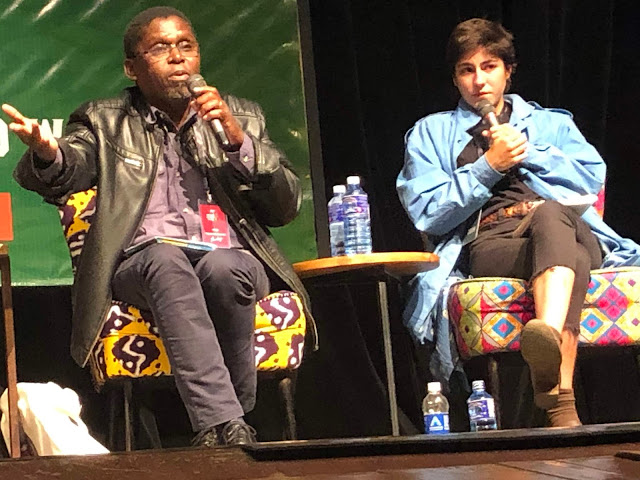 In all, last weekend’s literary weekend was one that compelled us to appreciate how rapidly the arena of African writers is expanding and enriching people’s understanding of how 21st century Africans think, write and create. 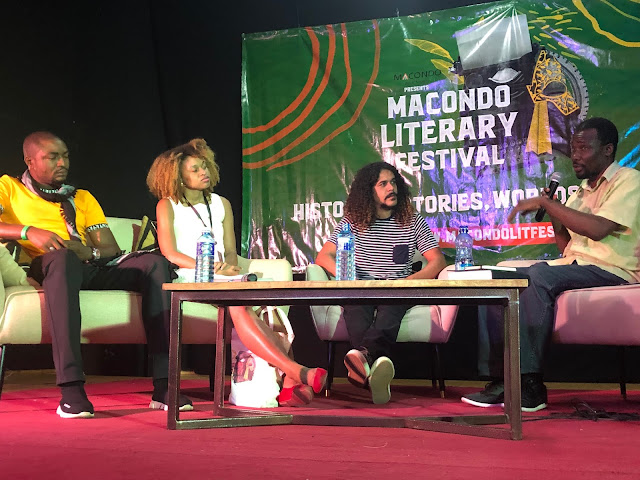 Posted by Margaretta wa Gacheru at 09:08