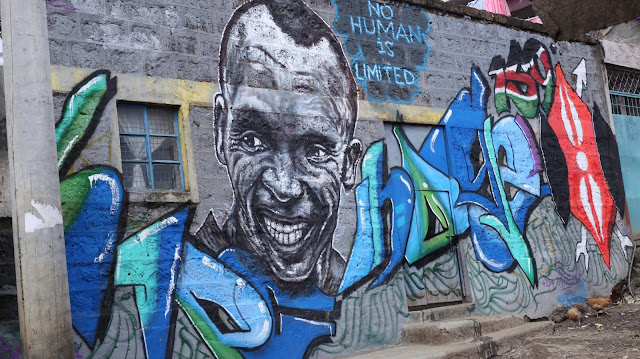 Eliud Kipchoge inspired an entire nation as well as the rest of the world when he broke the world record, running 26.2-miles in Vienna, Austria, in less than two hours or 1.59.40.2 minutes.
The epic run of a man renowned for being ‘the world’s finest marathoner’ will go down in history. One place it will be especially remembered is the Eastlands suburb of Gomongo.
That’s the spot where two Graffiti artists found a brick wall that wasn’t cluttered with political posters or painted adverts for this and that. It is right nearby the home of Tony Blair Eshikumo aka Daddo, one of the two Railway Museum-based artists who took on the task of immortalizing Kipchoge in Eastlands with their graffiti art. 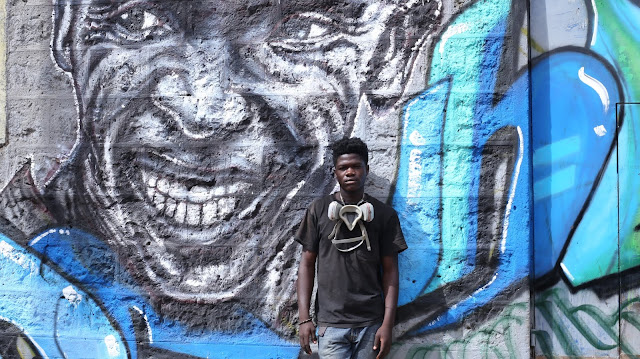 The other graffiti expert is Brian Masasia aka Msala, one of trio of so-called ‘second-generation’ graffiti artists known as BSQ. That’s an acronym short for ‘Bomb Squad’ because they used to ‘invade’ sundry spaces where they would create their graffiti art.
That is no longer necessary since they booked a whole railway car behind the Railway Museum where they set up their artists’ studio.
Also at Railway Museum is Patrick Mukabi’s Dust Depo Studio where Msale met up with Kaymist and Bebuto Thufu, and eventually formed BSQ. But all three artists have independent lives, which is how Msale linked up with the younger graffiti artist Daddo who had scouted out the space in Gomongo and invited his elder to join him.
“BSQ are who I’d call Nairobi’s second generation graffiti artists,” says Daddo who completed the Kipchoge mural less than a week after his historical run.
“The first generation are artists like Bankslave, Swift, Smoki, and Uhuru B who call themselves ‘Spray Uzi,” he adds. “I’m one of the third generation along with artists like Mutua and Ebrah. And now there’s a fourth generation coming up,” says Daddo pointing to the Railway Museum’s long brick wall where a number of young artists are arriving to participate in BSQ’s ‘Rangi za East’ which started October 30th and runs through November 3rd. 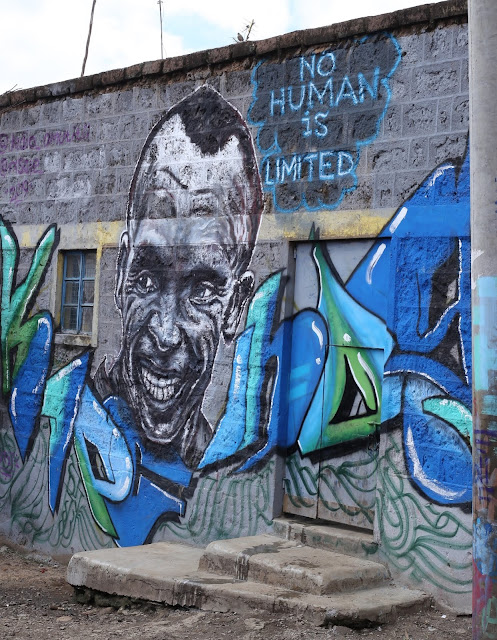 Daddo is also taking part in Rangi za East, having reserved one brick panel to create his own original graffiti design. He says BSQ organized the event especially so that the next generation of graffiti artists would have a chance to learn from their elders.
“That is how I learned,” he says. “I had always loved to draw, but it wasn’t until I met Smoki who advised me to go to PAWA254 where I would meet the pioneers in graffiti art. That was in 2017,” he adds.
But despite his considering himself a relative newcomer to the art form, Daddo actually just won a top prize at the recent ‘Graffiti Jam’ at Capital Centre where Bankslave was one of the judges. What’s more, his Kipchoge mural at Gomongo is what he calls ‘panoramic’ being 8.5 metres across and 5 metres high.
Daddo says that just as he and Msale were inspired by Kipchoge’s example, they also hope to inspire young kids in that neighborhood who may have never seen art before but now might want to try their hand at it themselves.
For ever since art was eliminated from the national syllabus as an examinable subject, Kenyan youth have little exposure to the arts. That’s why artists like Daddo, BSQ and Spray Uzi all feel they have a role to play in showing Kenyan youth the value of creativity and art.
“Many young people are inspired by what we do,” says Daddo who at 22, is thrilled to join the ranks of young graffiti artists.

Posted by Margaretta wa Gacheru at 05:16