PLAYS REFLECT ON CORRUPTION, BOTH PERSONAL AND POLITICAL 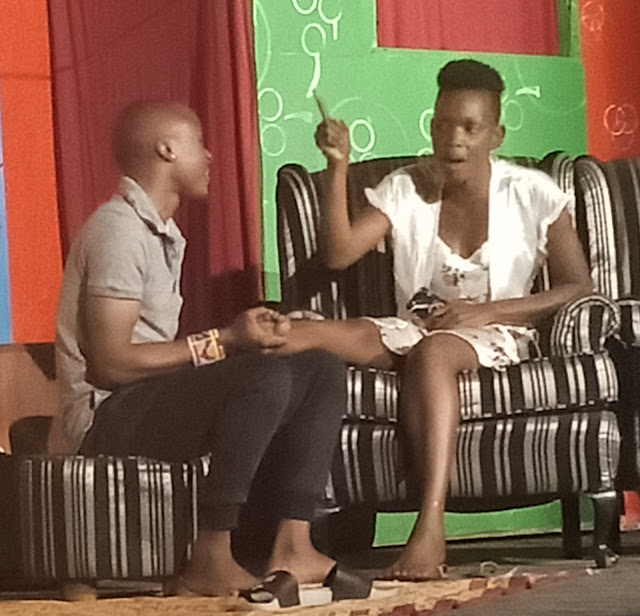 It’s fascinating that while the two plays staged last weekend, namely ‘Cat and Mouse’ and ‘All I ever wanted’ are very different scripts, they ironically have much in common. Both performed to packed-houses, Heartstrings’ ‘CaM’ at Nairobi Cinema, Hearts of Art’s ‘AIEW’ at Braeburn Theatre.
Both have at their emotional core a teenage girl sent home from school, not because she’s a bad student. Her perceived misconduct is the consequence of family pressures resulting from differences between her parents.
In ‘Cat and Mouse’, the parents have split and she (Bernice Nthenya) is left with her wayward mom (Mackrine Andala). Other issues are raised, including a horrible education system that leaves not only students in the dust but teachers ignorant of the ever-changing curriculum so they con their kids as a consequence. 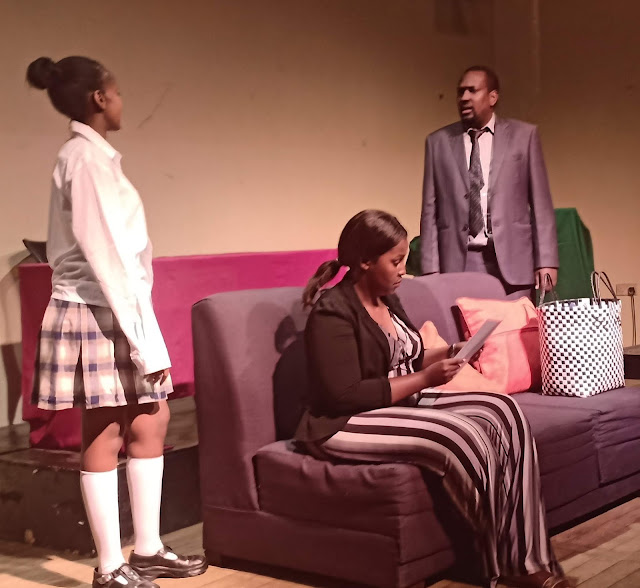 Heartstrings has little sympathy for teachers whom they showcase as either buffoons, tricksters, tyrants or all three. It’s the bursar (Jerry Mokua) who is the most brutal towards children, especially towards our girl whose mom’s neglect is manifest in her failing to pay school fees. That is why the girl gets sent home.
In Hearts of Art, the young girl, Tricia (Suzzie Joanitah) also has grievances with parents who don’t get along. In both plays, the parental issue relates (as usual) to infidelity. In Heartstrings, it was the mom who got caught cheating by the dad (Sammy Mwangi).
In ‘All I ever wanted’, the philanderer is Judge Harvey (Sam Psenjin) who’s had an affair with one of the advocates, Laura (Ellsey Okatch) whose cases often end up in his court. After his wife (Grace Waihuini) finds out, he tries to make amends for the sake of his kids, but the wife doesn’t let him forget.
Their arguments disturb the girl terribly, leading her to send her dad anonymous Biblical text messages castigating him for his sin of infidelity. He believes they are sent by the wife, so before he learns the truth, he says he’s given up trying to make their marriage work.
When he makes one last half-hearted effort to return home, he finds they are all gone and he’s alone. Except for Laura who’s been waiting in the wings to snatch the man for herself.
Ultimately, the judge supposedly maintains his integrity rather than compromise it when threatened by the Mafia-like Special Agent (Ramsay Njire). But he apparently caves in when it comes to his personal life.
Fortunately, Tricia makes amends with her mom which somehow fulfills the sentiment expressed in the show’s title, ‘All I ever wanted’. It was a parent’s love.
Heartstrings’ girl also gets that parental love, although hers comes from her dad, as she announces over social media, one of the sub-themes of both plays. For in addition to the theme of bad parenting causing countless social problems, both scripts highlight the all-pervasive and obsessive nature of social media, digital technology, and how they damage human relationships which have largely been replaced by the cell phone.
The best evidence of the damage social media can do comes in Walter Sitati’s script where a young woman (Ann Wanjiku) is charged with killing her mom. She had been lost in her cell phone, so when it died, she mindlessly unplugged her mom’s life-support system in order to recharge her phone. She apparently had no malice, only ignorance of the consequences of her actions. The Judge finds her guilty as charged; not even her clever advocate (Sitati) can save her from a 15-year jail sentence without a cell phone. The jail term being less of a torture to her than life without her precious smart phone.
The case of the heart-broken lover (Allan Sifuna) who takes his ex-lover (Azziad Nasenya) to court gets resolved once she remembers his sweetness and readily dumps her social media-obsessed boyfriend (Rextone Saul), Judge Harvey’s son on the spot.
But the most political case facing the Judge, and the one that gets the local Mafia after him, is that of the dissident woman (Traci Amadi) who has good reasons for not paying her taxes and refusing to take part in the census count and registering for Huduma Namba since they are all related to a corrupt political system that gives politicians free reign to exploit ordinary people rather than serve them like good public servant should do.
In end both plays leave us disillusioned but sadly more aware of how far some Kenyans have gotten off the track of caring for others and instead, serving themselves.


Posted by Margaretta wa Gacheru at 05:49