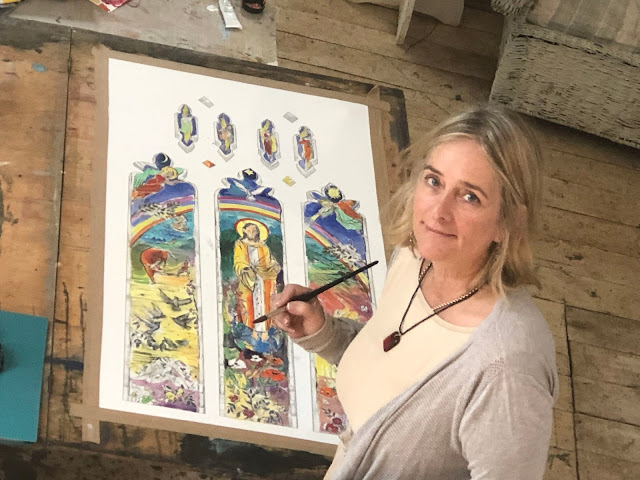 For centuries, the Catholic Church has been a great patron of the arts, which is one reason Florence Wangui and John Kenneth Clark were commissioned to create beautiful stained-glass windows in the Sacred Heart Cathedral in Kericho in 2015.
But John doesn’t discriminate. So when he met the Kenya-based artist Sophie Walbeoffe who was planning to create stained glass windows in a Protestant church in South Devon in the UK, he was happy to come work with her.
“It’s been a wonderful collaboration,” says John who is the specialist in stained-glass while she is a superlative colorist whose paintings have been exhibited everywhere from London and Dubai to Jerusalem and Nairobi.
“We’ve worked together on the drawings for the windows,” says Sophie who was in the process of tracing their original (charcoal) drawings onto special tracing paper that John was getting set to take back to his studio in Germany where he would make the actual glass pieces, after which he and Sophie would install them in the Saint Nectan Parish Church in Ashcombe, Devon.
(His other studio is at Karen Village where he has imported a large glass-fusing kiln for use in two glass projects he started with Kenyan artists, one called Encompass art, the other Nakshi glass.) 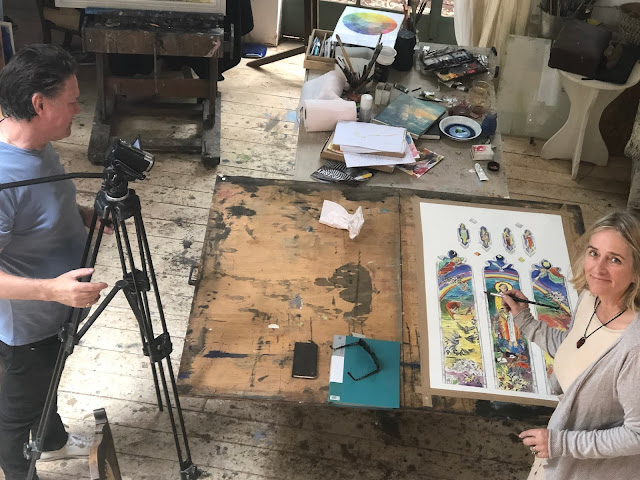 John will also take along a miniature replica of their original design, which like the windows is three meters tall and one and a half meters wide.  The ‘miniature’ is actually a small-scale duplicate of the drawn design but painted by Sophie with all the vibrant colors that she wants in the three-panel window that she is dedicating to her grandmother Lady Elizabeth Rayner.
Sophie knew her grandmother well since she grew up in Devon and lived near Lady Elizabeth whose village, Ashcombe is where the church was built in the 13th century.
“Last year I remembered my grandmother had left a stipulation in her will that a lump sum be set aside for either a church carpark or a stained glass window,” says Sophie who was trained as a painter at the Wimbledon School of Art in London, but started working in glass with Nani Croze of Kitengela Glass Trust several years ago.
It was serendipitous that she met John Clark sometime back in Tigoni when she was painting in the open air with another Kenyan artist, Mary Collis. “I’d been told another artist was working nearby so I went over to say hello,” Sophie recalls.
They have been friends ever since and began collaborating on the windows over a year ago. Explaining that there are several narratives in the windows’ design, Sophie points to Jesus Christ who is illustrating the Parable of the Sower as seeds drop from his hand as he stands on a globe. “That’s to say we must take care of our planet,” she says.
Then she points to the seed which lands on fallow ground, among thorns and thistles and finally, on good soil that bears a beautiful floral harvest. But then in the upper part of the design, there’s another narrative, of the village founder after whom the church at Ashcombe was named, Saint Nectan.
“Nectan is said to have come over to Devon from Wales by coracle and established the village,” she says pointing to Nectan and his circular sailboat in the upper left lancet (or panel). Sadly, she adds his life ended tragically.
“As the story goes, he was attacked by thieves and beheaded. But it is said that wherever his blood fell, foxgloves [flowers] grow. These are also in the windows,” she adds. So are the hills and rocky ridges of Devon that overlook the sea.
There are other elegant details in Sophie’s design, such as the rainbow above Jesus’s head, which she says was inspired by the British artist Winifred Nicholson who loved radiant rainbow colors as much as Sophie does.
The one feature of the windows that gives them a personal touch will be found in the four oval windows above the larger body of the stained glass. Sophie describes them initially as ‘musical windows’ since each one contains a musical instrument. Explaining further, she adds that the windows represent the four sisters in her family. There’s Sabrina on flute, Julia on trumpet, Sophie on cello and Emma on banjo.
And above them is the fleur de lis, which she says is nod to her grandmother’s French Huguenot background.
“Best of all,” adds Sophie, “is that in addition to the windows, the church is getting a carpark.”


Posted by Margaretta wa Gacheru at 11:10