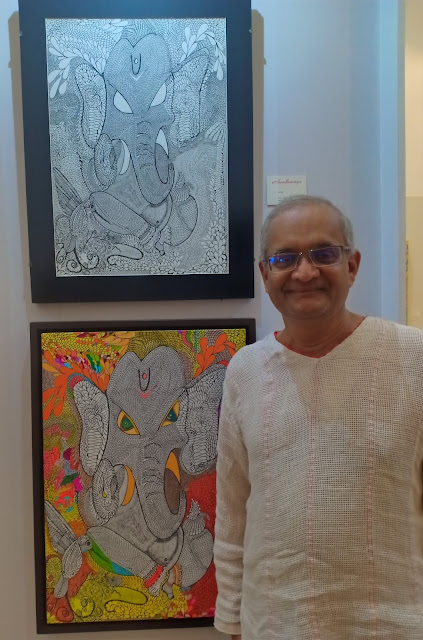 Ashwin Patel is what you’d call a ‘late bloomer’, someone who discovered his calling after fulfilling his first life-time career.
“I’ve been forty years in paper manufacturing,” says the grandfather who only realized he had real talent as an artist after giving his grandchild a birthday card. “I hadn’t wanted to give her something ordinary so I embellished the card with my doodles,” he adds.
Drawing with just a gel pen, Ashwin still prefers that kind of pen. “I have boxes of them,” he says during the last day of his first solo art exhibition at Village Market.
“It was my family who insisted I had talent,” says the CEO of Paper Converters Ltd. “My daughter Phera even curated this exhibition,” he explains, noting he had 60 paintings and drawings in the show he aptly entitled ‘Awakenings’. 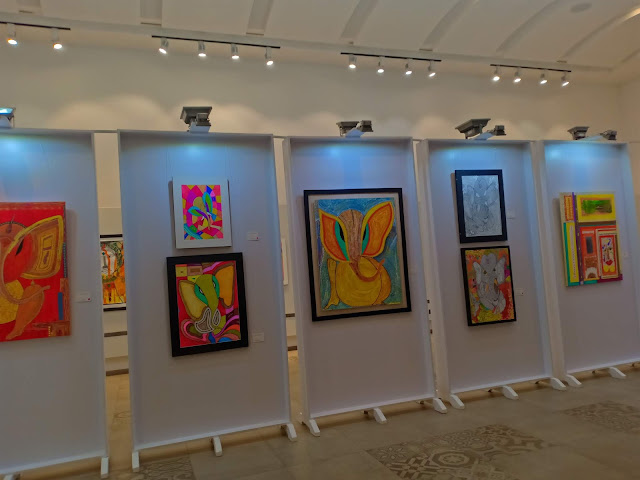 One way he was able to include such a variety of artworks in his premiere exhibition was by putting up a long row of panels which he and Phera lit with overhead lighting that was carefully focused on the painting beneath.
The lighting made all the difference to the success of his showcase since one could see how meticulously he both drew and painted his artworks.
“I’m fortunate in that when I draw, my hand is steady and doesn’t stray from the [alignment] I am trying to make,” he says, accurately expressing the fact that his lines are delicately drawn and aligned like the grain of ancient trees.
I jest that perhaps he learned that refined alignment from the bonsai trees that he keeps in his garden. It is visible in all of his drawings, be they filled with trees, leaves, flowers or human beings and be they semi-abstract or naturalistic.
What Ashwin does not hide is his affinity for Hinduism. It’s visible in his multiple drawings of elephants, reflecting his appreciation of Ganish, the elephant-headed son of Lord Shiva. 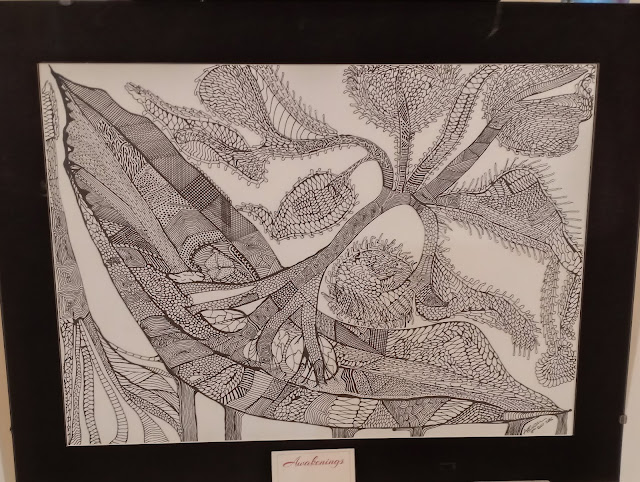 It’s also apparent in a sweet painting of a couple who he says represent Lord Krishna and his sweetheart Radha. “They never married but they’re a symbol of enduring love,” he adds.
What’s also noteworthy about the couple is that theirs is one painting that reveals Ashwin’s branching out to use, not just the gel pen, but also acrylic paints, colorful African fabrics, sand and glittery beads.
“My family sent me a whole box of ‘master markers’ to experiment with,” he says. This partly explains why so many of the works in his show are brightly colored in yellows, oranges, pinks and purples.
For me, his black and white drawings are the most effective works in ‘Awakenings’. But what his color pieces prove is that he’s artistically adroit whether using a pen, paint brush or even a sponge. 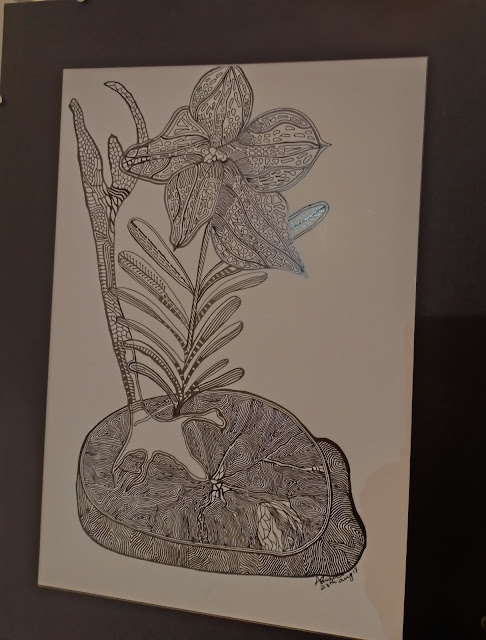 The contrast between the two styles-of black and white versus color-is best seen on one of the well-lit panels that has one drawing of Ganesh and the same one (which had been scanned and reprinted by Phera) which Ashwin painted with a rainbow array of colors. Initially, one might not notice that they were the same Ganesh. But then, on further scrutiny one can see the similarities as well as the differences between the two. My favorite would be the unfettered drawing which provided a clarity of feeling.
But then, the beauty of his first exhibition is that Ashwin is only embarking on a new career. And while his company is still producing all paper, he is sparing himself a bit more time to doodle, draw and experiment with color.
“I’ve even begun painting on photographs. They might be in my next exhibition.”

Posted by Margaretta wa Gacheru at 07:45