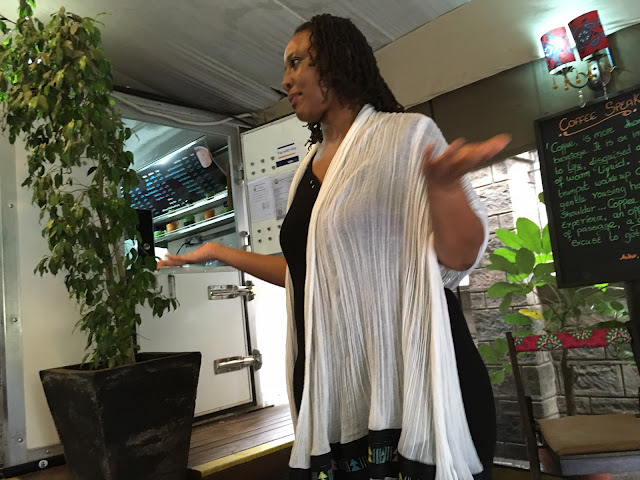 Book clubs are popping up all over Nairobi. But there is none quite like the Point Zero Book Café.
What makes the PZ Book Café so special is two things: first, it’s the coffee experience since conversations about books are situated specifically at Point Zero Coffee which is right in front of the Nairobi Gallery (the old PC’s office on the corner of Kenyatta Avenue and Uhuru Highway). 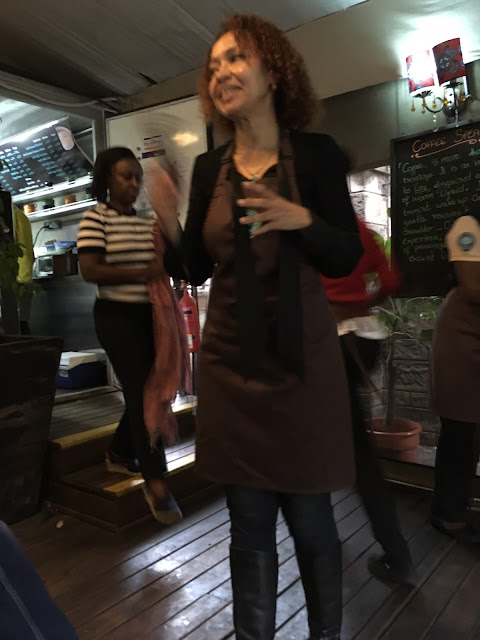 Andrea Moraa, (who co-owns PZC with Wangeci Gitobu) is the Coffee Master who introduces her audiences cum customers to new tastes in coffee (which is only half the reason people come mornings on the third Saturday of every month).
For instance, this past Saturday everyone present got to taste Blue Mountain coffee from Kenya and Columbian coffee from Latin America.
It turns out Andrea had done her ‘homework’ (testing with her experienced taste buds) to figure out which coffees go best with which cakes! What she’d discovered was that Blue Mountain goes well with ‘apple and butterscotch’ cake! And Columbian coffee partners well with banana cake.
Everyone on hand last Saturday morning got to taste her ‘discoveries’. But since nobody present had Andrea’s experience in professional coffee and cake tasting, all we knew was that everything was delicious.
But for those who’d come to Point Zero primarily to discuss this month’s book choice, it was the dramatization of Yaa Gyasi’s debut novel, Homegoing by The Performance Collective that was even more delectable. 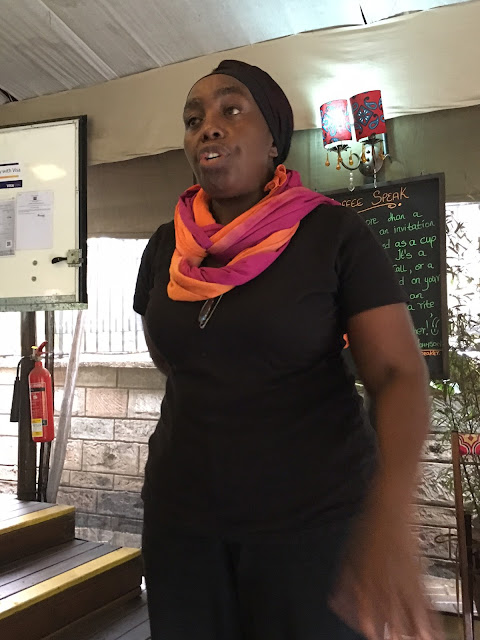 The theatrical trio of Mshai Mwangola-Githonga, Mueni Lundi and Aghan Odero is no ordinary acting troupe. They are all performing artists who have known each other for years. In their university days, they were all members of Theatre Workshop Productions. And while each has branched out into their own respective fields, they’ve stayed true to the tradition of storytelling which they mastered at Nairobi University.
It wasn’t long ago that they decided the time had finally come for them to reunite and become The Performance Collective. The Point Zero Book Café is the first time they have a regular monthly gig and goal, which is to introduce recent African writings to receptive audiences by dramatizing the texts.
“We also want to stimulate conversations about issues that arise from the texts,” says Mshai who actually started TPC with Mueni shortly after the 2013 elections.
“We began by doing non-fiction. We devised a performance that incorporated a number of actors and called it ‘Weaving Women,’ which was a fabulous experience,” Mshai recalls.
She and Mueni then went on to dramatize eye-witness testimonies from the ICC Witness Project which was also quite successful.
It was only last year that Aghan turned the duet into a trio and they started staging fictional works. Focusing first on Yvonne Adhiambo Owuor’s award-winning novel Dust, they blended Yvonne’s fiction with personal reflections on their friend and fellow creative.
“It was during that performance that we realized we needed to pay more attention to this project [TPC],” says Mshai who contacted the Point Zero Coffee women and shortly thereafter the PZ Book Café was born.
Thus far the Collective has dramatized readings from five novels. They include Dust, So Long a Letter, Ghana Must Go, Beloved and the book they introduced this past weekend, Homegoing by Yaa Gyasi.
Last Saturday, Mueni introduced the book by clarifying that their choice of passages was based on their desire to inspire people to read Homegoing thoroughly by next month (since every book gets two Saturday sessions). 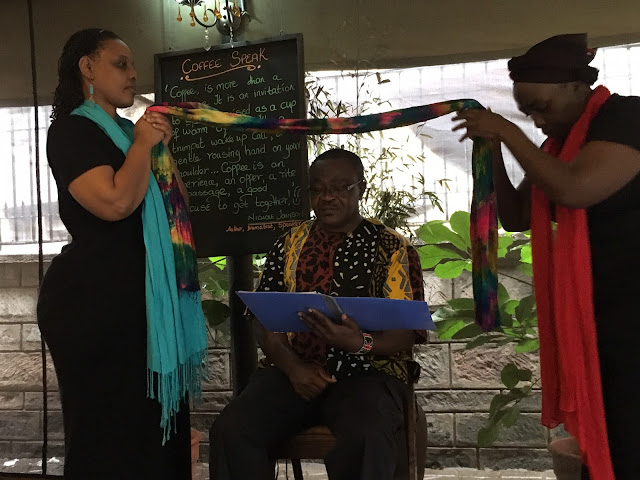 The trio definitely succeeded first by giving a bit of background into how the 26 year old author constructed her book, and then dramatizing the first two chapters enabling us to get a taste for the characters, the texture of the writing and the drama that would ensue. Later on, they dramatized ‘the family tree’ using colorful knotted scarves to symbolize the families’ connections over centuries.
Yaa’s historical novel is rich with complex relationships; it’s based on the lives of two sisters, one who grew up privileged having become the wife of a British colonial boss while the other was captured and destined to become a slave on a North American plantation.


Yaa has clearly written an ambitious historical novel. But it’s also one that The Performance Collective made magical and gripping. Their dramatization (and the lively discussion that followed) succeeded in inspiring their audience to go get the book and read it before November 18, which is the second session of the PZ Book Cafe.
Posted by Margaretta wa Gacheru at 02:41