A FARCE, A FABLE AND A FEROCIOUS ASSAULT ON MEDIOCRITY 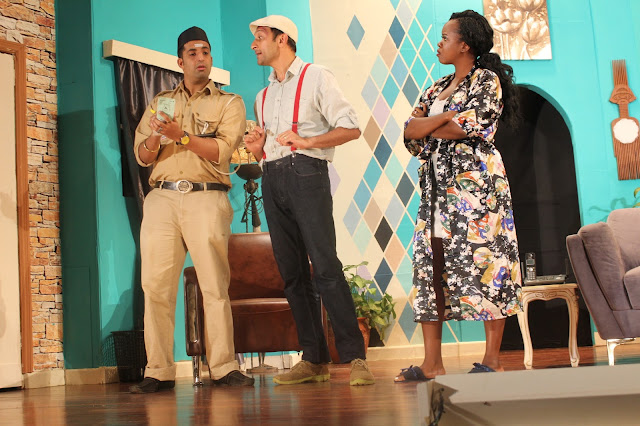 Replete with new theatre productions this past weekend, the variety of local shows is heartening. It’s especially gladdening in light of the ‘talent drain’ we’ve been watching as a number of excellent actors shift over into TV and film.
Of the three shows staged last weekend, all displayed a professionalism that was polished to near perfection. The lighting at PAWA254 where Hearts of Art staged ‘What Can’t Kill You’ needs serious adjustment. The bar scene in Heartstrings’ ‘Milk and Honey’ could also have been better lit. But the stage at Oshwal Junior Academy was a perfect setting for Aperture Africa’s comedy, ‘Run for your wife.’ 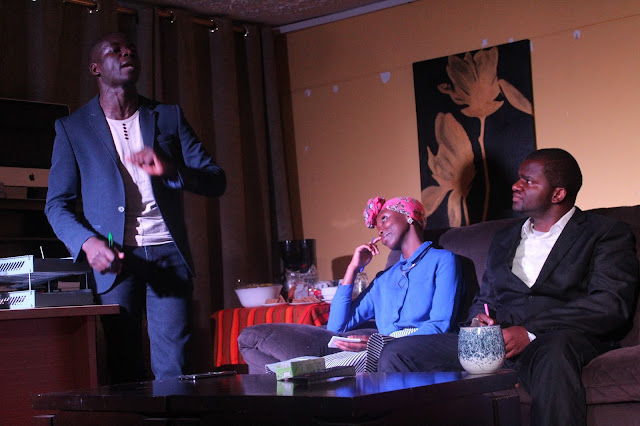 All three shows are blessed with seasoned directors who are seriously committed to putting up productions that are pleasing to their target audience. One staged a frothy farce, another a comedic fable and the third a satiric assault on everything from millennials to the media to permissive parents who indulge, rather than discipline their offspring, and the consequences of so doing.
It was Walter Sitati’s original script, ‘What Can’t Kill You’ that showed off the writer’s killer wit as he also took on the lead role of Zuberi, the managing editor of ‘Stinging Tongue’, a Daily Mail-type magazine. The paper is weighed down by the magazine owner, Yejide’s (Ellsey Okatch) inclination to hire family members who know nothing about the rigor of being a journalist. Her daughter, Boitumelo (Pauline Kyalo) is a spoilt brat and her son, Sika (Allan Shaker Wasike) is a useless but charming lay-about. 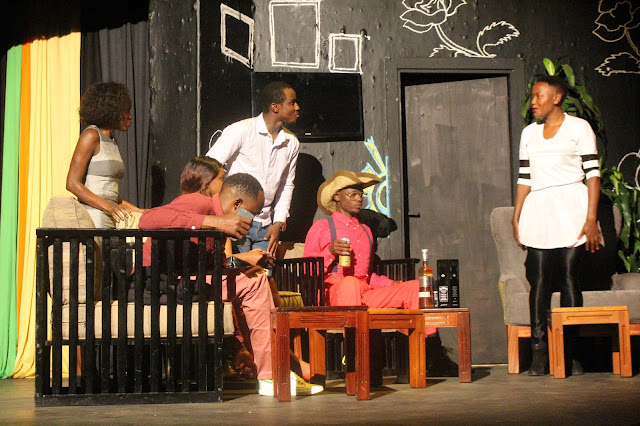 A scene from Heartstrings' Milk and Honey

The play does a time travel as we flash back to see little Boitumelo (Abigail Were) terrorize teachers and classmates alike even as she’s buttressed by a mom who believes her daughter can do no wrong. Flash forward and the same child, now grownup is just as thoughtless and bratty as before. Only now she’s one among many millennials who look just as deluded, shallow and falsely entitled as she and Sika are.
If there’s a pithy moral to Hearts of Art’s story (which returns to PAWA254 8-10 June by popular demand), there’s also one in Heartstrings’ ‘Milk and Honey’.
Victor Nyaata (as Gregory) is a naughty as ever, having become a debtor to neighbors, friends and even his wife Magdalene (Mackrine Andala). But it’s a mystery where all the cash has gone. Magdalene’s at her wit’s end, but she somehow discovers he’s got a gambling addiction. Plotting an ingenious scheme to bring him back to his senses, she enlists his bar-room buddy (Nick Kwach) in a rather far-fetched plan. Surprisingly, it works since Greg’s habitually gambled all the family funds away. But then, when he’s about to lose the one item in life that he loves, namely Magdalene, he struggles hard to win her back. 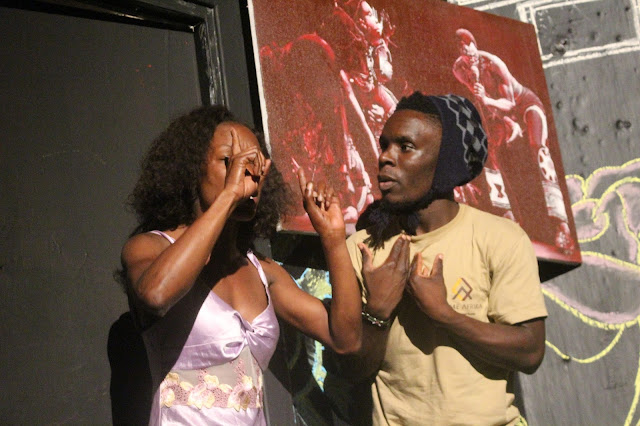 In both ‘Milk and Honey’ and ‘What Can’t Kill you’, there’s a moral to their stories that can’t be ignored even amidst the amusement of the moment.
It’s only Aperture Africa’s ‘Run for your wife’ that doesn’t pretend to have a deeper meaning. It’s just a jolly frolic about a taxi driver who perfectly times his life to have two wives in two separate homes, neither one of which knows about the other.
First staged in 1983 in New York and in London the following year, the Ray Cooney comedy was a smash hit in UK, more so than in the US where feminist critics and even legislators were opposing bigamy as well as polygamy. 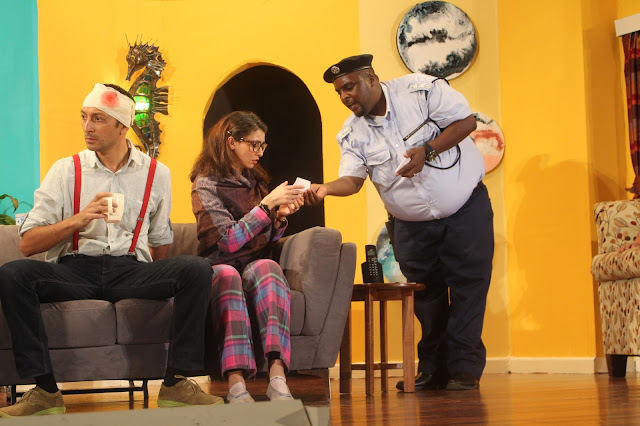 But if one ignores the sexist implications of the script and the fact that John Smith (Amar Desai, who’s also co-founder of Aperture) is living out a male fantasy, I now see that there’s actually a moral to this story too: it’s that crime doesn’t pay.
Being a bigamist, John is actually a cool-headed criminal who lies with smooth spontaneity to cover up his charade. The fun of the show is watching Amar (who’s directed, but hasn’t been cast in Aperture’s two previous shows), assisted by his friend Stanley (Hiren Vara), concoct all kinds of fabrications to avoid getting caught. 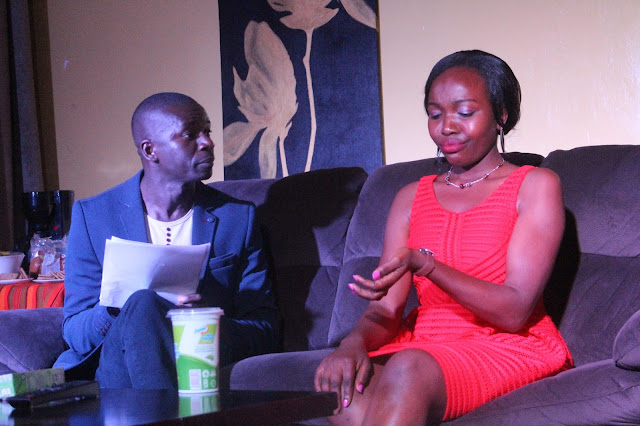 Walter Sitati, writer-director-editor in chief in What Cant Kill you with Pauline Kyalo as bratty Boitumelo

The two cops in “Run”, namely Bilal Wanjau and Vikash Pattni are hot on Smith’s trail. At first, they’re simply out to clarify the contradictions in his case. But ultimately, it’s Bilal who sees through Smith’s double life. In the meantime, Amar’s Smith is so charming we end up hoping against hope that he doesn’t get caught. 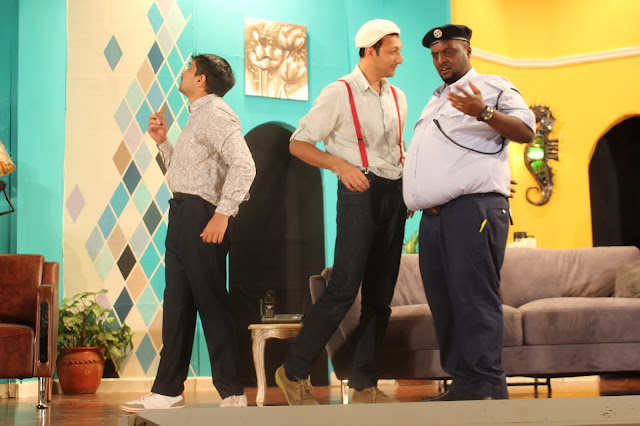 *’What Happens in the Night’ at Braeburn Theatre, 3pm Sunday 13 May.

Posted by Margaretta wa Gacheru at 04:25