DAVID THUKU: ARTIST ON THE MOVE AT RED HILL GALLERY 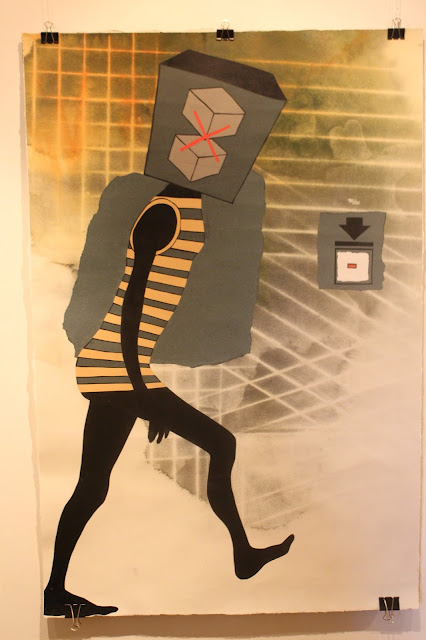 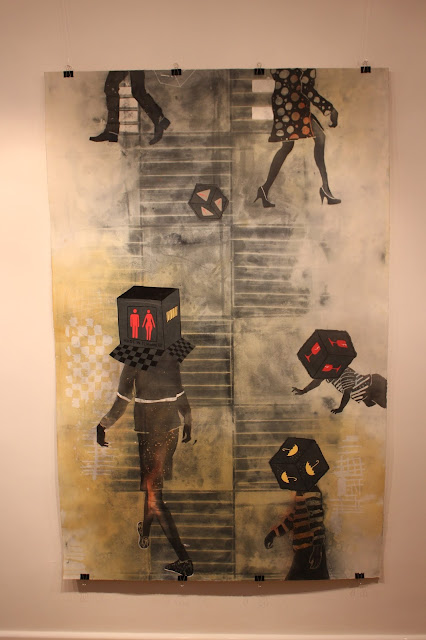 Consumerism isn’t a topic most Kenyans give a second thought. Yet that’s a bit ironic given we are first- class consumers, especially when it comes to shopping for items like cell phones which virtually everyone wants to own.


We consume second-hand clothes, flat-screen TVs and all kinds of gadgets. Yet most of us rarely think about how those items affect us or our psyche. How do they make us think about ourselves? Can any one of those items change the way we see ourselves and the world around us? 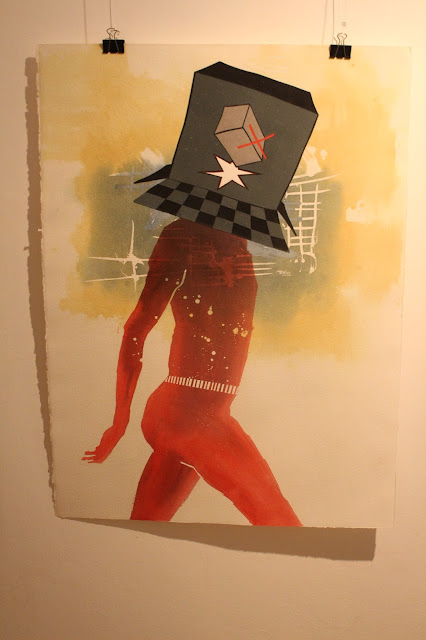 David Thuku seems to think they do. In fact, he’s created an entire exhibition exploring the notion that items which we buy (or acquire by some means) affect not just the way we think; they affect our whole identity.


‘Barcode – The Layer in Between’ is Thuku’s first one-man exhibition at Red Hill Gallery but it may not be his last, given the expansive turnout of Kenyan art lovers who came all the way to Limuru (almost) just to see his show.


One of Kenya’s most progressive artists, Thuku has been experimenting with art materials, forms, genres and concepts even before he went to Buru Buru Institute of Fine Art where he majored in painting. 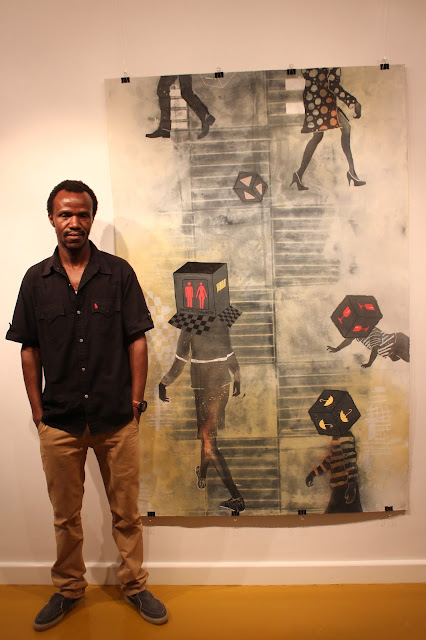 “In high school we were making murals together,” said Bernard Mugambi, one of Thuku’s longtime friends who came for the first time to Red Hill for the opening last Sunday afternoon.


Both Mugambi and Thuku went to BIFA, only his friend stuck with graphic design while Thuku took the leap and chose to risk everything by becoming a fine artist.


It was while painting backdrops for Drama Festival school productions that he began collaborating with Boniface Maina and Michael Musyoka, a friendship which led to their establishing Brush tu Art Artists Collective in 2013. 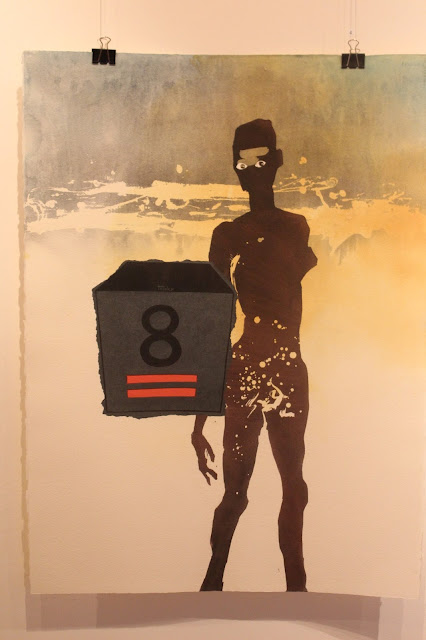 Since then, Brush tu has grown by leaps and bounds, and so has Thuku. He’s still an alumni of the collective, but he’s moved into solo studios, first at Kuona Artists Collective, now at Kobo Trust where he’s not only created artwork for Villa Nova Kempinski Hotel. He’s participated in exhibitions everywhere from New York and London to Paris.


Every step of the way, Thuku’s come up with new techniques, concepts and even genres. In the Kempinski, he created an intricate chandelier. At The Attic Art Space earlier this year, he created a series of prints portraying a man in dynamic motion, rather like the artist himself. 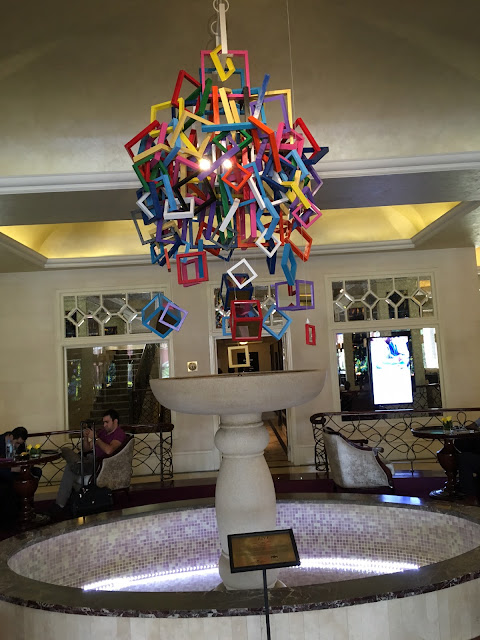 And in ‘Barcode – The Layer in Between’, he’s created graphic collages which are layered with color washes and rubbings and paper cut-outs shaped as human silhouettes and boxes representing sundry consumer items.


Almost half of the collages contain a box replacing a human head, as if to say the item has affected the consciousness and possibly even the identity of the consumer. 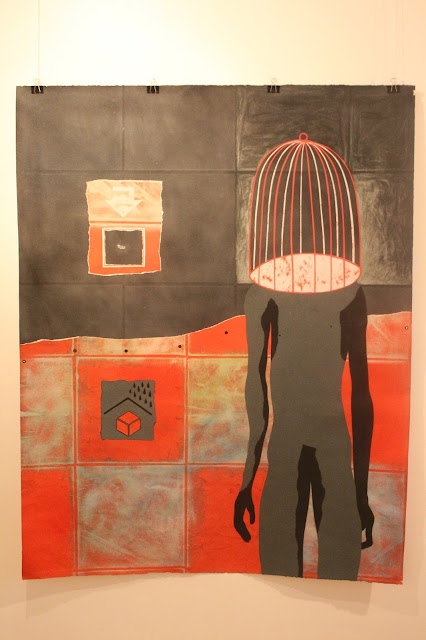 The other half of his art (created on heavy-duty paper specially made in France) have heads with eyes wide open and boxes held in hand, as if the item hasn’t had the same profound effect on the consumer. 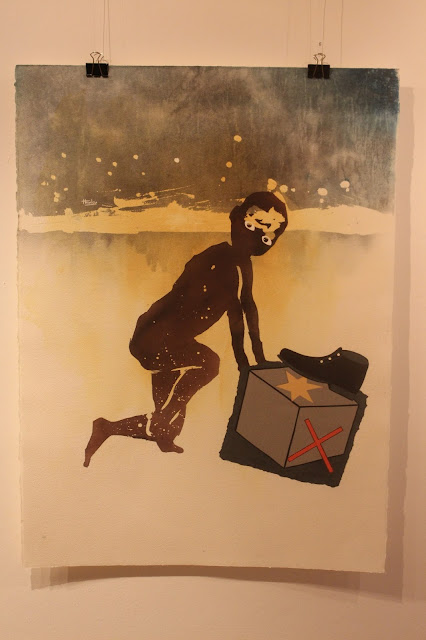 These are subtle differences, but for Thuku, every symbol has significance and every layer of the collage has been created, not by painting but either by washing the heavy paper in watercolor or rubbing it over a metallic grid or using masking fluid and paper-cutouts carefully glued into place.


Thuku isn’t shy about trying out new techniques and in ‘Barcode’, his efforts reflect a critical commentary on the way ‘things’ have taken over people’s lives, transforming the way we see, feel, think and desire. 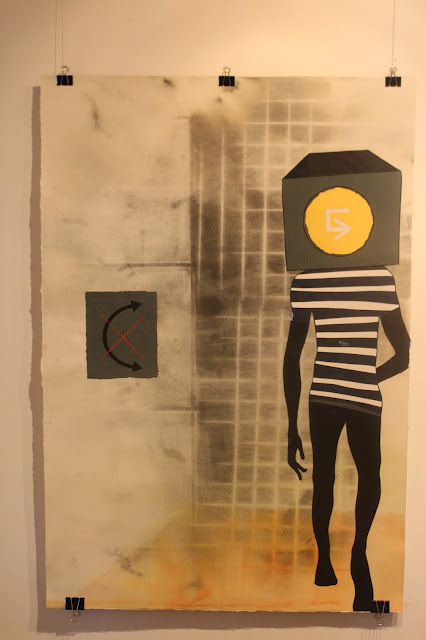 Meanwhile, there’s a lot going on in the Nairobi art world currently. Adrian Nduma is exhibiting at Polka Dot Gallery (even as his Show at The Talisman just closed). Haji Chilongo’s art just went up at Banana Hill Art Gallery, and Moses Wyawanda’s colorful paintings are on display from tomorrow at the United Nations Recreation Centre for the whole of May 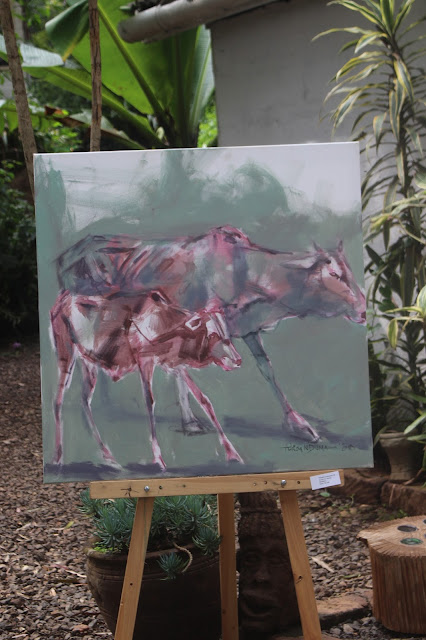 
And tomorrow, 5th May, ‘Conversation in Silence’, paintings by James Mbuthia created in the past year will go on exhibition at One Off Gallery.


Finally, this past Tuesday at the Nairobi Gallery (next to Nyayo House), ’50 Years of Oshogbo Art’ is a glorious exhibition that just opened on Tuesday and is well worth at trip to the Pioneer Artists Gallery inside the old PC’s brick building now known as Nairobi Gallery.
Posted by Margaretta wa Gacheru at 01:49