LENORE'S LOVE FOR TEACHING STREET KIDS TO BE ARTISTS 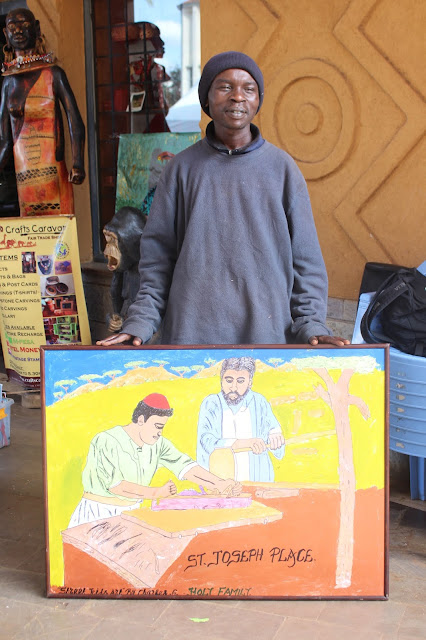 STREET CHILDREN AS CREATIVES, NOT CRIMINALS
TO AUSTRALIAN ARTIST


Street Children are represented in virtually every town in Kenya today, and there’s a broad consensus that those who walk around city streets begging with a bottle of glue in hand are either criminals or just generally “bad people”.


They’re commonly known as ‘chokora’, a term that literally translates from Kiswahili to mean ‘scavenger.’ But Lenore Boyd doesn’t see them in that light. Instead, the Australian artist who’s lived in Kenya off and on for the last six years is passionate about helping these youth who she’s been working with since she first arrived. It all began with a 12 year old lad she met on the street whose name is Simon. 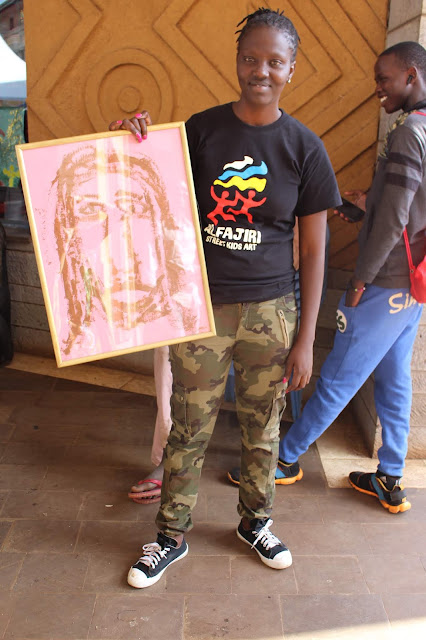 Simon Njoroge is now an 18 year old school boy who loves sports and excels in his studies. But he’s not your average boarding school student. Instead, he’s one of the ‘stars’ in Kenyan filmmaker Eunice Akinyi Brown’s new film, ‘Alfajiri Breaking Dawn’ which was recently shown at the Shifteye Gallery.


The film was part of a larger exhibition called ‘Alfajiri Street Kids Art’ which was organized by Lenore, the founder of Alfajiri. She’s also in Akinyi’s film since it’s largely about what’s resulted from her meeting Simon shortly after she came to Kenya as a volunteer with a church group working with orphans and children who were HIV positive.


Simon was neither an orphan nor HIV positive. But he was from an exceedingly poor background. His widowed mother was so badly off that she couldn’t feed him, leave alone send him to school, which was why he came to town in the first place. He was literally in search of something to eat as well as a way to get into a school.


‘But like so many street children, Simon had nothing and no one to help him climb out poverty. Under such circumstances, it’s no wonder boys [and girls] like him resort to drugs to numb the pain of poverty and loneliness,” Lenore says compassionately


“His hands were literally shaking when he came up to me and asked for help,” says Lenore who didn’t see him as a beggar or a thief or any other kind of criminal.


Her response to Simon was quite unlike most people’s reaction to these glue-sniffing kids. Fearlessly, she actually asked him what he wanted and needed. Of course, he needed food. But more importantly, he said he wanted to go to school, which is what she’s been helping him do ever since. She’s also helped him go back to see his mother who she’s helped to start up a small fruit sellers business.


“I’ve always loved Mother Theresa and the work she did among the poor,” admits Lenore who got a bird’s eye view of poverty in Kenya through her initial encounter with Simon. She only stayed in the country for two months initially. But that was time enough for her to get him into a boarding school and to meet several more street boys whose tragic lives touched her heart and transformed her life.


She returned to Kenya in 2015 intent on serving in the slums as a volunteer with the Mission of Charity priests based in Mathare Valley, one of Nairobi’s most notorious slums. But she quickly realized the Mission (which had originally been established by Mother Theresa) served a broad constituency and ran many programs. In contrast she felt her calling was specifically to assist street children like Simon. And that’s how she decided to set up Alfijiri three years ago.


“The Mission feeds more than 100 street children three times a week, plus it gives them [second-hand] clothes and lets them take baths there too,” says John Paul, one of Lenore’s assistants and a friend of the Mission “since [his] big brother is a priest based there.”


It was while working with the priests that Lenore began to feel that much more needed to be done for kids like Simon. “I began to ask myself what I especially had to offer them to hopefully uplift their lives. I realized that as an artist, I could start by offering them art workshops.”


It was shortly thereafter that she registered Alfajiri and began running art workshops for street children every Saturday morning in Mlango Kubwa, one of the poorest parts of Mathare and the place where Mother Theresa first opened her Mathare mission. It was the children’s artworks from those weekly sessions that were first shown at Shifteye and more recently on display at Nairobi National Museum.


The larger paintings were created by teams of 3-4 young artists [ages 13 through 15]. The rest were by individual boys and girls who’d been inspired by Lenore to put down their glue bottles (at least for the 2-4 hours that they paint) and tap into a part of themselves they previously hadn’t known, namely their artistic potential.


Between 25 and 35 kids come every week to paint with Lenore who is painfully aware that she and her workshops barely scratch the surface of the problems these children face. According to a UN study conducted by the Consortium of Street Children in 2015, a minimum of 600 street children move around in Nairobi and between 250,000 and 300,000 in the country as a whole.


To Lenore those figures are underestimates of the reality. Even so, she says that besides Simon, she has seen a solid core of former ‘chokora’ get to boarding school where they work hard to make their way out of poverty and into a better life.


Nonetheless, the plight of the street children left behind is a serious concern of Lenore, especially as she’s seen children die out on the street. And not simply from starvation, pneumonia or TB.


Akinyi Brown’s film illustrates the point that some people unhappy with the swelling numbers of street kids have taken dire action. A few have resorted to giving them food laced with poison, which the boys devour and shortly thereafter are found dead. The film also shows small children with deep gashes on their heads, apparently received while they’ve been sleeping out in the street or in Mlango Kubwa’s massive garbage dump.


Lenore is also concerned that in addition to the poison and the pangas (large knives), some street children have reported to her how their friends have been shot at point-bland range by men in uniform. Yet no one speaks about these extra-judicial crimes which she describes as murder.


In Brown’s film (which can be viewed on YouTube) one boy narrates the way he and his friend Nicholas were asking for food from people in cars and given a parcel of it by one car driving by.


“We were going to eat together, but then I had oil on my hands so I went to wash them first,” he says. “When I got back to my friend, he begged me not to eat the food as he lay dying. When I called for help, no one came except other [street boys] who were going to help me take him to hospital. But he was dead before we could even lift him up,” the boy tells Brown.


“I fear for their lives,” says Lenore who adds this is one reason she wanted to hold their art exhibition. “I want people to change their perceptions of these children so they’re seen as human beings who need our help, not vermin that need to be exterminated.”


Posted by Margaretta wa Gacheru at 12:13