AN AFRICAN QUEEN COMES TO TOWN 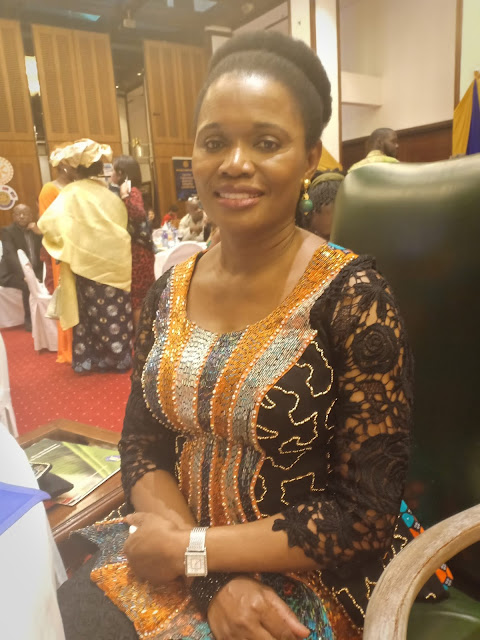 Where does one find an authentic African Queen? Whoever knew that one existed apart from the award-winning Hollywood film that starred Humphrey Bogart and Katharine Hepburn entitled ‘The African Queen’?
If you live in Uganda, it must be common knowledge that they do exist. But we had to wait until last Sunday evening at Laico Regency Hotel to meet Her Royal Highness Queen Sylvia Nagginda Luswata, The Nnaagagereka of the Kingdom of Baganda.
Queen Sylvia had come to Kenya specifically to serve as Guest of Honor at the installation of her fellow country - woman Jessica Kazina as the next president of the Rotary Club of Nairobi, the oldest Rotary Club in Kenya and the third oldest in Africa. 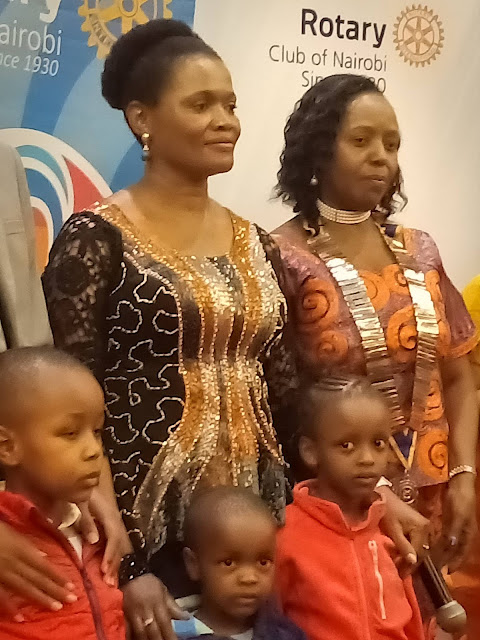 The Nnaabagereka didn’t come to Kenya solely because she was invited by her Ugandan ‘sister’. She also came in support of women in leadership, one of the many causes she has supported even before she co-founded the African Queens and Women Cultural Leaders Network in 2013 with HRH Queen Mother of the Tooro Kingdom, Best Kemigisa Olima.
In her keynote address in Nairobi, Queen Sylvia expressed her admiration for Rotary and its “noble values” of philanthropy and service above self. She said she felt Rotary shared with her Foundation the spirit of ‘ubuntu’ or selfless, ethical and moral service to the community.

In 2000, Queen Sylvia founded her Nnaabagereka Development Foundation to promote the fusion of modern and traditional values and practices. Through the Foundation, she has been involved in numerous causes, many of which are related to education and mentoring of the most vulnerable sectors of society. The Foundation has also been involved in everything from cultivating an ‘HIV-free generation’ to supporting other health and family-planning initiatives to the empowerment of women and girls. Queen Sylvia also serves as Patron for the Special Olympics Uganda and has established branches of her foundation in the UK, North America and the Diaspora generally. 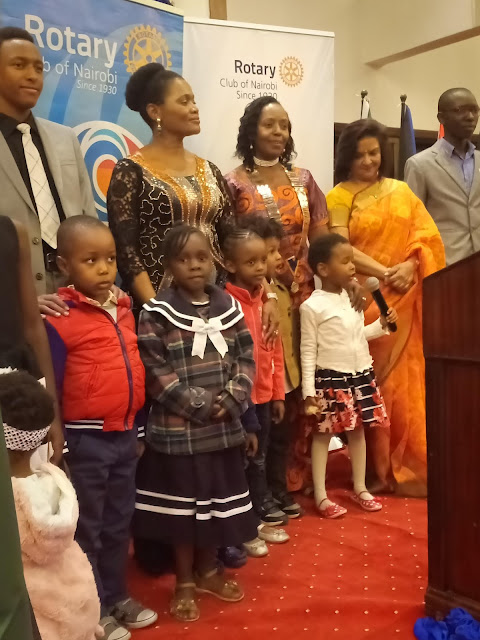 A graduate of New York University with a Master’s degree in journalism and public relations with a minor in economics and development, the Queen told BD she had no idea in her student years that she was destined to marry the Kabaka of Baganda, Ronald Muwenda Mutebi II in 1999. But if he had been looking for a strong beautiful woman who would be a perfect partner in service of his kingdom, he couldn’t have asked for more than Sylvia.
The installation of a new Rotary club president is an annual event so the evening included appreciation for the outgoing President of the Nairobi Central Club, Salim Fazal who recounted a wide range of the club’s service achievements from his year in office.
Among the most outstanding were the Eye Camps that the Club had conduct in Kisumu with Dr Mukesh Gohil who removed cataracts and restored the vision of hundreds of low-income Kenyans.
The outgoing president also noted that the club has been actively involved in various environmental issues including the sharing of energy-saving jikos and providing clean water to Kenyan communities. 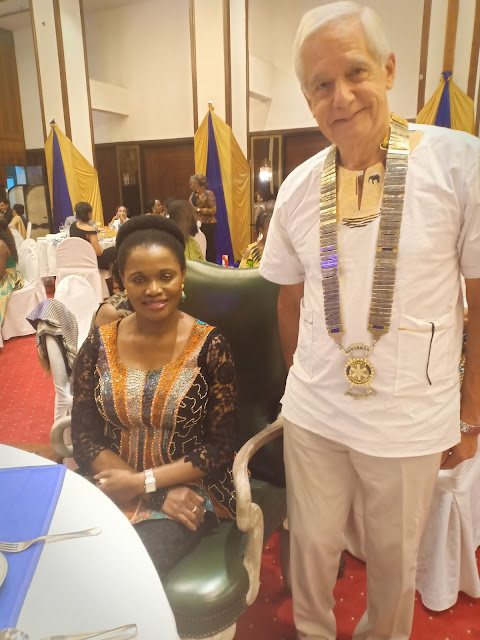 
Rotary’s Outgoing District Governor Jeffrey Bamford (who is just completing his term of office) gave a brief history of Rotary International which was started back in 1905 in Chicago, USA, by Paul Harris and several other business men.
“Rotary’s initial appeal was friendship but its service orientation has also been there from the beginning,” said Mr Bamford. He explained how rapidly the organization grew. Initially, two more clubs, one in New York, another in California were established in 1910. Subsequently, it expanded to embrace Canadians, Europeans and in 1921, the first Rotary Club was started in Johannesburg, South Africa.
It was only in 1987 that the first women were admitted to Rotary Clubs with Evelyn Mungai being the first Kenyan woman to become President of the Nairobi Central Club. “Since then, women’s participation in Rotary has grown tremendously,” said Mr Bamford. 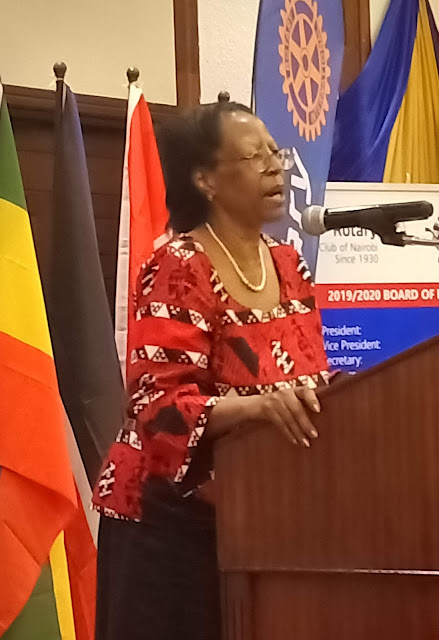 Evelyn Mungai Eldon, the first woman President of a Kenyan Rotary Club in 1987

He said the total membership of the global organization is 1,260,000 as of this year with women constituting 23 percent of members in East Africa. He added that currently Tanzania and Uganda are the fastest growing clubs in the region, but in Kenyan women constitute 48 percent of the country’s membership.
The proudest achievement that most Rotarians observe is the founding of the Polio Plus campaign in 1985. “That year 350,000 children were struck with polio, but by 2019, the latest figures are that 22 cases have been recorded, with 16 in Pakistan and seven in Afghanistan. 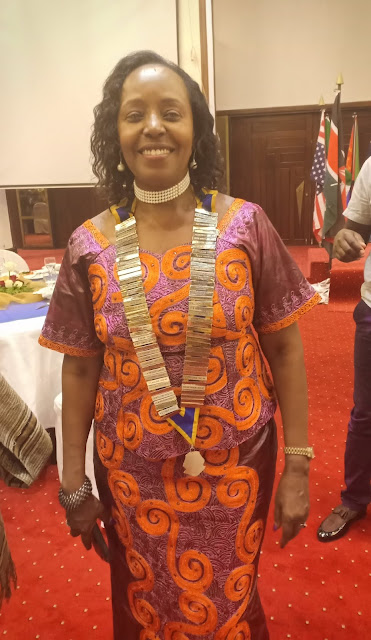 When the new President had her moment to speak, she expressed the hope that her year in office would be as exemplary as the previous one. She has many new projects she plans to initiate as well as providing ongoing support for the ones that have made the club among the leading philanthropic organizations in Kenya and East Africa. 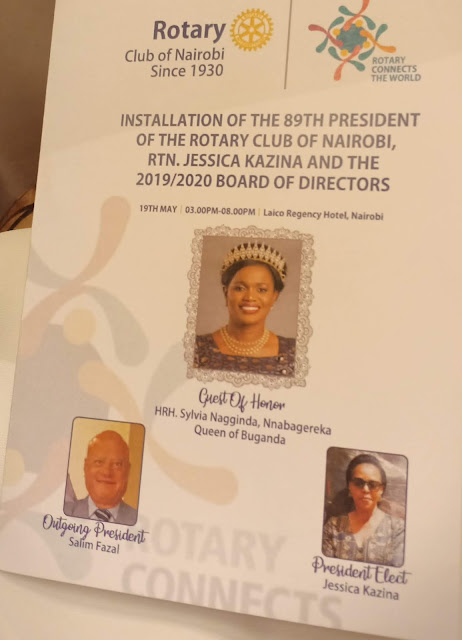 Posted by Margaretta wa Gacheru at 12:09