PASTORAL AND INTERPLANETARY PAINTINGS AT ONE OFF 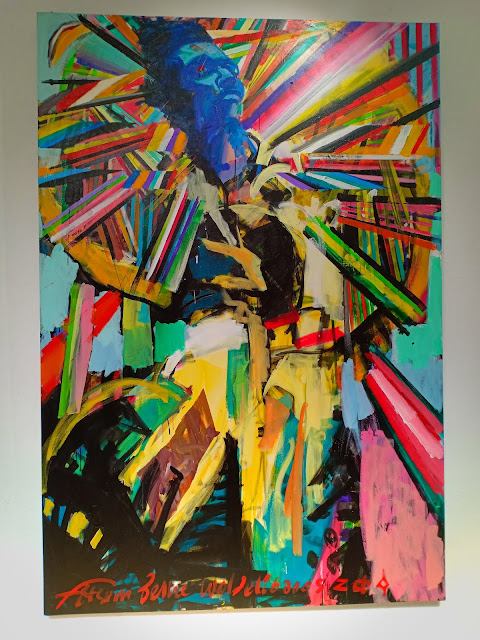 At RaMoMa Gallery, Carol Lees used to put on no less than seven exhibitions at a go when it was located in Parklands, in a veritable mansion. That’s why one might think it was a breeze for her to put up just two exhibitions which opened simultaneously last weekend, one in the Stable by Fitsum Berhe Woldelibanos, the other in the Loft by James Mbuthia. 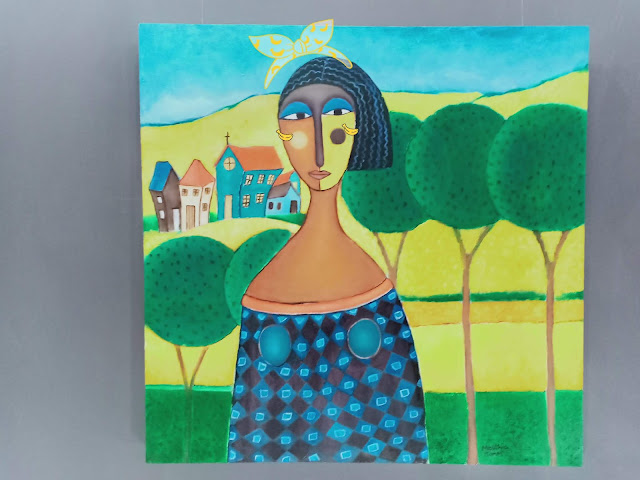 Yet whether it’s two or ten, the effort to beautifully curate an art exhibition is hard work, but it’s work consistently achieved at One Off.
One doubts that Carol meant to pair the shows of Fitsum and James, despite their having a few things in common. For instance, both focus on portraiture, although Fitsum’s attention is on handsome black men while James’s is on wistful African women.
Both are also colorists who utilize rich, radiant color palettes, yet Fitsum’s colors veritably explode on his canvas while James’s are carefully contained in delineated shapes that give them a cooler, more soothing effect. 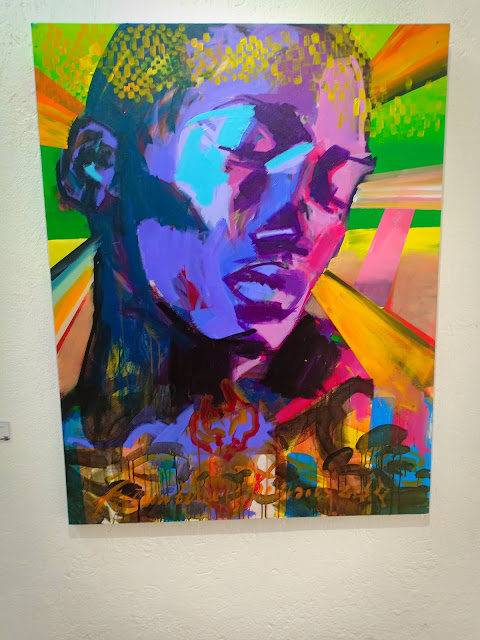 Indeed, James says this show is an extension of the one he had last year at One Off entitled ‘Conversations in Silence’. His two shows are very similar except that the artist is finely tuned to the environment in which he paints. That includes the weather, terrain, sights and sounds of the outdoor spaces that he picks in which to paint. And those have changed over the course of the past year. Those subtle changes are also manifested in his art. 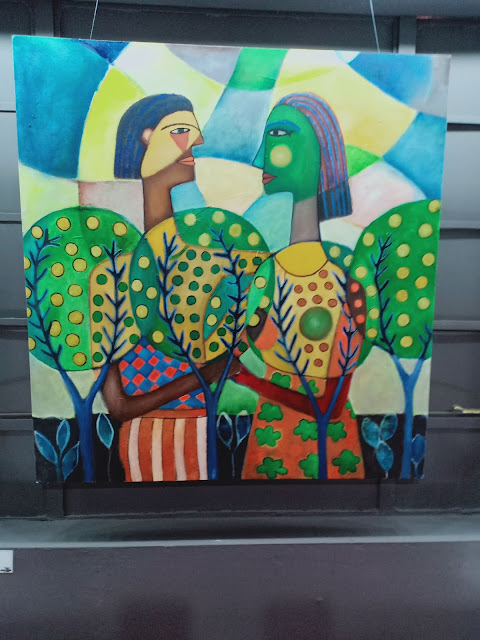 Fitsum is also finely tuned to the environment in which he paints. But his terrain is more metaphysical than physical, more transcendent than terrestrial. And where James’s pastoral paintings have a soothing effect, Fitsum’s feel more psychedelic, as if his works are like time capsules taking his characters into other dimensions of space and time.
A painting like ‘Arise’, for instance, has that feeling of breaking out of one dimension and exploding head-first into another. The energy required to make that extraterrestrial leap into this curious new realm is easily inferred from Fitsum’s use of bold-stroked acrylic lines of hot pink, yelping yellow, glowing green and fiery red and orange stripes. 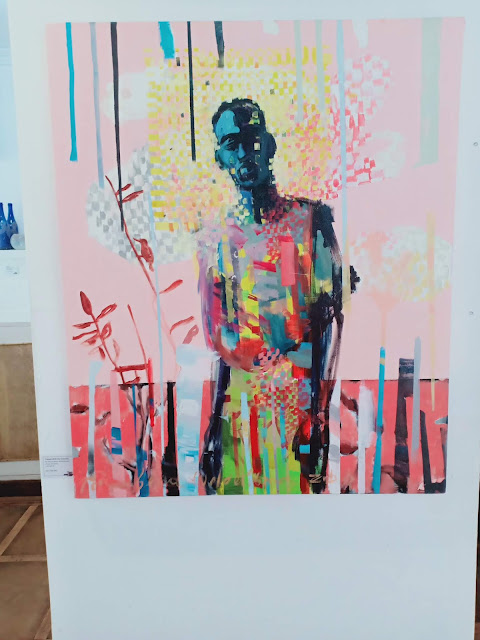 Another one of his works, “Contact with the elements’ also suggests that the ‘contact’ is with otherworldly ‘elements’. It’s the coolest, most soulful piece in the show, given his blue-faced man is halo-headed with a torso tending towards the transparent. The man seems to have already arrived at another level of consciousness and settled into a psychic realm of peace and tranquility.
Yet not all of Fitsum’s paintings take us out of this world. One like ‘The Sacred in Us’ seems to reflect on the present possibility of our being as beautiful as is this multicolored man with his purple, pink and turquoise blue profile. 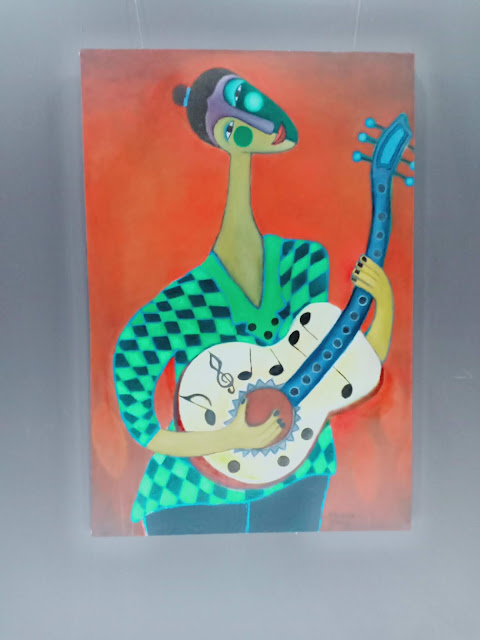 But to attain that beauty, one might need to be as “Lost in Thought” as his man who’s got tiny squares of multiple colors swirling around his brain even as the remainder of background is filled with straight horizontal strokes to anchor him in the present.
Other paintings of Fitsum that feel like present-tense are works such as ‘I am my story’, ‘Veils of Illusion’ and his two untitled works.
One of his most appealing portraits for me in Fitsum’s show is “Idealized self-projection II”. This is the one painting of a younger fellow whose penetrating gaze feels most transparent, direct. Interestingly enough, his face is the only one that looks like his golden brown and red skin tones are the true reflection of the lad’s own.
But the one painting in the show that drew most attention at the opening was Fitsum’s ‘Old Gods New Gods’. Here he creates an iconographic work with three symbols of worship. On the left is the Christian Madonna and Child, on the right an indigenous West African sculpture and in the centre, a shirtless celebrity-chic rock star-rapper, the idol he says is often worshipped by the youth nowadays. 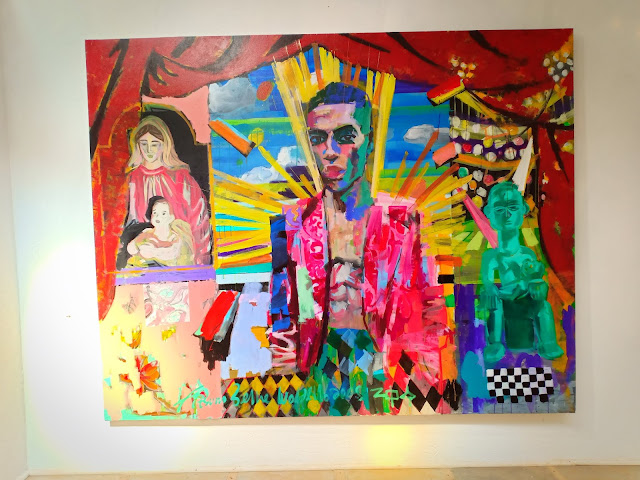 The burgundy curtains draped across three side edges of the painting suggest Fitsum’s work is part of a human drama that we are all watching. Yet his implication could also be that whichever god you choose, that way of seeking transcendence is part and parcel of the human experience. 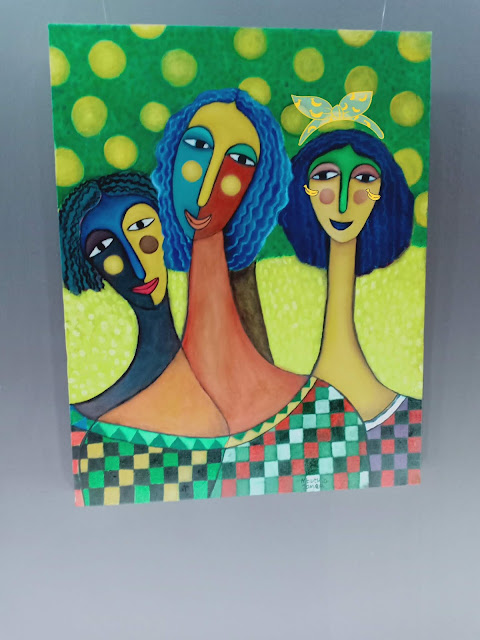 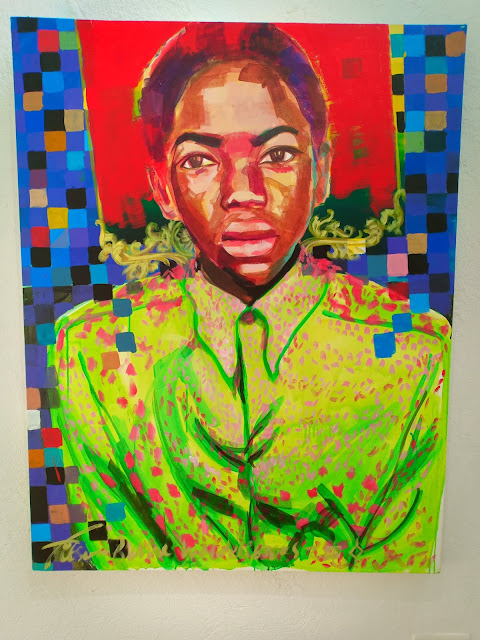 Posted by Margaretta wa Gacheru at 11:02