45 DEGREES KITCHEN: A MEAL TO DIE FOR 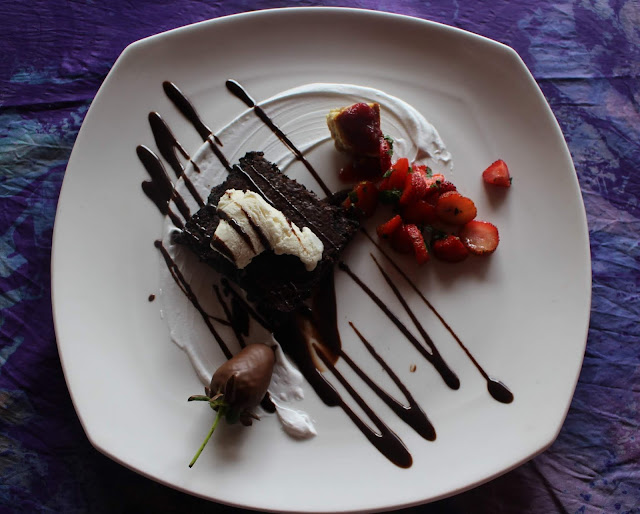 45 Degrees Kitchen is a boutique restaurant nestled so deep inside Garden Estate that you might miss if your eye doesn’t catch the ‘45’ on the cream-colored gate on Marurui Road.
But 45 degrees’ executive chef Harold Sena-Akoto doesn’t mind being discrete since people who understand and adore delicious food always find their way to his front door.
One would never know the Kitchen was once his wife Rose’s family poultry farm, nor that their elegant high-vaulted dining room was once a place where eggs were carefully stored. 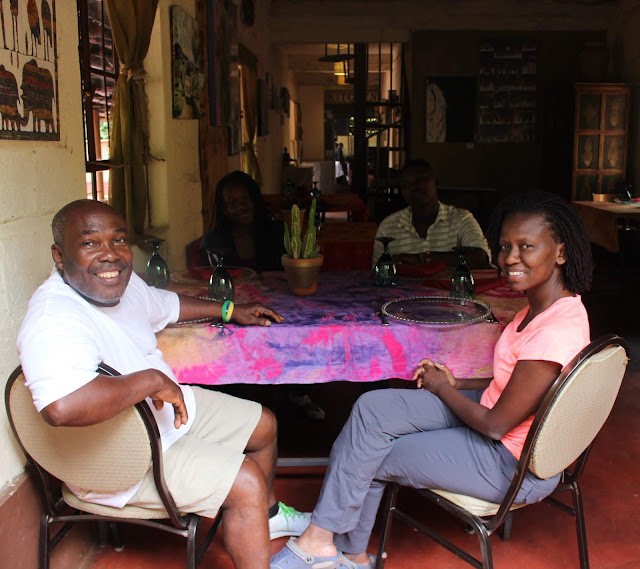 “We made the whole place over,” says Harold who also created a spacious outdoor terrace where tables covered in colorful batik cloths, (hand-painted by the Ugandan artist Anwar Sadat) are either situated in their own separate nooks or aligned near the big house so one can have a better view of the artworks on display. The paintings are by Milena, Samuel Njuguna and Anwar Sadat while the wind chimes and colorfully-beaded wheels of fortune are by Evans Ngure.
But as cozy, attractive and rustic as the Kitchen is, it’s the cosmopolitan cuisine, the genial chef Harold and his gracious wife Rose that bring people back to 45 degrees.
For myself, it was the menu that assured me I would have to come again since there are so many mouth-watering suggestions of soups, salads, sea foods, steaks, stews, lamb shanks, and even spaghettis that I wanted to try. 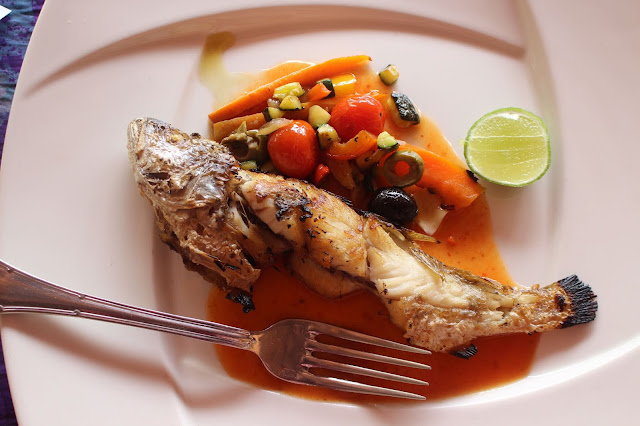 And that wasn’t all. There were also the detailed descriptions of every plate. Each one confirmed the chef to be a culinary connoisseur who’d studied and practiced cooking as a fine art long before he’d come to Kenya in 2015.
“All the recipes are my own,” says Harold who encouraged us to try either the four courses, each one of which he pairs with a specific wine, or not. Otherwise, we could try a la carte, meaning we had the freedom to select anything on the menu.
I chose to try the four courses without the wine, even though I was intrigued by the fact that the Kitchen serves wines from all over the world. The beverage menu says wines come from Italy (where he studied his craft for six years), Argentina and Spain and from Australia, California, South Africa and France. Cognacs, Tequilas, Whiskeys, various Vodkas and Liqueurs are also served. 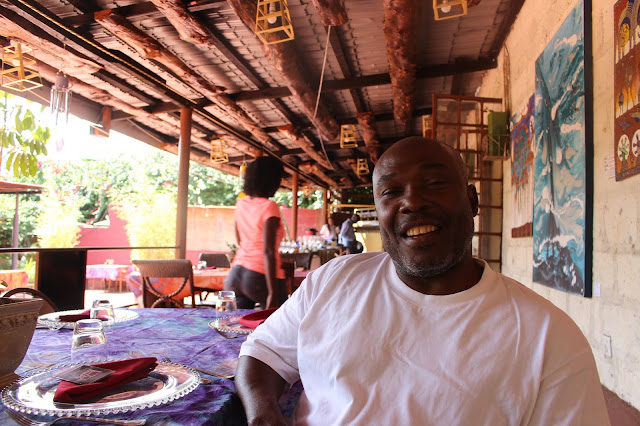 What was significant to me was Courses No.1 through 4. Not easy choices to make, but I started with the Roasted Salmon Consomme with Garlic croutons. Harold, who’s originally from Ghana, explained the salmon was flown in from Norway. I agreed that one bowl could easily be a meal since the salmon was served in big chunks and the soup itself was super tasty, spicy and slightly hot.
I could have stopped feasting there and then. The consommé (soup) was deeply satisfying. But I’d already deliberated on Course #2. As I have a weakness for fish, I tried the Grilled Malindi Deep Sea Trout with roasted pepper sauce and olive salsa.
Again, the fish was delicious. This time it literally fell off the bone, into a sauce that was savory and sweet. “I have a fisherman friend who brings freshly-caught trout to me regularly,” Harold says with a touch of pride. 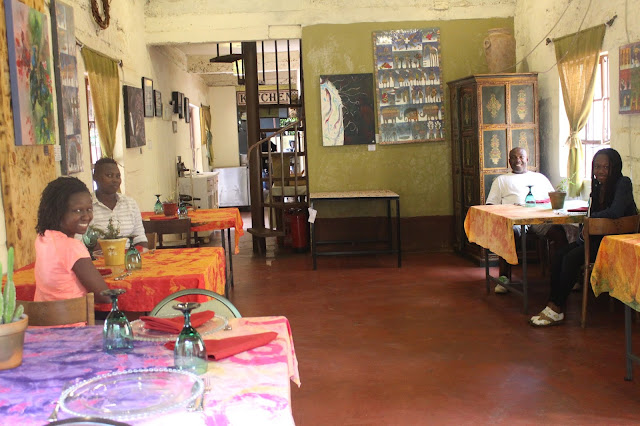 Course No.3 could have been a sirloin steak, Mongolian Lamb or Pan Fried chicken. But again I had to go for the fish. This time it was Pan Fried Red Snapper topped with olive chumichuri Burgundy sauce. It was unbelievable. Every morsel of fish had a uniquely flavorful taste.
If I had tried a la carte, I could have had the Ghanaian style Tilapia, or the Fisherman’s stew made with Snapper, Lobster, Mombasa Shrimp and coconut milk. I could have also tried the Tuscan Country Lamb Shank roast, the Rib-Eye Steak or even the Green Thai curry.
But I was happy with what I had. I couldn’t believe I was still keen to try Course no.4 as I have ‘a thing’ for chocolate. Harold’s Flourless chocolate [cake] was covered with cream caramel accessorized with a chocolate-dipped strawberry and a “cheese tart for garnish” the chef adds. 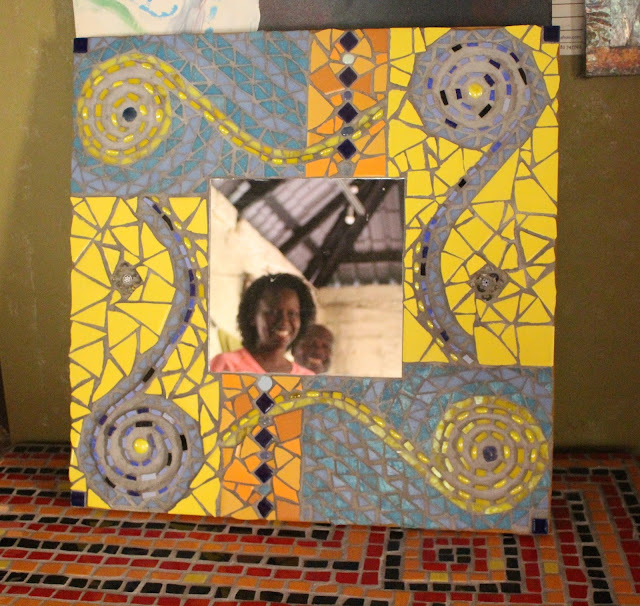 I veritably roll out the front gate of 45 degrees, I’m so full. But if my meal was more than I normally consume, I must admit I just had a meal “to die for’.
One hears about guys on death row getting to order whatever they want for their last meal. For me, it would have to be the Four Courses from the 45 Degrees Kitchen.


Posted by Margaretta wa Gacheru at 06:32