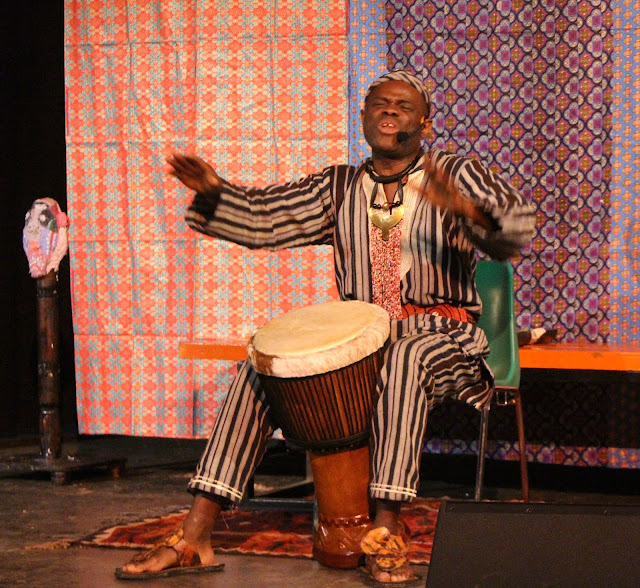 Maimouna Jallow is a master storyteller, an award-winning one at that. As such, she’s been to storytelling festivals all over the world, performing among other marvelously amusing stories, ‘The Secret Lives of Baba Segi’s Wives’ by Lola Shoneyin. She’s also been involved in revitalizing the (nearly lost) art of storytelling.
Last weekend, Nairobi experienced some of the benefits of Maimouna’s meeting many brilliant storytellers in her travels. She brought a number of them to perform at her ‘Re-Imagined Storytelling Festival’ at Alliance Francaise. They included artists from South Africa, Sierra Leone, Morocco, Australia, and Gambia (where Maimouna is originally from). She even invited the West African kora griot Sanjally Jobarteh to play during the premiere performance of ‘The Door of (No) Return’ and give a captivating kora concert the night before the Fete. 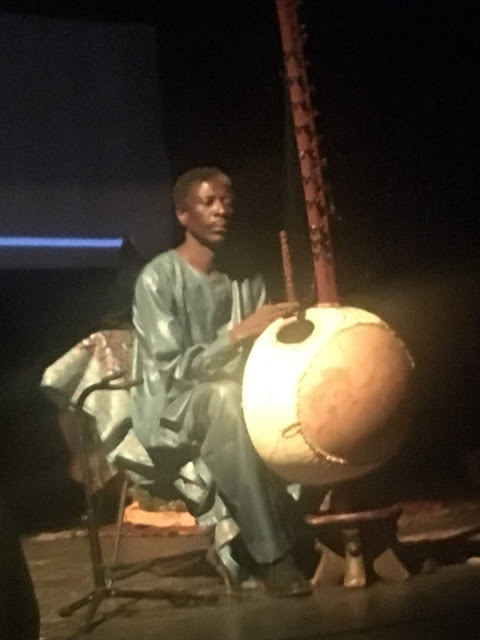 In fact, the Festival ran throughout last week since the visitors told stories to youth everywhere from Eastleigh and Buruburu to Mathare Valley. Several of them also gave master classes on facets of storytelling the day before Saturday’s all-day event. That was where one got to see and feel the magical power of these Pan-African word wizards who, like Usifu Jalloh, revealed a myriad of secrets to becoming a story specialist like themselves.
Kenyan storytellers were also involved in the festival. They included Hellen Alumbe Namai and Mumbi Kaigwa who shared stories with kids in the Reading Nook; John Namai and Patrick Gachie who performed with Maimouna in the afternoon, and others, including Muthoni Garland, Wangari Grace, Chief Nyamweya, Chombe Njeru, Mshai Mwangola, Ayana Michelle and more.

The only problem with the Festival was that there was so much to see and watch (given there were two stages occupied throughout) that it was impossible to listen to everyone on that one Saturday. I was fortunate to watch Moroccan artist Jawad Elbied, Nomsa Molalose of South Africa, Lily Rodrigues-Pang of Australia, Alim Kamara and Usifu Jalloh both of Sierra Leone. And among the Kenyans, it was able to see storytelling performances by Muthoni Garland, Chombe Njeru and Chief Nyamweya (who came with his new graphic novel, Art of Unlearning, hot off the press). 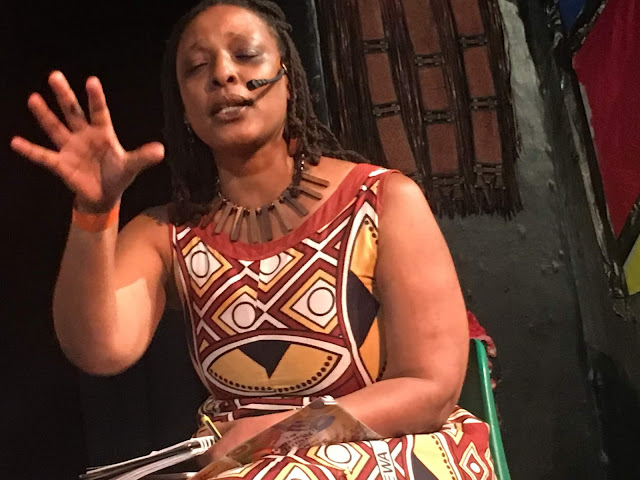 What was also hot off the press was Maimouna’s brand new anthology, ‘Story, Story, Story Come’. She’s the editor as well as the founder of the ‘Re-Imagining African folktales’ project which she launched back in 2016 and which resulted in both the book and the festival. The project itself aimed to revive the age-old art and tradition of African orature (oral literature) and storytelling. But it was also to modernize the folktale so that storytelling itself has meaning and relevance in an age when social media and many other forces are threatening the very art of orature.
Fortunately, once Maimouna put out a call for African writers and storytellers to ‘re-imagine’ the African folktale, she got an overwhelming response. It was a challenge for her to select only twelve out of the numbers she received. At the same time, it must have been easy to pick delightful tales like ‘Why chickens do not fly’ by Nigeria writer Nnamdi Anyadu and ‘When the moon learnt to be kind’ by South African writer Gugulethu Radebe. 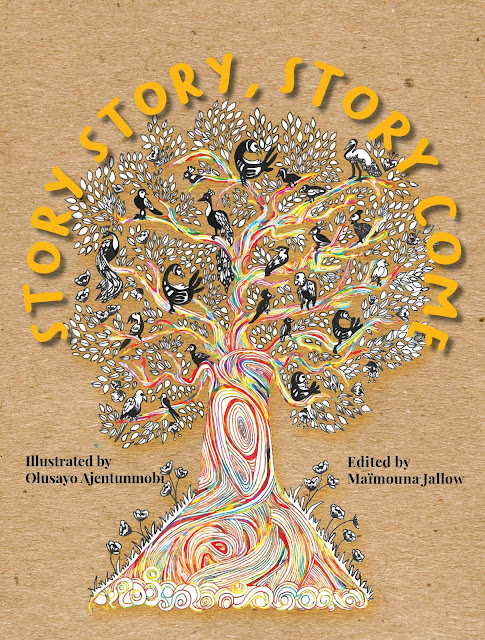 The stories come from all over the region, from Cameroon, Gambia, Ghana and Nigeria as well as South Sudan, South Africa, Zambia and Kenya.
The anthology together with its audio version also made their premiere appearance at the Festival. And to whet the public’s appetite for the anthology and share some of the stories in a dramatic format, Maimouna also created ‘The Door of (No) Return’ which adapted three of the stories for the stage. 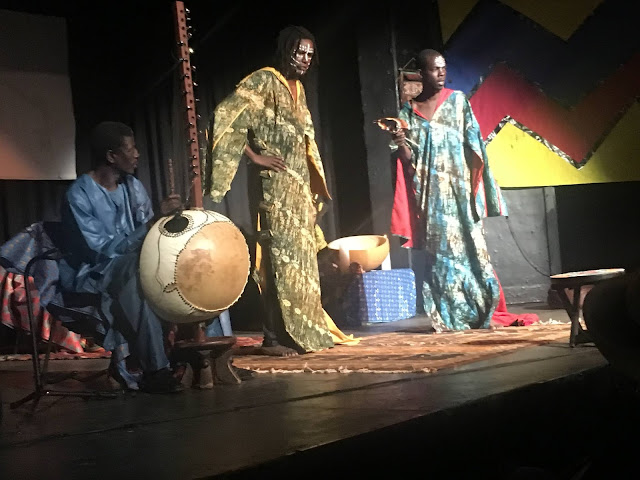 The story that made me want to rush out and get the book was Maimouna’s telling the story of The Water Spirits. They had it in for the humans who they knew to be corrupt and no good. But they adopted a little one who they had unintentionally orphaned. That little girl was sweet, beautiful and gifted. But she got spoilt and turned out to be just as self-centred, proud and treacherous as the water spirits knew the humans to be.
One will have to get the book to find out what happens to the little girl (who was ‘more beautiful than Beyonce!’). 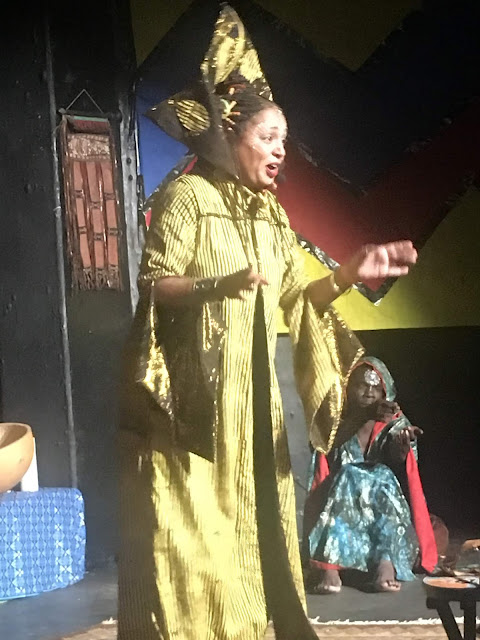 In the meantime, performances by Sanjally, Usifu, Maimouna and Muthoni assured one that the art of the griot and the storyteller are alive and well in Kenya and Africa. 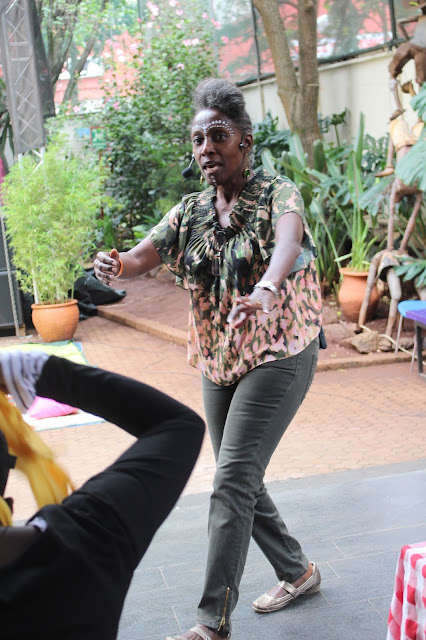