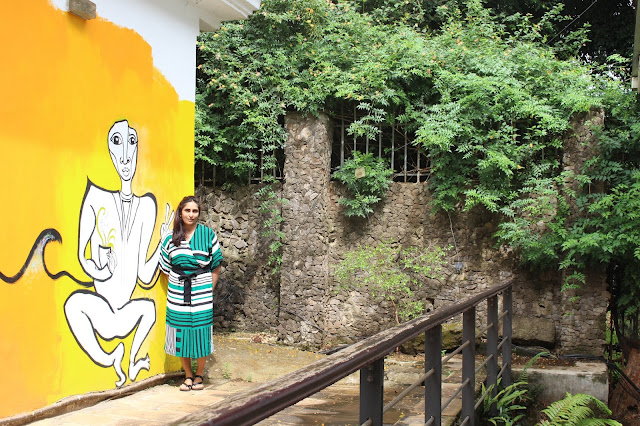 When Niketa Fazal isn’t busy painting or assisting her architect spouse in rehabbing their house, one of the three homes that occupy their family’s land in Runda, she’s gardening up a storm. She says her gardening is simply one more dimension of the love she has for beauty and for seeing that beauty grow. 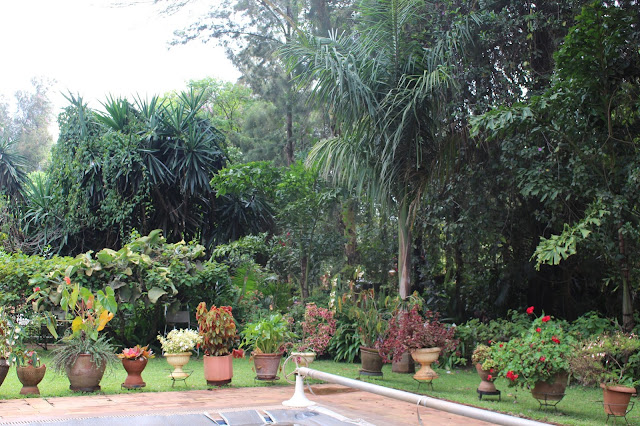 Her family and friends saw the way her own artistry has grown when she recently exhibited her latest paintings at the Village Market. But it’s back home in the family garden that her passion for beauty also takes the tangible form of everything from her Hanging Heliconia, (which she says people often mistake for an orchid) to her Royal Palm (which stands astride before the deep end of the family’s swimming pool) to her beloved orchids which weren’t in full bloom just now). “I’ve been a regular participant in the annual Kenya Orchid Show for years, only I’ve not taken part in the last two years, ever since I got back into my painting,” says this card-carrying member of the Kenya Orchid Society.
But even without the orchids, Niketa’s brought up a beautiful crop of flowers, trees and shrubs, many of which surround the family’s pool, the one place where the families of all three brothers often congregate on weekends. 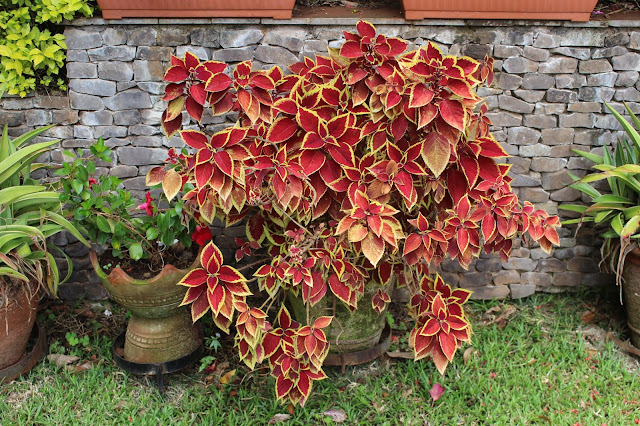 Niketa shares her passion for plants with her father-in-law whose giant potted plants take over one side of the pool. Her sisters-in-law also like flowers although they are not quite so devoted to nurturing their beauty as is Niketa.
Nonetheless, she admits she’s not solely responsible for planting the lush forest of trees that surround the three families’ adjoining homes and serve as dense, leafy wall of tall wafting greenery. The wall creates an illusion that the family exists in an exquisitely green heaven apart and away from the clamor of the outside world. 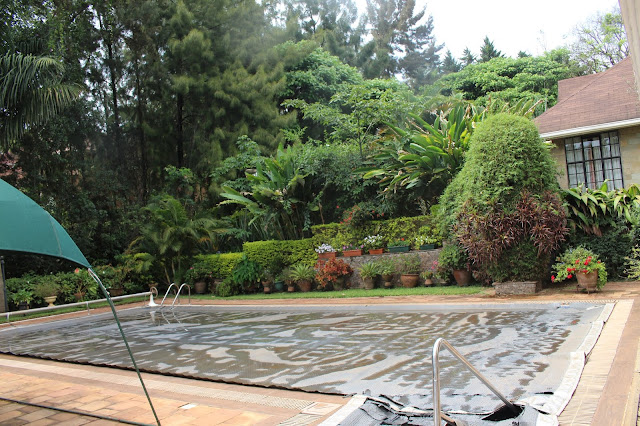 What Niketa is responsible for is most of the plants, including the tall bamboos that extend over and above the family shower which is used after a swim. The bamboos also stand like an impenetrable green shower curtain to keep prying eyes out as one washes off the pool water of the day.
But then, every one of Niketa’s plants seems to be a portrait of beauty, as if the garden were an exhibition space just like the one where she hung her paintings a fortnight before.

As she escorts me around the garden, I feel like we are on a treasure hunt since there are so many exquisite flowers embedded in, under and behind other miscellaneous plants. The most concealed beauty in the garden is the Hanging Heliconia which seemed to be hiding behind the Cyprus tree and the Bougainvillia, its aim being to conceal its delicate beauty from prying eyes. Yet once I look more closely at the flower’s thin red petals, it seems to look like it has two outstretched arms, two legs and even a head with a hat. In short, the flower now looks to me like a dancing clown. 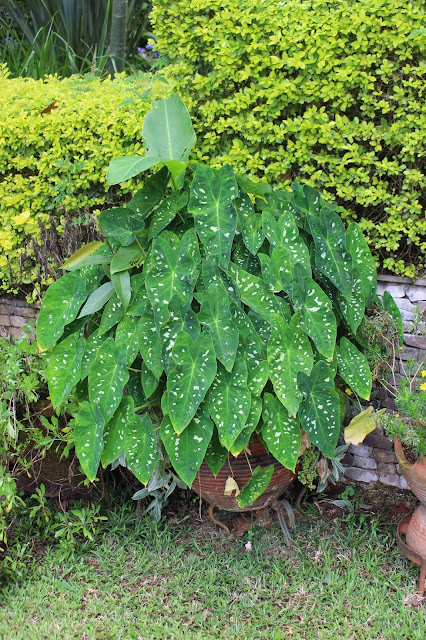 But rather than allow my own imagination to go wild, I agree to move on to the shrub that’s covered in deep red leaves which are edged with a shiny green border. These are her Coleus Hybridius which also look just as healthy and happy as her heliconia does.
Niketa’s other notable shrub stands erect in front of the bamboos. It’s her Croton and its thin, sharp leaves look almost as sharp as knives. The tall shrub seems to stand like a sentinel guarding all bathers from any peeping toms. 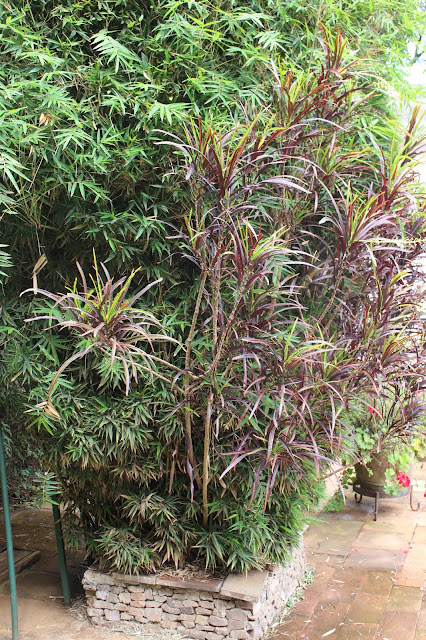 The Royal Palm tree, also known as the Roystonea Regia, is not as tall as the other trees around, but it’s one of a kind, and clearly a royal plant meant to make swimmers in the Fazal pool feel like royals too! 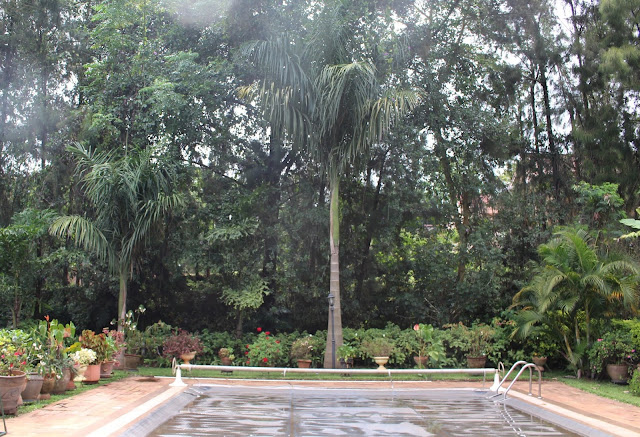 Ultimately, the happiest looking flowers in Niketa’s garden are the Impatients. Their pale pink petals come together at a bright red centre tip (called a stigma) which I suspect is so bright because it’s meant to attract pollinators, be they bees or butterflies.
Niketa says her garden is very happy that the rains have recently come to satisfy the thirst of her trees, flowers and shrubs. But even without the rains, she’s dedicated to keeping them healthy and strong to as to beautify the garden where the whole family often entertains. 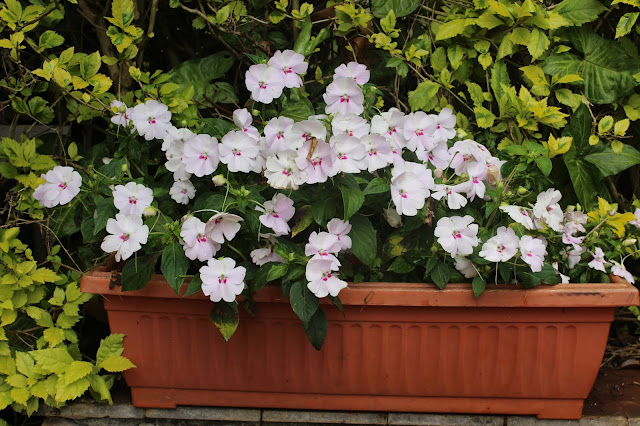 Posted by Margaretta wa Gacheru at 04:32