STORYTELLERS ENCHANTED ALL IN 2016 AT KWANI TRUST 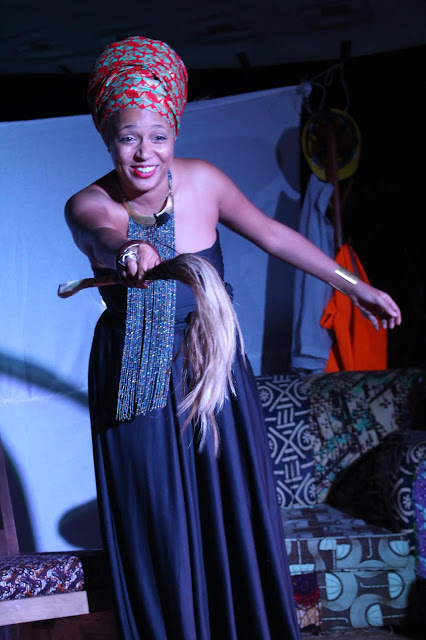 In theory they were five female storytellers scheduled to perform last Saturday night in the production ‘And then, she said…” at Kwani Trust where there had already been a day filled with charming storytelling sessions for children by some on Kenya’s finest performing artists.
But in practice, the five were magicians each weaving her enchanting spell to draw you into her story which in turns, made you laugh, cry, empathize and often hold your breath in anticipation of what emotion she’d arouse in you next.
The only one of the five that visibly disclosed the stories all came from written texts was the first one, Mumbi Kaigwa. She performed a sort of service in that she situated us in ‘the book’, bringing out the element of realism by revealing that all five storytellers would actually be drawing their stories from the original tellers who like themselves are amazingly strong African women. 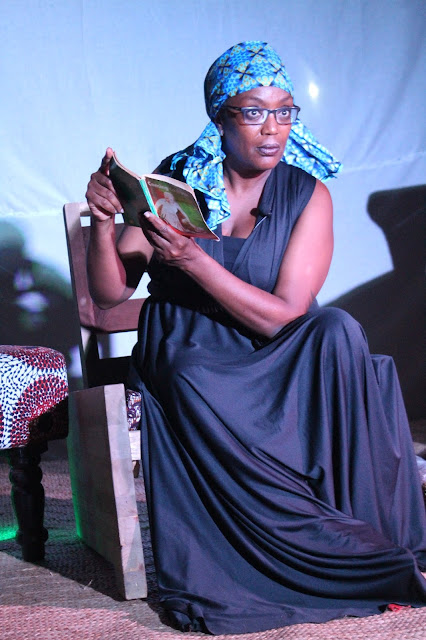 In Mumbi’s case, her reading started from the beginning of the late Marjorie Oludhe Macgoye’s compelling novel, ‘Coming to Birth’. But rather than try to synthesize the whole novel at a go, Mumbi opened up the original setting of the story, thus requiring us to go find out for ourselves what happens to the newly-weds Martin and Paulina.
In contrast, the other four jumped into their stories head first: Raya Wambui, who was appropriately dressed in a hijab, shared the deeply moving story of the period just prior to the Somali civil war. Drawing from the historical novel, ‘The orchard of lost souls’ by the young awards-winning Somali-British writer Nadia Mohamed, Raya bore witness to the painful experience of three Somali women. Her performance was so powerful that one could practically feel the women’s apprehension as each anticipated the coming war. 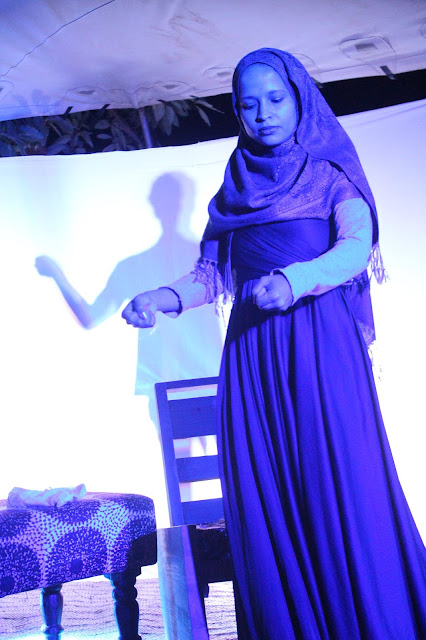 Equally powerfully but emotionally antithetical was Patricia Kihoro’s hilarious performance of Zukiswa Wanner’s painfully funny and profoundly perceptive “Maid in SA: 30 ways to leave your madam.’ Zuki’s a keen observer of the nuances of race relations but it was Patricia who captured the essence of Zuki’s tongue-in-cheek mockery of the white ‘memsab’ or Madam. It was Patricia who made us laugh so hard that we eventually wept from the tummy ache that her interpretation of Zuki’s astute class analysis of white women’s characters brought on. 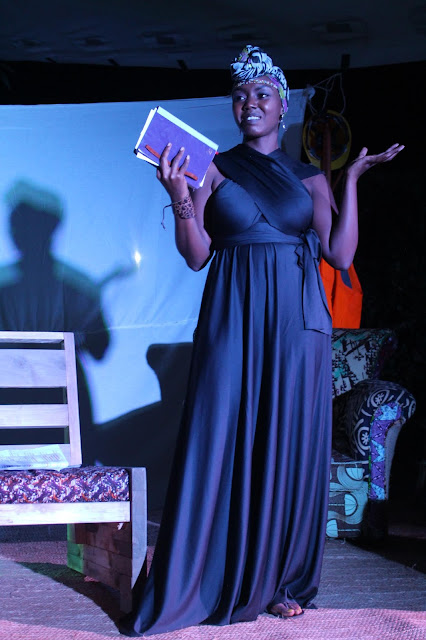 The final two stories were staged to a slightly smaller crowd since some took advantage of the extended intermission to disappear. But it was well worth sticking around since performances by both Sitawa Namwalie and Maimouna Jallow could have stood alone rather be one of five incredible women’s renditions. For not only were the women writers’ stories deeply revealing—although one was steeped in sorrow while the other was exactly the opposite—a kind of celebration of women’s ingenuity and canny ability to outsmart the cleverest man. At the same time, these two deeply dramatic and detailed life stories would never have roused the enthusiastic response that they did if not for the actors, the genius storytellers Sitawa and Maimouna. 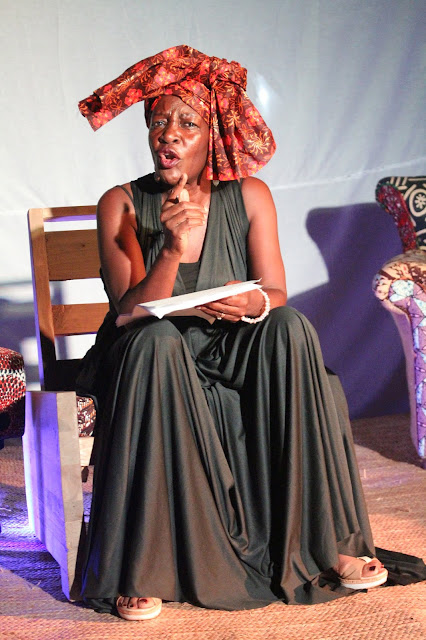 Sitawa’s interpretation of Mariama Ba’s ‘So Long a Letter’ was intimate, soulful and strikingly candid and personal. As if she were disclosing a woman’s secrets and stunning disappointments to a best friend, Sitawa’s story is one shared by a multitude of women not just in Africa but worldwide, wherever a spouse or lover betrays their woman’s trusting love by picking up a new wife without even consulting the first one. Sitawa conveyed the woman’s heartfelt pain so deeply, one couldn’t help but empathize with the experience many women face.
Ultimately, it was Maimouna’s finale performance of ‘The Secret Lives of Baba Segi’s Wives’ that made one most grateful that we didn’t leave at intermission. Each wife’s story is dramatically quite different but Baba Segi’s discovery in the case of wife number five turned the whole tide of this marvelous tale that Maimouna told with gusto and guileless flair. 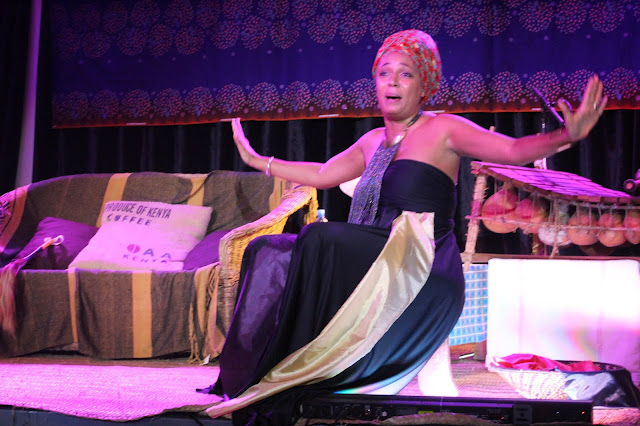 And somehow she managed to synthesize the whole story without losing the pace, humor, personality or power of Lola Shoneyin’s tall tale.
It was Maimouna who produced the whole day and night of ‘Reimagined’ African Folktales and we hope she’ll put on a similar production again soon.
That day could come sooner if she succeeds in receiving an excellent range of modern ‘re-imagined’ African folktales of the sort she’s invited people to send by May 20th to www.reimaginedstories.com. 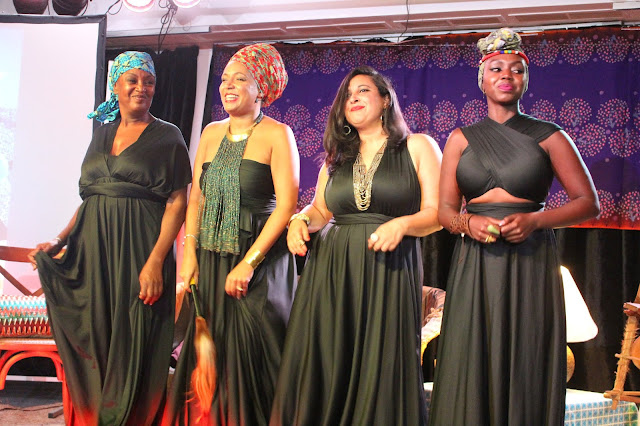 Meanwhile, tonight at The Elephant in Lavington, ‘Tinga Tinga Tales: the Musical’ has its official premier performance. Based on the TV series written by Claudina Lloyd, with music by Eric Wainaina, who also co-stars with John Sibi-Okuma and others, it’s a show not to be missed.


Posted by Margaretta wa Gacheru at 08:24