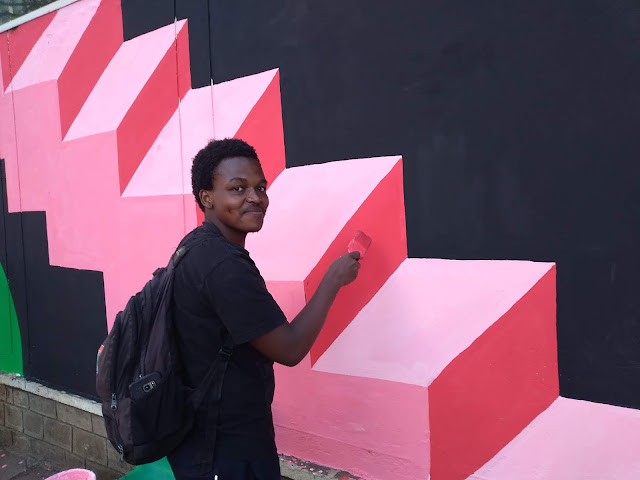 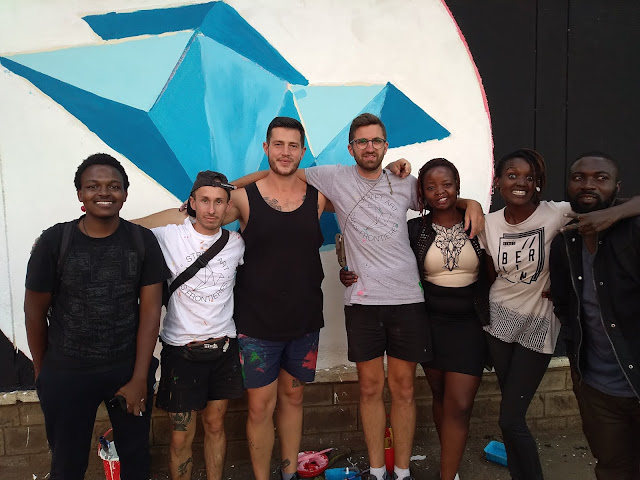 Hephzibah Kisia just got back from Nantes, France a few weeks ago. Yet already she’s gathered a team of Kenyan and French artists and gone all over Nairobi. Their mission has been to paint walls and introduce Kenyan people, particularly kids, to the joys of creating street art.
Before she’d gone to France in 2016, Hephzibah had studied fashion design and opened her own fashion house featuring ‘The Sama Eden’ line.
“I thought I was going to be the next Chanel,” she told Business Daily as she stood outside the back end of Alliance Francaise where she and her fellow artists had been busy painting AF’s tall wall the whole afternoon. 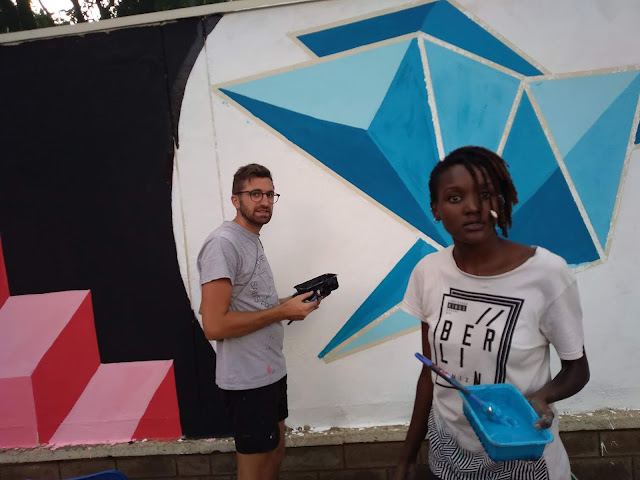 AF is coincidentally where she first started learning French. It’s also where she began rethinking her priorities. That led her back to school to study business and fine art in France.
It was there that she started another company called ‘Switch-A-Roo’ which is basically a cultural exchange program. And that’s what brought her back to Kenya, only now she’s leading a team of French street artists who, like her, love to travel, create art and meet new people in the process of sharing their art. 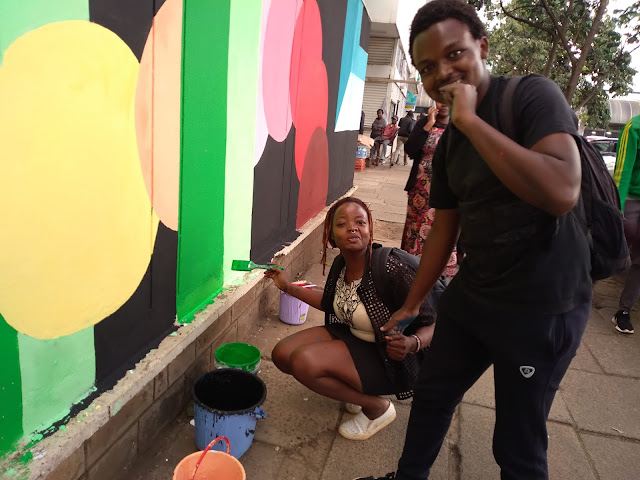 Antoine, Alceo and Mathieu are the three French artists (all members of ‘Street Art Sans Frontieres’) who signed on to Hephzibah’s Switch-a-Roo program and accompanied her back to Nairobi where they’ve been painting street art for the past two weeks.
Along the way, they have been joined by Kenyan artists including Naitiemu Nyamyom, Edmond Nonay and most recently, Namakula Muinde.
“I was just passing by [Alliance Francaise] and saw them painting the wall, so I joined in. They encouraged me to pick up a paint brush and add my contribution,” says Namakula who admits she is more of a writer than a painter. “But the artists were so welcoming, I thought I’d try my hand,” she adds. 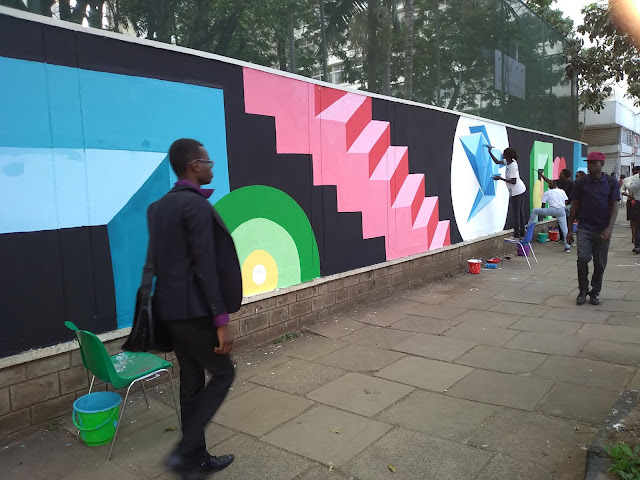 Antoine, who was most fluent in English of the three Frenchmen explains that Namakula illustrates the whole idea of Switch-a-roo. “We are here to bring art closer to the people, and to get them involved in doing it themselves,” he says. “We want local people to claim ownership of the street art we make together,” he adds.
Naitiemu says that when the team went to Kibera and Mathare, there were many more people, especially youth, who wanted to pick up a paint brush and paint whatever wall they could find.
“In the CBD there have been fewer people who’ve stopped to paint with us, but that’s alright. The idea is to connect with local people,” Naitiemu adds. She also observed that along Loita Street where they’d been painting the ten-foot wall, there were more commuters in transit to and from their work than locals with time to get involved with street art. 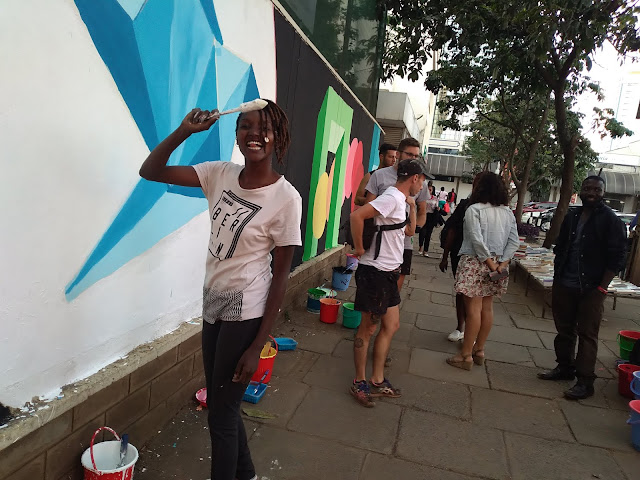 Nonetheless, everyday has been exciting, Naitiemu says, although Sunday was a challenge. They had been careful to collect all the appropriate papers, signatures and approvals from City Council in order to paint everywhere they’d gone, be it Jamhuri, Pangani, Kibra or Mathare. They even got the papers to paint some stairs at one flyover in town. Nonetheless, they were still stopped by City Council askaris who refused to recognize the paperwork and simply stopped them in their tracks.
But the team is undaunted. They’ll continue painting for another week. After that, Hephzibah says they will all be going to France early next year. “That’s the idea of Switch-a-Roo. The French artists came to Kenya to paint after which it will be the Kenyans’ turn to accompany them back to France where we will work together in just the same way. We’ll go to ground zero in the town of our choice and then get permits to paint walls wherever we can.
Antoine adds that he and his French friends have been painting walls for quite some time. 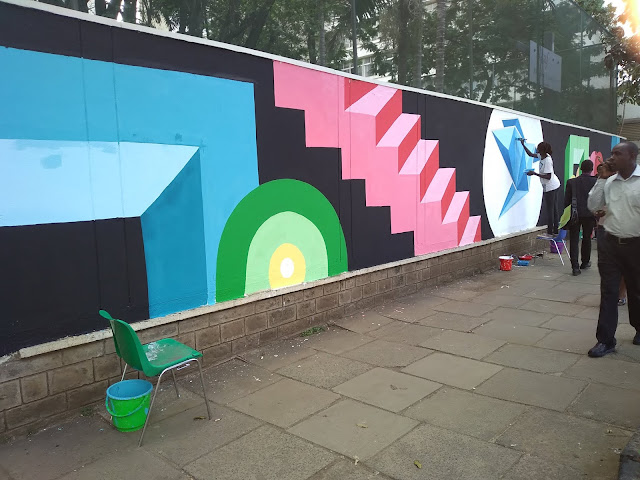 “We all got started as graffiti artists. Otherwise, we didn’t go to art school to learn how to paint. That’s one reason why we know that everyone can learn the joy of painting and expressing themselves through color, form and line. They just need a chance to try. And that’s what ‘Street Art Sans Frontieres [Without Borders] is all about.”


Posted by Margaretta wa Gacheru at 01:16