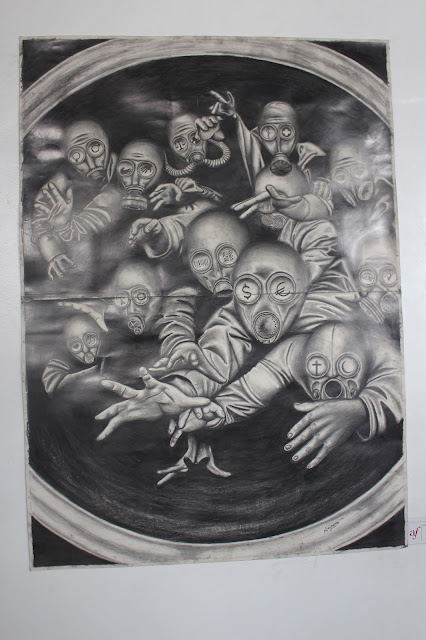 Nicholas Odhiambo’s exhibition at Alliance Francaise, ‘Pedagogy of Oppression’ is one of the most thought provoking shows of 2018. All drawn in subtle shades of black and white graphite, the 29 artworks could require a bit of background to decipher the artist’s figurative imagery.
It might help knowing the title of his show correlates with that of the brilliant Brazilian philosopher Paulo Friere’s classic text, ‘Pedagogy of the Oppressed.’
“Yes, I read his book but I was already working on this series before I did so,” says Niko whose art is surprisingly illustrative of some of Friere’s most profound concepts related to oppression, socialization and education. 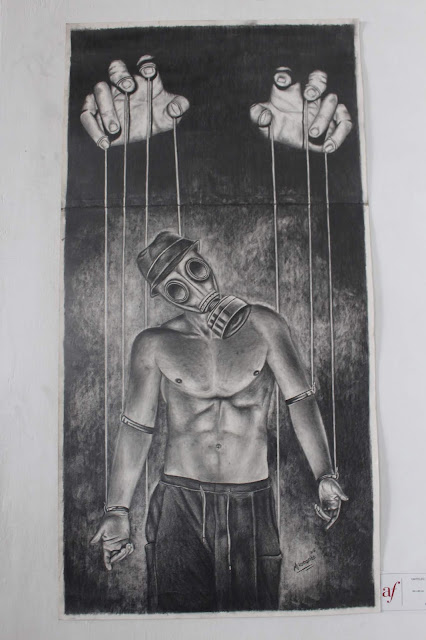 Yet in every way, Niko’s drawings reflect his own critical perspective on Kenyan society. For instance, a work like ‘Watch men 1’ illustrates the way Kenyans can stand by passively and simply watch as their fellow Kenyan is beaten by cops.
Frankly speaking, Niko seems to be more preoccupied with individuals and the various ways they are oppressed, ways they often are not even aware of. The most explicit illustration of that perspective is the work he calls ‘Manipulation’. In it, there’s a man whose limbs are attached to strings being controlled from above, by hands of someone we cannot see.
Across the room at Alliance Francaise are two drawings of men who appear to be the Big Men in charge. Each in a separate drawing, they both look dominant and dangerous. They easily pass for the Oppressor while the one being manipulated represents the Oppressed. 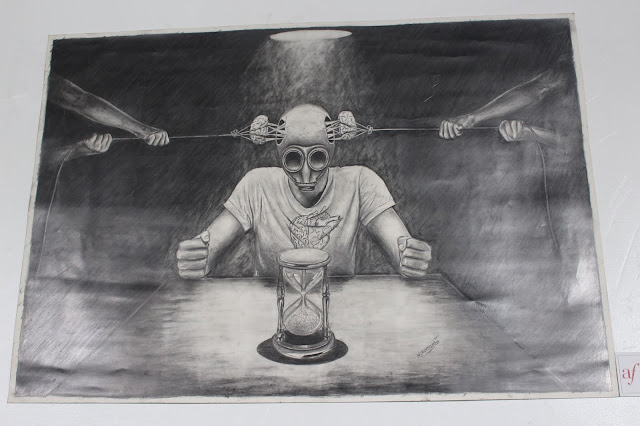 Yet what Niko explores in many of his drawings are the ways individuals internalize their own oppression. He has one series of five drawings revealing one person growing from toddler to pre-teen to student and then into a businessman dressed in a Western suit. Each stage of that person’s life, Niko says, is programmed to conform to restrictive social conventions, That programmed conformity is why the fifth fellow in the series has removed his clothes, symbolizing the artist’s desire to be free from that oppressive mentality and lifestyle.
Whether one understands or even agrees with Niko’s point of view, what also makes this exhibition exceptional is the meticulous manner of his drawing human forms. They come alive despite their all wearing gas masks. 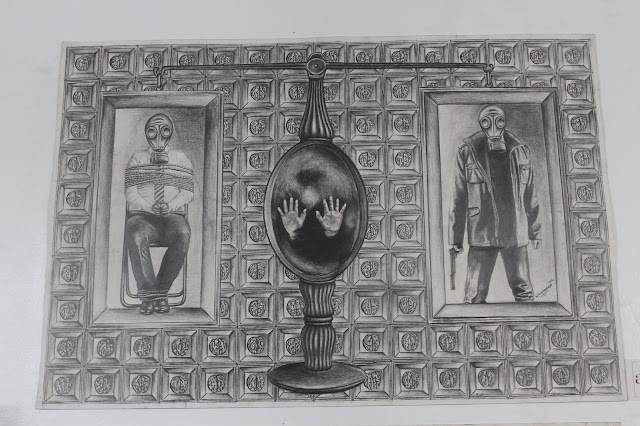 Niko says the masks are meant to reflect the anonymity of his characters, all of whom apparently represent concepts and types rather than specific characters. For example, one of his works entitled ‘Resentment’ conveys the impact that such a negative emotion has on one’s psyche. The one resented is virtually implanted in the resentful one’s head like a tick or parasite.
The psychological nature of oppression is implicit in most of Niko’s drawings. It can be seen in works like ‘In the Box’, ‘Behind Bars’, ‘Human Beam’ and ‘Bondage of Will’ although all of his art challenges the viewer to grasp the meaning of every work. For indeed, all of the drawings make statements about Niko’s perspective on life, humanity and the ways we’re entrapped even though we’re mostly unaware of how we’re confined.
Of the four works just mentioned, probably ‘In the box’ is most transparent. There’s a slovenly-looking guy sprawled in a chair beside a TV that’s got another guy locked inside behind bars.
‘Behind bars’ seems to have a double meaning as the two guys are also behind [prison] bars, but the same bars resemble lines of a bar code which seems to symbolize their being trapped in a consumerist lifestyle. 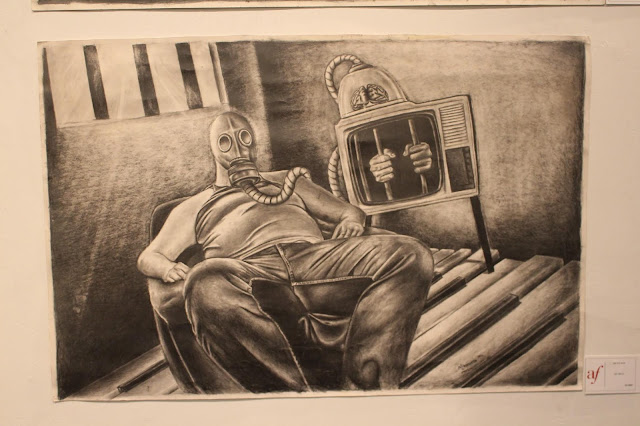 ‘Bondage of Will’ is more obtuse. Yet if you see the man seated in front of a sand clock showing the time running out and the man’s brains are being pulled out on either side of his head by more torso-less hands, you might ‘know the feeling’. He could be struggling to make a decision while his deadline is looming large.
Finally, ‘Human Beam’ is, for me, the most provocative of all. It’s got two men boxed in frames. One’s tied up like a hostage. The other’s holding a gun and looking like the hijacker. But no, Niko says. The two represent the subconscious and conscious mind ever in conflict although the conscious mind (the gunman) is dominant. The soul, he says, is trapped inside the vessel, (representing the body) at the centre of the painting.
Finally, Niko’s ‘Social Purgatory’ speaks volumes about men’s aspirations and desires which are literally represented in their eyes.
In all, Niko’s show requires a bit of thought, but it is well worth the effort. 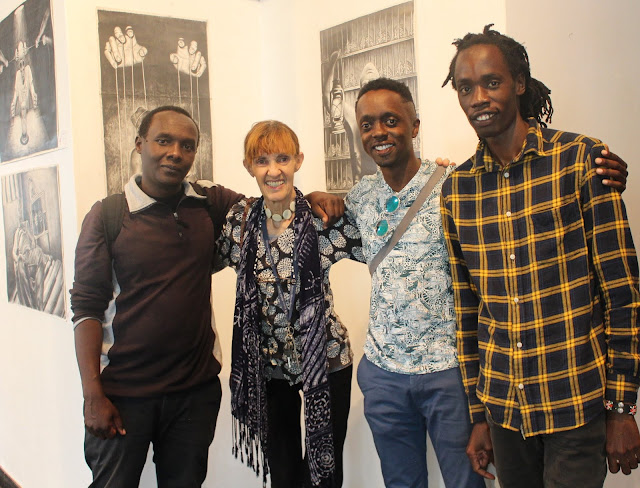 Posted by Margaretta wa Gacheru at 03:45