MORE AT STAKE IN PAA YA PAA FAMILY DISPUTE THAN LAND 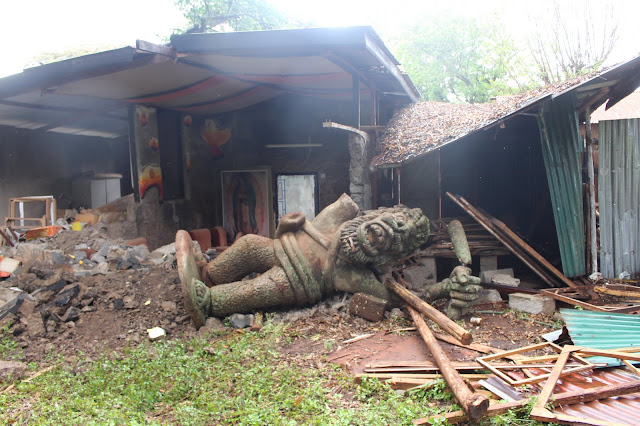 The late Samwel Wanjau is considered by many to be Kenya’s greatest sculptor whose best known work was the 10 foot tall statue of the Mau Mau Freedom Fighter. It stood at the same location from the time it was commissioned by the former Kenyan Attorney General Charles Njonjo. That was at Paa ya Paa Art Centre where Wanjau had created it out of cement and reinforced steel in the early 1970s.
But as of last Sunday morning, 2nd December, the Freedom Fighter lies in pieces on contested ground, on land which according to Nairobi City Council belongs to Elimo Njau, the co-founder and artistic director of Paa ya Paa. But according to a court ruling, half the Paa ya Paa land allegedly belongs to Rebecca Njau, Elimo’s estranged first wife who claims she’s owed half the Njau’s so-called matrimonial land. 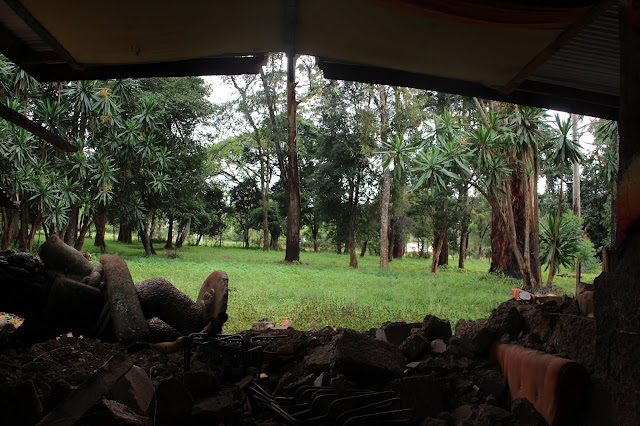 In the name of her alleged ownership of half of PYP’s five acre plot, Rebecca sent workmen to the land nearly two years ago. Without notifying Elimo of her intent, she ordered them to erect an extended mabati fence all along the line she claimed divided her land from Elimo’s. From then on, the fate of the Freedom Fighter was precarious since he stood on her side of the mabati fence.
Elimo has never accepted that the land belongs to himself. “The land was bought by Maurice Wolf, my secondary school teacher, who specifically bought it on behalf of Kenyan artists, not me,” says Elimo.
“I am only a caretaker. My land is in Tanzania,” adds to Marangu-born artist and former Makerere University lecturer. 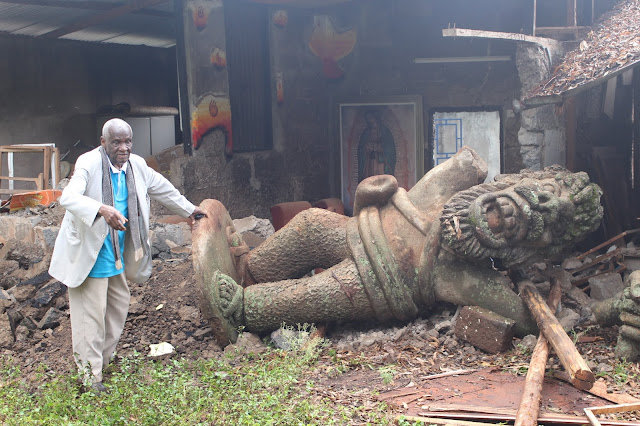 Yet Elimo’s claim is weak from a legalistic perspective since the title deed to the land names him as its owner, not Kenyan artists. Nonetheless, he is adamant his first wife has no legitimate claim to the ground.
Local artists aligned with Elimo have tried to bring down the mabati which they also saw as illegitimate. Yet Rebecca has tried to take them and Elimo to court for trespassing.
In other words, the land dispute is a quagmire. To make matters worse, Elimo at age 87 hasn’t had the means to retrieve the broken pieces of the Freedom Fighter. He has friends, like his neighbor Dr Ernst Tenambergen who have offered to pay to have Wanjau’s masterpiece removed from the contested ground so that the sculpture can be restored to its former glory. But for reasons best known to himself Elimo has refused the help. 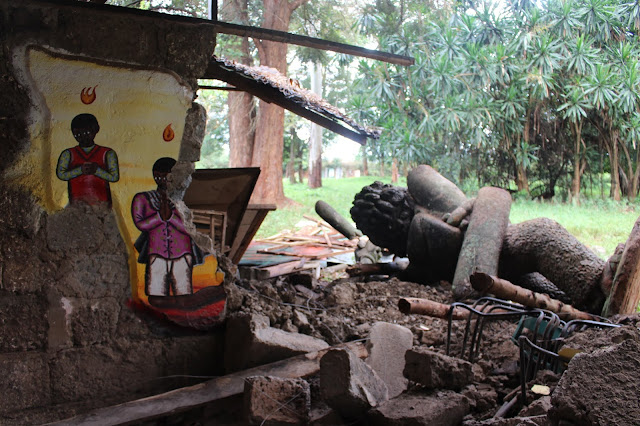 That left the Mau Mau vulnerable to the fate that befell him last Sunday when the gang of ten returned to destroy not just the Freedom Fighter but also the wall of the Njau’s ecumenical chapel which had stood adjacent to Rebecca’s mabati fence. They also did serious damage to PYP artists’ storage rooms where priceless artworks were being kept.
According to John Njuguna, the caretaker employed by Rebecca to look after the two and half acres that she claims, he had been informed by her in advance that her men were coming to do her job. Nonetheless, she hadn’t told Elimo that they were on their way to remove all properties remaining on more land that she now claims. That included the chapel wall, other walls behind which had been the artists’ stores and the remaining pieces of the Wanjau sculpture, which she considered no better than garbage to be junked. 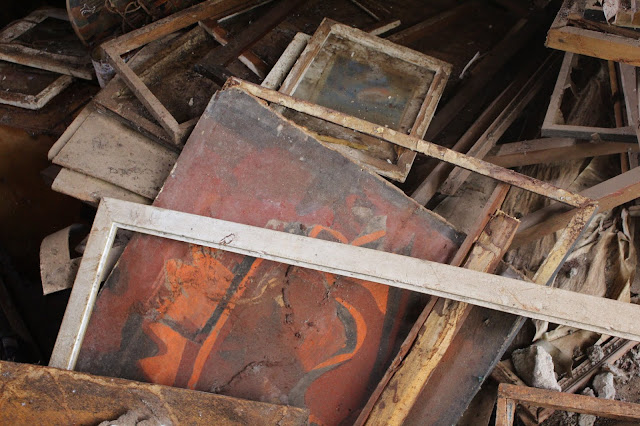 Ironically, the gang of ten also bashed down several metres of the mabati fence. Initially, it was a mystery why they would tear down the very fence that Rebecca had originally put up. But then, Njuguna says the first demarcation was inaccurate. It supposedly short-changed Rebecca who is now claiming more PYP land according to her surveyor’s measurements.
This week on Tuesday, Rebecca’s gang returned, again without notifying Elimo they were on PYP land. But when he was informed by his second wife Phillda that they were still around, he found the men dragging parts of the Freedom Fighter off their boss’s side of the grounds back over to Elimo’s
“They’d already broken off one of his arms. By the time I found him, he had lost another arm and a hand,” says Phillda who further observed that “parts of the statue are still on the other side of the fence.” 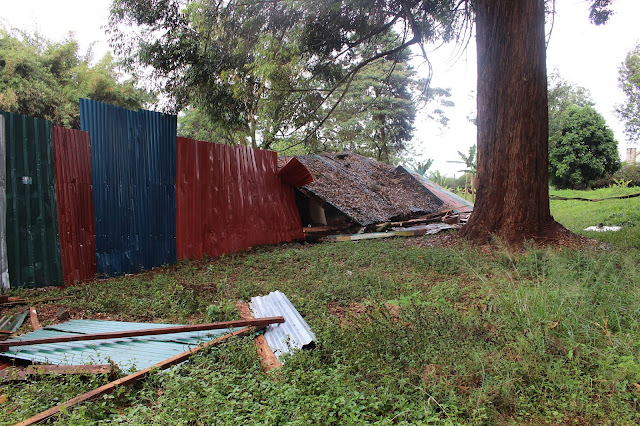 So the restorers will have quite a task to reconstruct Wanjau’s masterpiece when and if funds are found to conduct the required artistic ‘surgery’ of putting him back together again.
One can hardly blame members of the gang who were merely employees (some might call them mercenaries) of the estranged wife. But the way they have treated a piece of art that many feel should be seen as an historic relic of an important period in Kenyan life is nothing if not philistine.
Clearly the case of the Freedom Fighter and the Paa ya Paa land are unresolved. One only hopes the Kenyan public, or even the family of Wanjau will come forward to find out if the elder’s Mau Mau can be brought back to life. 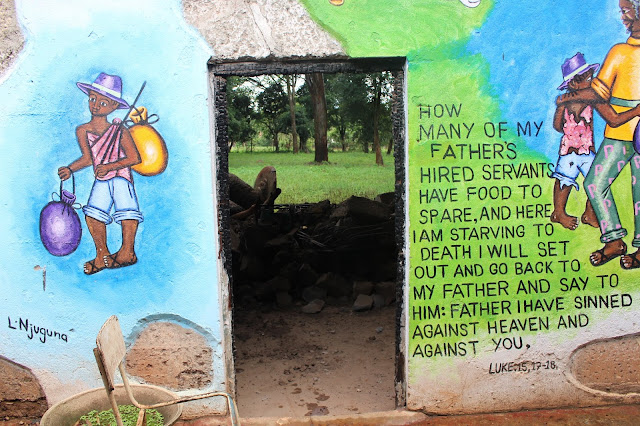 Posted by Margaretta wa Gacheru at 12:14