CREATING LIONS OUT OF AIRPLANE PARTS 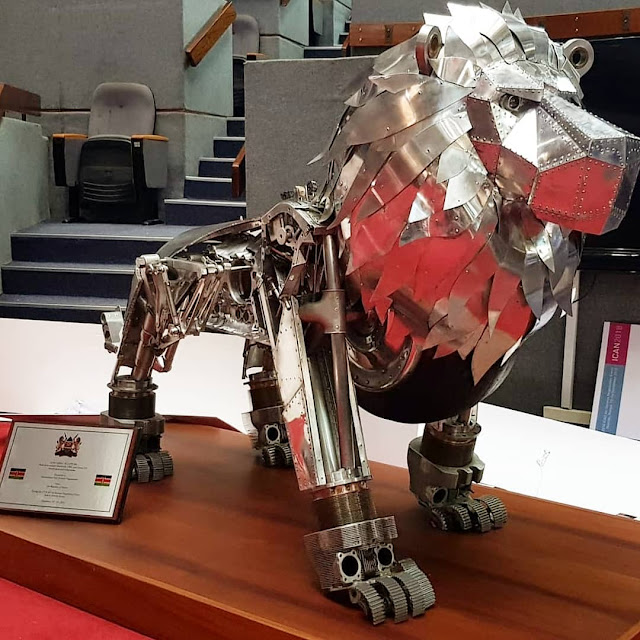 Creating functional art out of airplane parts isn’t a practice that either Samuel Omondi or his pal Khan Key had planned on doing once they’d arrived back in Kenya after years overseas.
Both had grown up in Nairobi and gone abroad to study architecture in the US. But neither one was certain that was the profession they wanted to pursue. And so they chose instead to go camping out in more remote areas of the country.
“We were camping up in Turkana when we found this old abandoned airplane. It belonged to no one in the area so we decided to take it home,” says Sam who identifies that moment as the time when their first company Air Décor was about to take off.
“We dismantled the plane and were just playing around when we decided to make furniture out of it,” Sam adds.
They were amazed that at their first exhibition in Village Market, all their furniture sold. “It was then that we decided to start our own company.” 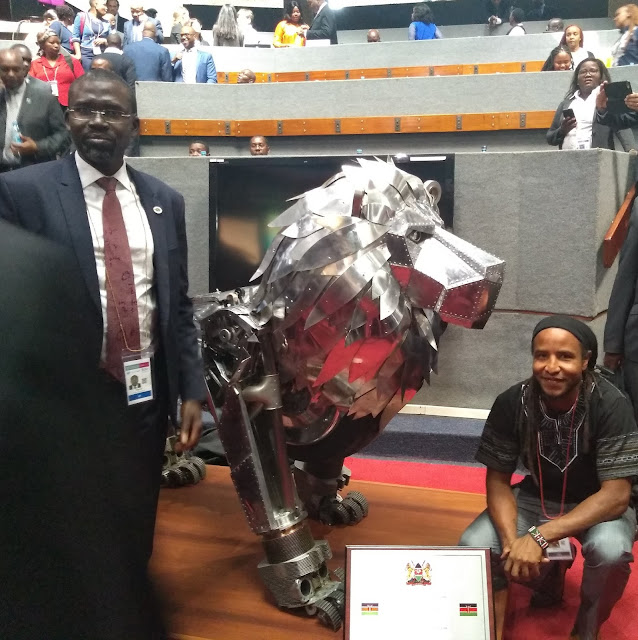 Sam admits his parents initially weren’t for the idea. But they’re okay with it now that Sky Decor has had one success after another. They’ve had exhibitions everywhere from Karen and Village Market to Alliance Francaise and Junction.
Most recently, their airplane art was on display at KICC, at the opening of last week’s International Civil Aviation Organization conference. Their lion was the welcoming gift President Kenyatta gave to the president of the ICAO.
‘We were contacted sometime back by people from the Kenya Civil Aviation Authority, requesting that we create a life-size lion out of airplane parts,” says Sam whose partner Chan is currently in South Korea negotiating their first exhibition in the land of Chan’s forefathers.
They’ve already exhibited their functional art everywhere from Switzerland and Paris, France to Cape Town. But this will be the first time they’ve shipped it so far east.
The lion is also the first commission that they had received from the Kenya government. But seriously, what could have been a more appropriate gift to give the ICAO boss than a sculpture made out of airplane parts. And what better type of sculpture to give than a Lion, ‘the pride of Africa’.
Sam says that to create the lion, they extracted parts from two airplanes, a Cessna 310 and a Beachcraft 1900C. Out of them, they created a creature that is larger than life: the lion is approximately 2.3 metres long (seven feet) and 1.4 metres (five feet) tall.
It’s made mostly of aluminium parts and attached with steel nuts and bolts. Most of their home furnishing are made with a mix of aluminum, mahogany wood and glass, he says. But the lion was special. 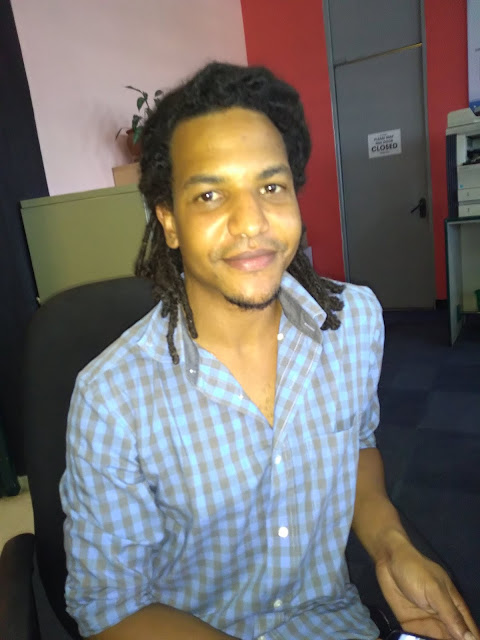 “The legs were made with the Cessna’s landing gears while the Cessna’s engine was used to construct its torso,” he recalls. “And the tail, back, head and mane were all made out of the Beachcraft’s fusillade.”
By the time the lion was complete, the Kenya government couldn’t have been happier. It promised to recompense the artists well although they haven’t been paid yet. One hopes they don’t encounter the same problem of nonpayment that the sculpture Elkana Ong'esa has endured after he constructed an elephant for the Smithsonian Institution’s 2016 summer festival in Washington, DC. Elkana is still waiting.
Sky Décor has been thriving from the time they got started back in 2013. Nonetheless, one can’t help but ask where they get airplanes to deconstruct, especially as airplanes are expensive vehicles.
“You’d be surprised, but some plane owners are willing to give their decommissioned aircraft away for free,” says Sam, adding that a few pilots actually have several old airplanes lying around just waiting to be taking away. They do the owners a favor in a sense but removing from their grounds with no cost to the owner.
He explained that most airplanes have a ‘shelf-life’ after which they are decommissioned by the KCAA. 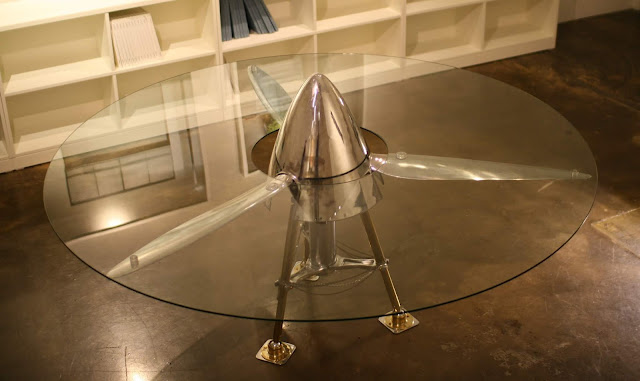 “We get most of our planes from either Wilson or Orly airport in Kisarian,” he says. There’s at least one other airplane graveyard up at Turkana but we have explored it as yet,” he adds.
It took Sam and key five whole weeks to create the government lion, but the challenge of its creation was well worth it.
“Our most popular piece of furniture that we make is the propeller table with a glass top, but we do see our furniture as functional art,” he adds.


Posted by Margaretta wa Gacheru at 03:31