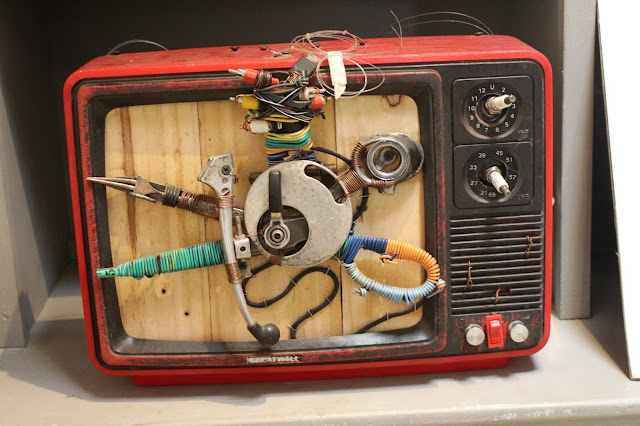 Is it the holiday season that’s inspired so many artists to hold exhibitions this month? And is it a sense of adventure that’s caused quite a few to find new venues rather than wait in line for a space at one of the more established spaces, like Alliance Francaise, One Off, Circle Art or Red Hill Galleries?
Those established venues organize their programs well in advance. As such, One Off is currently hosting Peterson Kamwathi with his three KU mates, Martin Musyoka, Victor Mwangi and David Mucai. 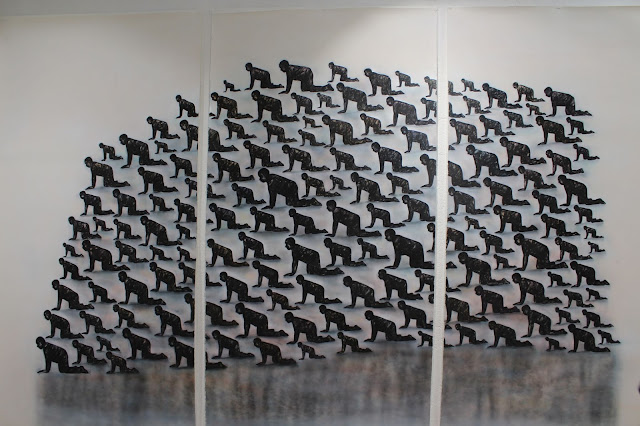 Circle Art is featuring 15 artists from Zimbabwe. Red Hill just opened with a solo show of works by Joseph Cartoon and Alliance Francaise, which is celebrating the 70 anniversary of the UN Declaration of Human Rights this week, is also featuring an amazing exhibition of graphite drawings by Nicholas Odhiambo entitled ‘Pedagogy of Oppression’ (echoing Paulo Freire’s Pedagogy of the Oppressed). 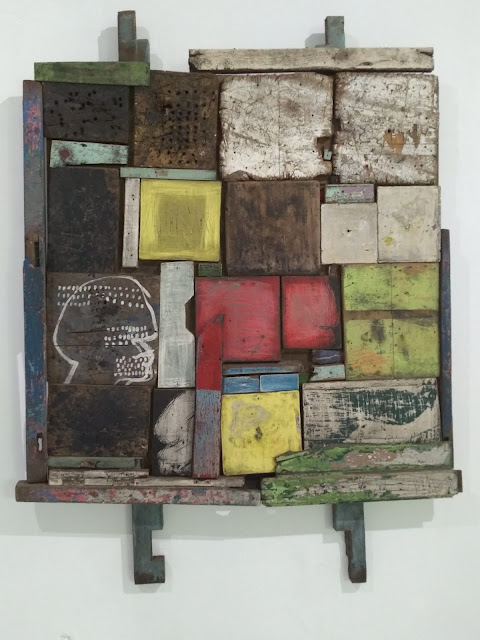 So artists like David Maina and Munene Kariithi have a show at the Karen Landmark building entitled ‘City Faces’.  They are exhibiting under the umbrella of After5Art.ke which began showing Kenyan art several months back. Their exhibition space is in Merita Technologies which isn’t vast. But MT had plenty of empty wall space which worked well for Maina and Munene whose show is running through the weekend.
But that’s just one of the new spaces that has recently opened up to showcase young artists’ works. Out in Kitengela, Chelenge van Rampelberg just teamed up with the Banana Hill Art Gallery (another established gallery that’s booked up way in advance) to open her gracious rustic place and set up a new gallery that she’s calling Chelenge’s Home Studio. 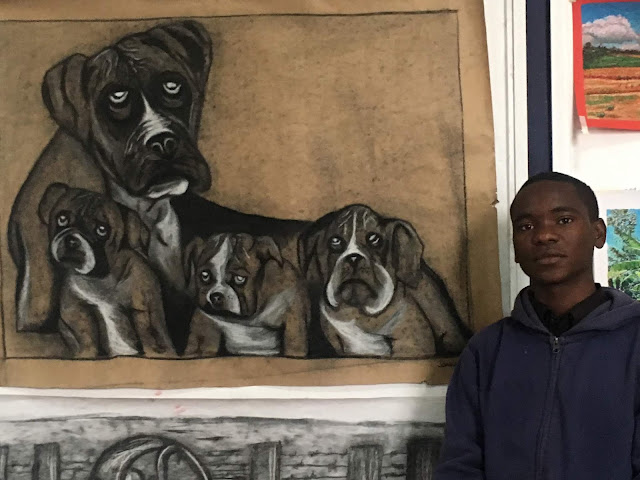 Interestingly enough, Chelenge isn’t the only artist who has set up their own public viewing space. Jeffie Magina has opened his Studio Soku for public displays as has Joan Otieno who often holds wear-able [junk] art fashion shows at her Warembo Wasanii Initiative in Kariobangi North.
Restaurants have often been known to feature Kenyan artworks. Now the new eatery in Garden Estate called 45 Degrees is featuring an exhibition of new works by Evans Ngure, Samuel Njuguna, Anwar Sadat and Milena.
And while the Carnivore is mainly renowned for its food and music fetes, Pascal Chuma currently has a one-man exhibition there in time for the pre-holiday festivities.
Malls are also open occasionally to hosting art exhibitions which is what the Lavington Mall did last weekend when a group of young artists, one as young as 12, had an impromptu show.  It was instigated by a mother, Dr Irum Mirza who feels strongly that her son Hariz has real talent. She’d been told by his teachers as much ever since he was five. So the mom rented space in the mall and the lad put up his work to ideally elicit a positive public response. 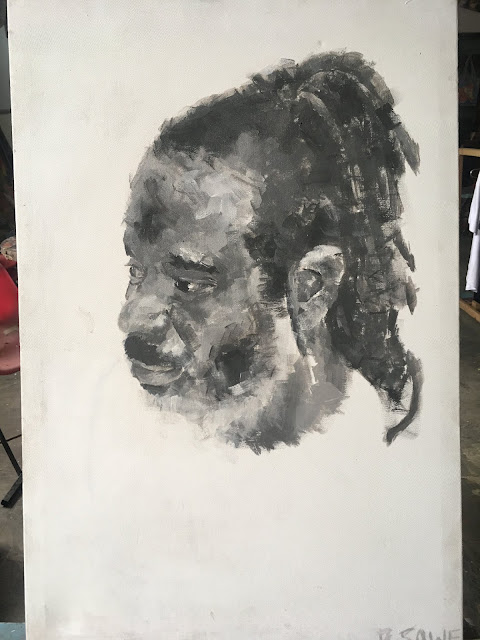 And speaking of Malls, at the Rosslyn Riviera, the two-man exhibition entitled ‘Boundaries’ featuring the works of Carbon Mwini and Eltayeb Dawelbait obliterated the assumption that malls were not places for art, only for food, jewelry, clothes and home appliances.
There are several new galleries prepared to adjust their schedules to accommodate artists who are keen on being exhibited. Polka Dot Gallery displays that sort of flexibility which is beneficial to both the artists and Lara Ray who opens her art space to a wide range of Kenyan artists who in turn have attracted a widening audience to come to the Souk in Karen where Polka Dot is based.
Currently the ‘Un-found’ exhibition features several artists who specialize in upcycling. One is Evans Ngure who has previously referred to himself as a ‘junk artist’, but Polka Dot’s manager Tewa Thaddu prefers the trendy term ‘upcycling’. It simply means taking found objects or junk, basically scavenged materials that artists collect from here and there, and then transforming them into works of art. 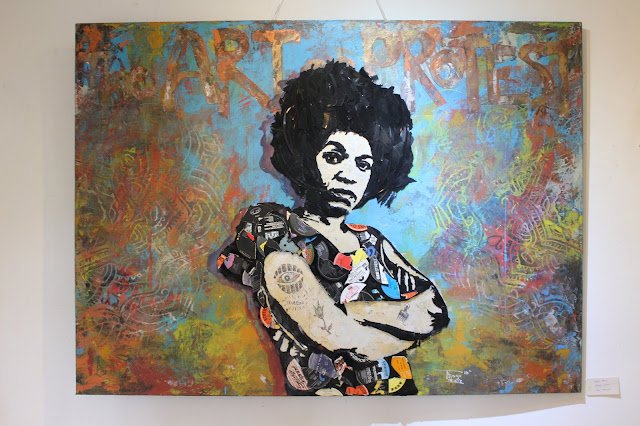 Evans is there with Leena Shah, Rogan Anjuli, Lionel Garang and Njogu Kuria. All have upcycled various materials to create a fascinating show.
The other flexible art space that is attracting wider audiences with every exhibition they hold is at the Kobo Trust where the gallery is currently displaying the artworks of Patrick Kinuthia and Kennedy Kinyua. 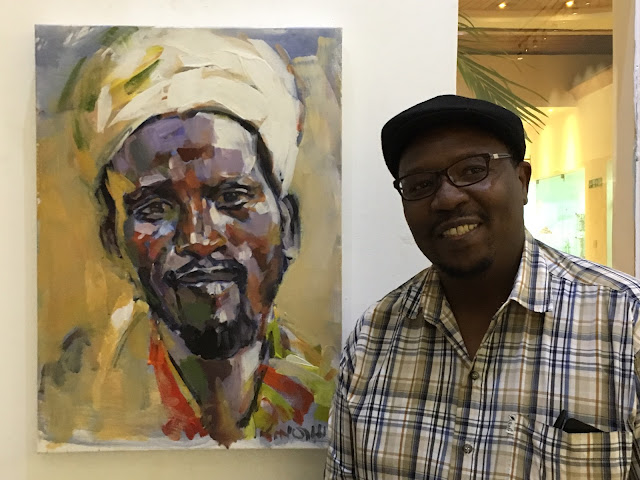 The show was meant to be for Patrick alone but as he’s become something of a mentor to Kinyua, he wanted to give the younger artist an opportunity to be seen, especially as he’s experimenting with new subjects and styles.
So with the holidays coming, keep in mind that artwork makes an excellent gift. 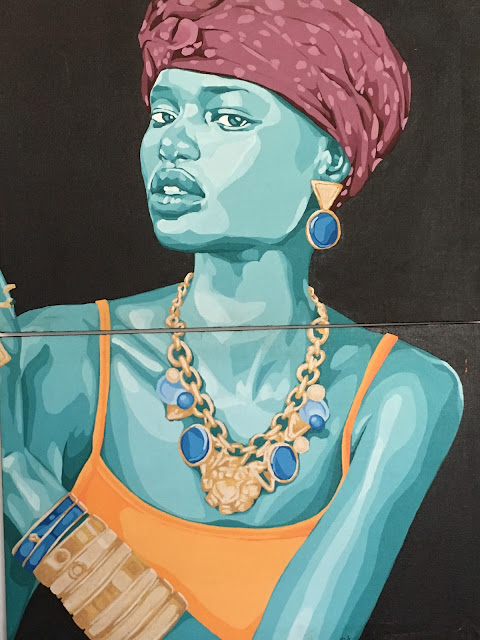 Nduta Kariuki and Jess Atieno are both featured in the newly released Radiobook Rwanda
Posted by Margaretta wa Gacheru at 09:33